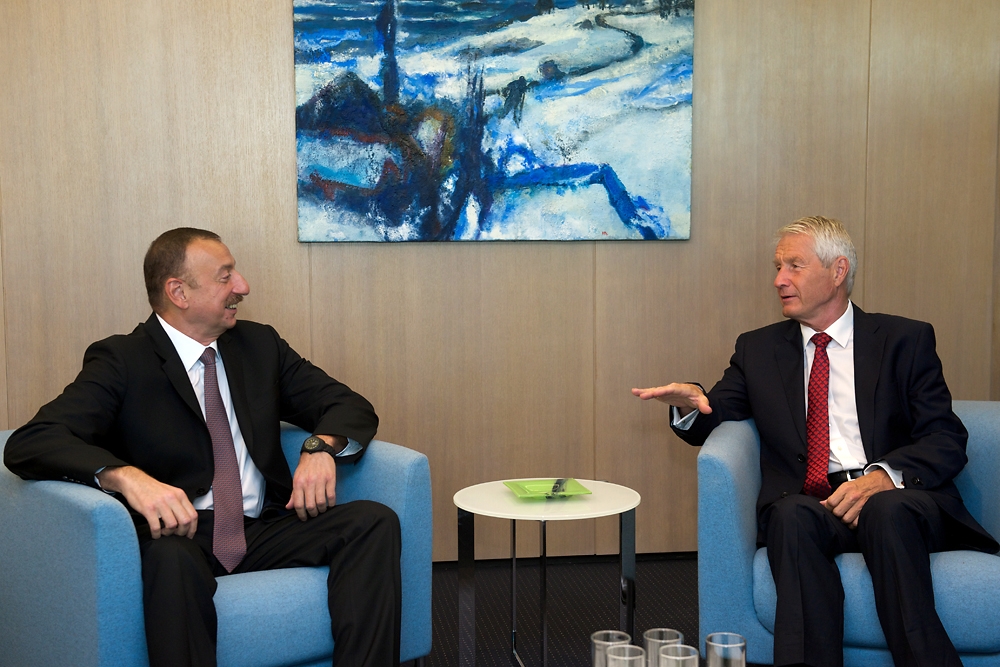 Azerbaijani President Ilham Aliyev (left) meets with Thorbjørn Jagland, Secretary General of the Council of Europe, during a parliamentary assembly session in June 2014. The two leaders recently agreed on the resumption of negotiations between civil society groups and the Azeri government in the form of a Joint Working Group on human rights. (Photo: Sandro Weltin/Council of Europe)

Azerbaijan’s efforts to use its energy wealth to win friends and influence opinion in the United States and European Union are well documented. Far less attention has been paid to Baku’s suspected efforts aimed at co-opting rights advocates inside Azerbaijan.

There are indications that the blurry line separating NGOs and GONGOs in Azerbaijan is paying dividends for the government in Baku. Officials in recent months have broadened a crackdown on rights activists and independent journalists. Yet, the United States and the Council of Europe, the intergovernmental body whose Committee of Ministers Azerbaijan heads until November 13, both hailed the working group’s reemergence as a promising sign that the Azerbaijani government may be ready to turn a corner on rights-related issues.

Independent-minded observers in Baku are quick to point out that the Joint Working Group is a government-heavy entity. It comprises seven state officials, including Fuad Alasgarov, a top presidential aide, and Chingiz Asgarov, Azerbaijan’s representative at the European Court of Human Rights. In addition, there are two pro-government MPs, one Constitutional Court justice and three members of the president’s Council on State Support for Non-Governmental Organizations on the panel. It also has seven individuals billed as NGO representatives. [For a list of the seven representatives, see the editor’s note below].

Questions about the independence of the group’s seven NGO representatives are connected to the matter of state handouts to supposedly non-governmental entities. The government has curtailed the ability of NGOs to obtain funding from foreign sources over the past few years, while at the same time it has increased the amount of state funds available to NGOs. The amount allocated in the 2015 budget, about $7.6 million (or 6 million manats), is almost 50 percent more than the 2014 allocation.

Official data on which NGOs received state funding in 2014 was not immediately available.

Labor-rights activist Mirvari Gahramanli, who has worked for more than a decade in Azerbaijan’s NGO sector, asserts that the vast majority of the country’s roughly 3,000 registered NGOs are, in fact, GONGOs.

“The NGOs that are independent face persecution; many of them cannot function, as their bank accounts have been frozen and some of the NGO leaders are either in prison, or have had to leave the country in order to not face persecution,” said Gahramanli, who runs the Committee for the Defense of Oil Workers’ Rights.

Many independent Azerbaijani observers believe that, under existing conditions in Azerbaijan, some NGO members of the Joint Working Group have accepted financial support from the government, and thus their organizations should be classified as GONGOs. But given the lack of transparency in the process, there is no way to be sure which organizations have compromised their independence. What is certain is that the picture is not black-and-white, underscored by the fact that Gahramanli herself sits on the Joint Working Group.

Gahramanli is far from the only observer who has voiced suspicions about the role of GONGOs in the Joint Working Group. The situation is so muddled that some have questioned Gahramanli’s loyalties.

Ten imprisoned Azerbaijanis, internationally recognized as political prisoners, recently released a public letter to complain that they cannot trust the intentions of all of the Joint Working Group’s civil-society representatives. Most of these individuals, the prisoners’ open letter claimed, only represent the government’s interests.

“I am convinced that many of the group members do not speak up about political prisoners and do not criticize the government for [exerting] pressure on civil society,” one of the 35 signatories, human-rights activist Gunay Ismayilova, told EurasiaNet.org. “Why should we believe that they will defend them when they meet with the government?”

Some question how open the group’s NGO representatives are to outside scrutiny. Investigative journalist Khadija Ismayilova, an outspoken government critic who previously has worked for EurasiaNet.org, was invited to the Joint Working Group’s first meeting on October 22, but, at the last minute, was blocked from attending. She alleged on Facebook that, based on a conversation with a government official, she was barred because of objections from civil-society representatives on the panel.

One of the Joint Working Group’s presidential council representatives, Sahib Mammadov, is dismissive of the criticism, contending that those who attack the group’s civil-society representatives are inexperienced. “Negotiating with the government cannot be considered the behavior of a GONGO,” argued Mammadov, who heads the Citizens' Labor-Rights Protection League and is a member of the president’s Council on State Support for Non-Governmental Organizations. “To reach a result, you need to talk to the government.”

A Joint Working Group civil-society representative singled out in the prisoners’ letter for criticism, Novella Jafaroglu, chair of the Dilara Aliyeva Society for Women's Rights, commented to RFE/RL’s Azerbaijani service that the prisoners lacked up-to-date information. “We are not offended by them. We are just surprised at the people who asked them to sign this letter,” she said.

So far, the debate over the influence of GONGOs within the Joint Working Group does not appear to have dampened the international community’s public support for the body. In a November 3 op-ed published in The Guardian, Jagland cited the resumption of the group’s activities as among the “glimmers of hope” for Azerbaijan to correct “its poor human rights record.”

There are few concrete signs that the government is ready to ease up on civil society activists. Just the opposite; the crackdown seems to be continuing. A Baku court on October 29 sentenced another opposition journalist, Khalid Garayev, to jail on charges of alleged hooliganism and insubordination to police.

The seven civil-society representatives on the Joint Working Group are: Gahramanli of the Committee for the Defense of Oil Workers’ Rights; Arzu Abdullayeva of the Helsinki Citizens' Assembly, Azerbaijan National Committee; Saadat Bananyarli of the Azerbaijani section of the International Organization on Human Rights; Saida Gojamanli of the Human Rights and Legislation Protection Bureau; Novella Jafaroglu of the Dilara Aliyeva Society for Protection of Women Rights; and Zaliha Tahirova and Eldar Zeynalov, both of the Human Rights Center of Azerbaijan.