But in the chaos of their retreat last year, did Armenian soldiers even make maps of the mines they laid? Post-War Report. 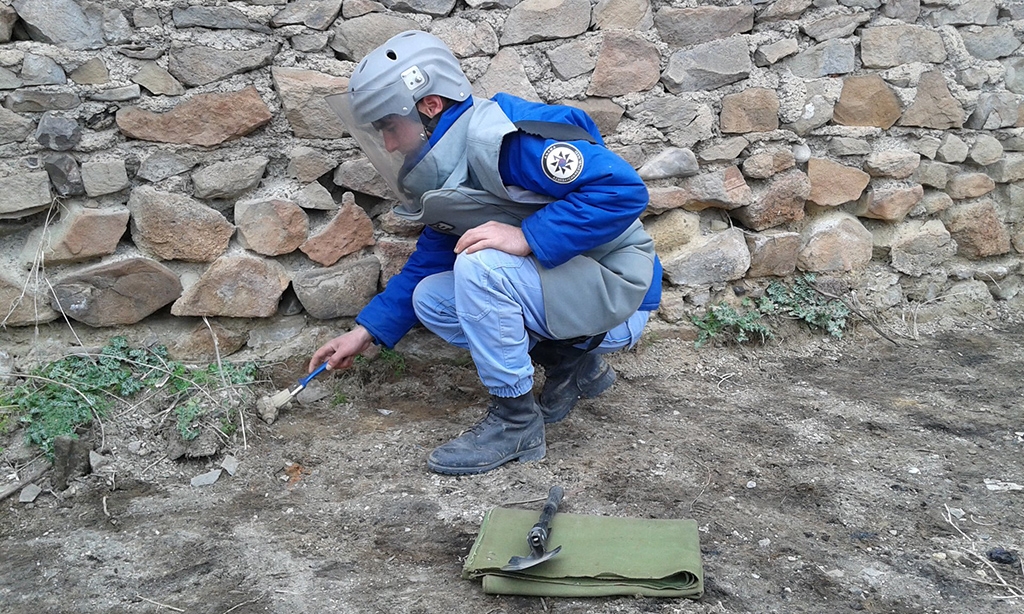 The death of two Azerbaijani journalists and a local government official in a land mine explosion has drawn attention to the ongoing danger of unexploded ordnance in the territories that Azerbaijan retook in the war last year. It also has added fuel to what has become Baku’s most vocal demand of Armenia since the war: that Yerevan hand over maps of the mines it laid during the war.

Azerbaijani officials bring up the issue of mine maps at every possible international forum, #FreeUsFromLandMines has become a ubiquitous hashtag on social media, and stories about Armenia’s refusal to hand over the maps dominate local media.

But do those maps even exist?

Unofficially, many Armenians say they don’t. Armenian analysts and commentators have been arguing that there are no such maps, that the mines laid in the war were scattered hastily as Armenian forces retreated, with no time for careful record-keeping.

“You need to understand that precise maps don’t exist – everything was ‘sown’ chaotically,” said journalist Yuri Manvelyan in an interview with RFE/RL published on June 6. “Even if the authorities in Yerevan, or someone in Stepanakert, or Russian peacekeepers, say that they have precise maps of minefields, it’s not true. That is, they physically don’t exist.”

Unnamed officials from both Armenia and the de facto Nagorno-Karabakh government told researchers from the International Crisis Group that “they have no such maps,” the organization noted in a report released this week.

But publicly, Armenian officials don’t make those kinds of denials, and instead have been avoiding the question. An official from Armenia’s Foreign Ministry declined to comment directly on why officials are keeping quiet about the existence or nonexistence of the maps. The official pointed Eurasianet to comments in April by then-spokesperson Anna Naghdalyan saying that the mine map issue is a “fake agenda” pushed by Baku to deflect attention from Azerbaijan’s continuing detention of close to 200 prisoners of war and other detainees. But she did not then address whether such maps exist.

Foreign diplomats, who may be in a better position to know about the existence of mine maps than the rest of us, have occasionally implied that they exist. United States Acting Assistant Secretary of State Philip Reeker, who visited both Azerbaijan and Armenia this week, was asked in Baku about the mine maps: "We’ve called on Armenia to provide maps ... all maps should be provided," he said. "We’ve called for (repeatedly) the release of those detained…[and] the release of maps of landmines ... so that we can begin and support the process of demining to avoid the kind of horrific injuries and incidents we’ve seen." Reeker’s comments in Yerevan did not touch on mine maps.

Russian Foreign Minister Sergey Lavrov, on his own tour of the region a month earlier, seemed to even more explicitly confirm the existence of the maps. "We discussed this issue [of minefield maps] a couple of days ago in Yerevan,” he said in Baku on May 11. “It seemed to me that the Armenian leadership has the understanding of the necessity to resolve this issue. The first preliminary steps in this direction were made, I informed Azerbaijan’s leadership of them. We hope that this process will be significantly accelerated and will allow this problem to be resolved completely.”

A May 18 European Union parliament resolution called on Armenia and Azerbaijan to cooperate on issues including “the provision of maps of minefields” and to “provide available maps of minefields to permit civilians to return to former conflict regions.” That somewhat cautious wording was echoed following the deaths of the journalists by EU spokesperson Peter Stano, who tweeted that “All information necessary for demining must be exchanged.”

Adding to the confusion is that there could in theory be two separate sets of maps, corresponding to the (at least) two significant periods of mine-laying: one, during the first war between the two sides in the 1990s, and the second during last fall’s 44-day war. Halo Trust, the international demining NGO, had been clearing Karabakh of mines for two decades after the first war and had done the job so thoroughly that the U.S. Agency for International Development eliminated their funding for the project in 2019, determining that the remaining mined areas were so remote that the resources spent on clearing them would be better used elsewhere.

Nevertheless, an Armenian veteran from the first war grabbed headlines this week after a snippet of a TV interview he had given earlier resurfaced; he claimed that that he had laid mines in Kelbajar and Lachin regions in the 1990s and that he had the maps Azerbaijan was looking for. “Return us our POWs and I will submit the map of the landmines,” he said. The interview was circulated widely in Azerbaijani social media as alleged evidence that Armenia had the maps and simply wasn’t giving them to Baku.

But even if that veteran were to hand over what maps he had, it likely wouldn’t help the situation much.

Most of the recent mine accidents that have taken place have occurred in relatively accessible places, including roads, suggesting that they are the result of newly laid mines placed as Armenian forces retreated from those territories last year. Little is publicly known about mine use in the recent war but there are hints; Halo Trust said in a post-war report that “[n]ew use of anti-vehicle mines has also been reported” and that “[t]he extent of landmine contamination from the current conflict is unknown.”

There is a possible third period of mining the territories: after the signing of the November 10 ceasefire. Some Azerbaijani sources have claimed that the mine that killed the journalists may have been placed recently. “Armenian saboteurs infiltrating Azerbaijani territories are planting new mines in Azerbaijani settlements and roads. As a result of these insidious and inhuman actions, civilians are killed and injured. Yet another tragedy happened on June 4,” the Azerbaijani state news agency Azertag wrote that day.

Claims like that have been bolstered by the fact that, a few days before the explosion, a group of Armenian soldiers was captured in the same area, in what Azerbaijan said was its territory, as they were laying mines. Armenia acknowledged that the soldiers were laying mines, but said that it was on its side of the border.

But Azerbaijan’s state prosecutor later, in a June 7 statement, said it had concluded that the mine was not laid by post-war sabotage operation but rather during last fall’s fighting. “The infiltration of enemy subversive groups and the planting of mines there are excluded as the preliminary investigation revealed that the Azerbaijani armed forces had full control over the area of ​​the incident,” the prosecutor’s office said.

What is beyond dispute is that the mine danger is real, and substantial. Those who died on June 4 – cameraman for the state television network Siraj Abyshov, Azertag reporter Maharram Ibrahimov, and Arif Aliyev, a local government official in Kelbajar – brought to 20 the number of Azerbaijani civilians who have died as a result of mine accidents since the end of the war. A further 29 have been injured.

Using land mines is a violation of international law, but neither Armenia nor Azerbaijan are among the more than 150 countries who have signed the Mine Ban Convention. Both argue that they can’t stop using mines until the other does. “Neither Armenia nor Azerbaijan has joined the mine ban treaty,” Giorgi Gogia, the associate director of the Europe and Central Asia Division of Human Rights Watch, told Eurasianet. “So joining the treaty, destroying the stockpiles and stopping using them should be first steps.”

Note: This piece was updated to include a confirmed version of Reeker's quote in Baku.