Baku is doubling down on claims Armenia is transporting weapons along the only road in or out of the region; Yerevan says the Azerbaijanis are faking the evidence. 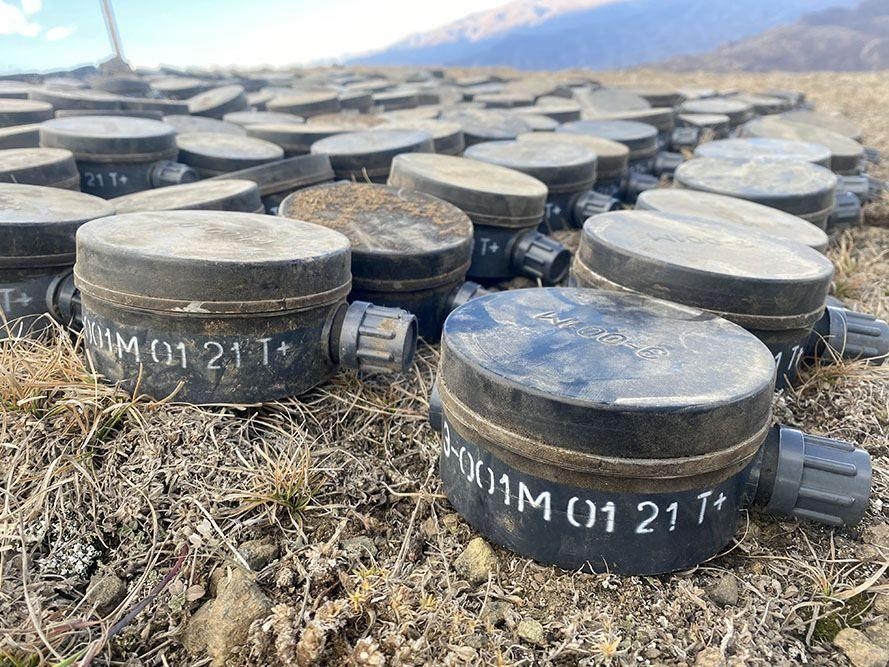 Top Azerbaijani diplomats have called on the United Nations Security Council to step in amid a growing standoff with neighboring Armenia, which they allege has sent thousands of landmines to Nagorno-Karabakh in contravention of agreements that ended the 2020 war between the two sides. The claims come as Baku continues to step up pressure on Armenia to come to an agreement over the status of the breakaway region and amid growing fears of a renewed military conflict.

In a series of communiques seen exclusively by Eurasianet, Azerbaijanis officials say that anti-personnel mines manufactured as recently as last year have been unearthed along the line of contact around Nagorno-Karabakh. In addition, they claim, booby traps were found in two villages handed back to Azerbaijan in recent months.

Azerbaijani authorities have discovered 2,728 Armenian-produced landmines in Azerbaijani territory since August 2022, Azerbaijani Foreign Minister Jeyhun Bayramov wrote in a November 28 letter to the Security Council. The letter has not yet been publicly released. “All of them were produced in Armenia in 2021 and thus have been planted by Armenia after it undertook commitments under the trilateral statement of 10 November 2020 to cease all its military activities against Azerbaijan,” he continued.

In another previously unseen report, shared with the UN Security Council earlier in November, Azerbaijan reported that 44 of their country’s soldiers and civilians have been killed by mines since the 2020 agreement, and a further 213 have been wounded. Statistics collected by International Crisis Group, a multinational NGO monitoring the conflict, have documented 139 people injured by mines on all sides during the same period.

Bayramov also claims that Armenia has refused to hand over full and accurate maps of where these devices have been planted, calling on the Security Council to “render support in mobilizing international assistance for Azerbaijan” to tackle the threat. Photographs accompanying the report show dozens of anti-personnel mines said to have been defused in recent weeks.

Azerbaijan has long relied on instruments of international law to make the case for its side in the conflict. Most prominently, it has pointed at four separate UN resolutions passed in 1993 that affirmed Baku’s sovereignty over Nagorno-Karabakh and called for Armenian forces to withdraw from the region. Meanwhile, organizations like the International Campaign to Ban Landmines have expressed “grave concern” about the risk anti-personnel mines pose to civilians.

The claims that new mine-laying is underway have not been independently verified, and Armenia has consistently denied that it is dispatching military hardware to Nagorno-Karabakh. Yerevan has instead claimed that the mines were taken from inside its own territory during a September Azerbaijani offensive in which Azerbaijani forces moved across the Armenian border.

“The mines displayed by Azerbaijan were found not in Nagorno-Karabakh, but in the sovereign territories of Armenia occupied in 2021-22,” Armenia Foreign Minister Ararat Mirzoyan said earlier in December in an interview with news agency Armenpress. “They now are trying to use these mines for propaganda purposes.” He went on to insist that Yerevan has handed over mine maps for use in the territory now controlled by Azerbaijan in Karabakh, while adding that “we do not deny that the armed forces of Armenia carry out mine-laying works in the sovereign territory of Armenia and this is due to the constant high risk of new military aggressions by Azerbaijan.”

Inside Azerbaijan’s internationally-recognized borders, Nagorno-Karabakh has been controlled by its ethnic Armenian majority since a war during the Soviet Union's collapse. However, in a 2020 offensive Azerbaijani forces recaptured large swathes of territory before a Moscow-brokered trilateral peace deal put a pause on the fighting. That agreement also stipulated the deployment of around 2,000 Russian peacekeepers to keep the status quo and monitor the Lachin Corridor – the only road linking Armenia and Nagorno-Karabakh.

Since then, Azerbaijan has undertaken a major effort to clear the territories it regained of landmines, which had been laid by both sides over the course of three decades. Armenia and Azerbaijan have both refused to sign up to international agreements around landmines, and neither is party to the Convention on the Prohibition of the Use, Stockpiling and Transfer of Anti-Personnel Mines. A number of international partners, including the United States, the UK and the United Nations Development Program have offered Azerbaijan support in training and equipping the teams dealing with unexploded ordnance.

The minelaying “threatens not just innocent lives, but the trust on which lasting peace between our two countries must eventually be built,” Azerbaijan Deputy Foreign Minister Elnur Mammadov told Eurasianet. “Hundreds of thousands of Azerbaijani families still cannot return home” because of the ongoing dangers. Over 600,000 Azerbaijanis were displaced from the Armenian-controlled territories in the 1990s.

Now, it appears Baku is intent on scrutinizing vehicles traveling from Armenia into Nagorno-Karabakh, which it claims are being used to ferry landmines and other weaponry to the breakaway region and calling into question the Russian peacekeeping force’s role in upholding the terms of the 2020 agreement.

At the same time, Azerbaijan has been putting pressure on the Lachin Corridor on several fronts, and on December 12 a group of self-described Azerbaijani environmental protestors staged a demonstration on the road, erecting tents and forcing traffic to slow to a halt as part of an escalating row over claims the highway is being used to illegally export gold mined in Armenian-controlled Nagorno-Karabakh.

The blockage sparked fears that Baku could be poised to choke off the sole route open to Armenians living in Karabakh but, following tense negotiations with the Russian peacekeeping forces, the road reopened after several hours.

Armenian Prime Minister Nikol Pashinyan warned in November that Aliyev’s increasing focus on the issue is an effort “to create grounds, invented grounds, for closing the Lachin Corridor, surrounding the Nagorno-Karabakh Armenians, and subjecting them to genocide and expatriation, under the pretext of Armenia not fulfilling its obligations.”

Hopes for a diplomatic solution to the three-decades long standoff had peaked after Pashinyan and Aliyev met for talks in Prague in October, with the Azerbaijani leader saying that a long-awaited settlement could be agreed “in principle by the end of the year.” Since then, though, negotiations have faltered, with Baku pulling out of a meeting over Yerevan’s insistence that French President Emmanuel Macron be involved in discussions. “I’m not sure we’ll be able to have a final version of a deal by the end of the year,” Mirzoyan explained in December, “but if that doesn’t happen, negotiations will continue.”