The authorities had forbidden opposition parties from organizing a rally in the center of the city, but they attempted to go ahead anyway. Scores were reportedly detained. 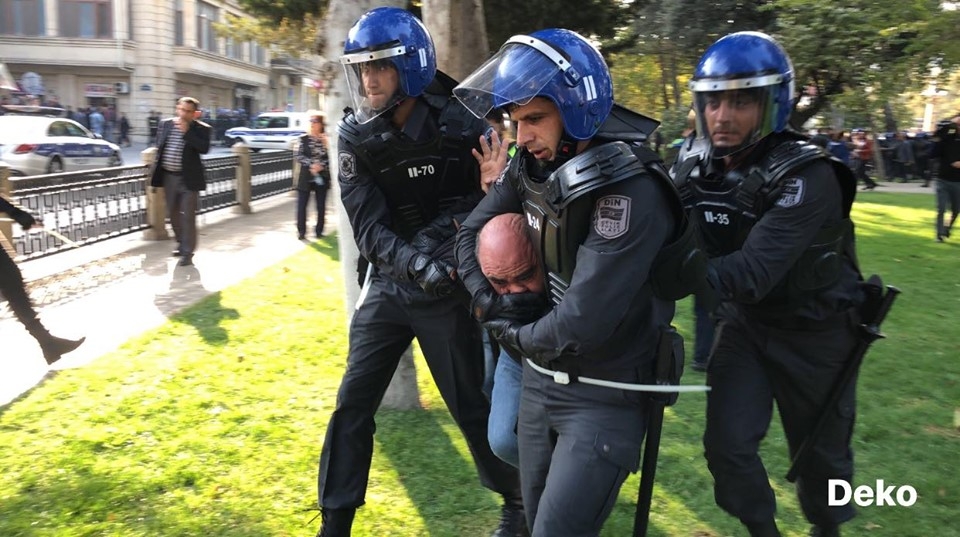 Azerbaijani police detained an opposition political leader as they harshly cracked down on an attempt to hold a rally in the center of Baku.

Ali Karimli, the chairperson of the Popular Front Party of Azerbaijan, was roughly detained by several police officers in riot gear as he walked with supporters, according to video shot at the scene.

The protest on October 19 was organized by the National Council of Democratic Forces, a coalition of opposition groups. City authorities had denied the organization a permit to hold a rally in central Baku, instead telling them to hold it in Lokbatan, a small settlement far outside the center.

The Ministry of Internal Affairs and the Prosecutor General's Office issued a warning about holding an unauthorized rally. “Law enforcement agencies will be authorized to prevent illegal actions and take serious measures, including criminal liability, for those who violate the law,” the notice said.

The Baku Metro stopped operating in three stations in the center – 28 May, Khatai, and Jafar Jabbarli – and notices warning about the rally were shown on the electronic screens in the train cars. Police cordoned off the area and internet was reportedly cut in the vicinity. Journalists also were preemptively blocked from entering the area.

Nevertheless some people managed to gather, chanting slogans including “Resign” and “Freedom.”

It wasn’t immediately clear how many people were taken in by police. “There are hundreds detained,” wrote one PFPA activist, Ilhan Huseyn, on his Facebook page. “Ambulances have been seen going to police stations. Contact them and try to get information.”

Some opposition figures were reportedly detained ahead of the rally and sentenced to administrative detentions, including prominent opposition journalist Seymour Hazi, who was sentenced to 10 days in prison. After it was over, an official from the ruling New Azerbaijan Party dismissed the protestors as paid stooges, "old people," and provocateurs.

Giyas Ibrahimov, a leftist activist and former political prisoner, told Eurasianet that his mother had been detained for nine hours in an apparent attempt to get information on him. “The purpose was to detain me, but first they tried to neutralize my mother,” he said.

“People were chanting ‘Resign,’ nothing else. The word ‘resign’ is a sensitive one for the government, they can’t stand hearing this word,” political analyst Rovshan Hajibayli told Eurasianet. “That’s why they showed this brutality.”

The authorities’ attempt to isolate the rally in a remote suburb was likely an effort to limit ordinary people’s exposure to opposition sentiments. But the crackdown may have increased ordinary Bakuvians’ sympathy for the opposition, said activist Bakhtiyar Hajiev in a Facebook post.

“A non-political citizen may not be able to support people chanting ‘Resign’ for two hours,” he wrote. “But when they see a person being beaten in front of their eyes, they immediately support the one who has suffered from injustice. Resisting injustice is a fundamental human reaction. This is basic politics, and the authorities should not be ignorant of it … but they do the opposite.”

The Azerbaijani authorities “continue to display blatant contempt for freedom of assembly in the country,” wrote Giorgi Gogia, the associate director for the Europe and Central Asia region for Human Rights Watch, wrote on Twitter. “Refusing peaceful gathering of opposition in Baku center, detaining dozens and closing metro stations leading to the venue in violation of its own laws and [international] obligations!”