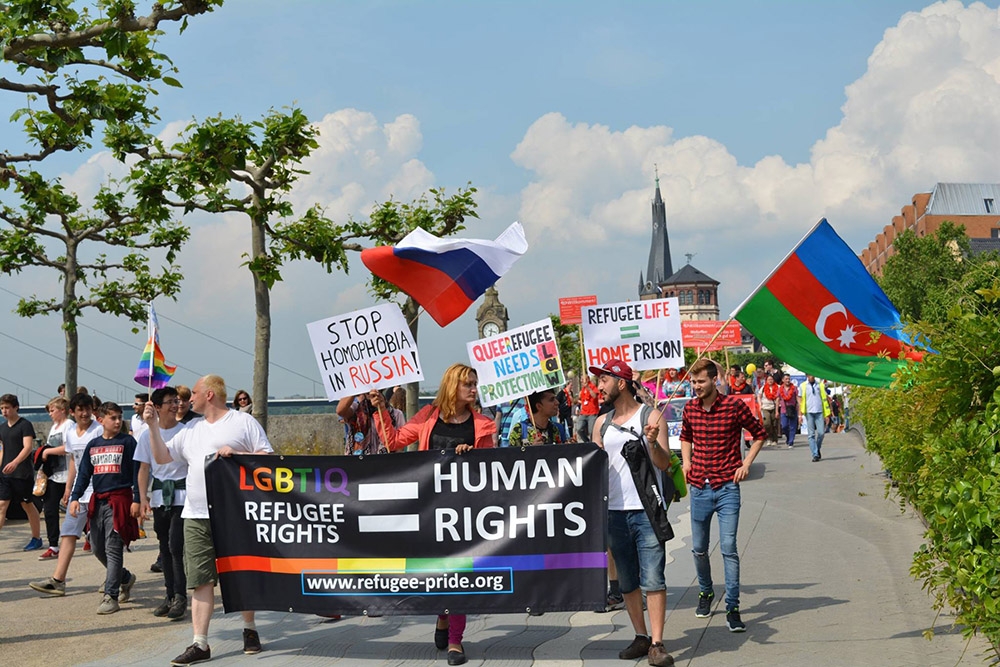 Crowd at a 2015 rally for Azerbaijani LGBT rights in Germany.

In mid-October, the mother of Nura, a transgender woman from a conservative village outside Baku, got an unexpected call from the precinct police office. “Your son is homosexual,” the officer said. “Are you going to renounce your son?”

The mother, who asked not to be named, said she refused. “Why should I do that,” she told the officer. Shortly after, Nura's brother was called in to the police station and made to sign a statement confirming that the family did not renounce Nura.

“This is pressure on my family. I really don’t understand what the police want from me,” Nura told Eurasianet.org. She is now in Turkey, where she fled after a large-scale crackdown on LGBT Azerbaijanis in September.

She was one of about 100 people arrested in a two-week series of raids in Baku. She said she was interrogated, beaten and tortured at the Organized Crime Unit, a branch of the Interior Ministry tasked with combatting terrorism, human trafficking, kidnapping, extortion, and other organized criminal activity.

“I would like to live in normal place where trans people are not being persecuted. But at the same time I cannot leave my family behind in Azerbaijan,” Nura said. “I’m afraid right now to go back, because the threat is not over, the police are still there and looking for everyone who is hidden or who has left the country.”

After an international outcry, the Azerbaijani authorities released all of the LGBT detainees in early October.

Eurasianet interviewed several of those who were caught up in the raids and found that pressure on them has continued.

Some have remained homeless after police pressured their landlords to evict them. Some have lost their jobs after police informed their employers about their sexual orientation. Nearly all of them are grappling with financial and medical problems.

There’s not much of a support network to speak of that members of the LGBT community in Azerbaijan can turn to, and communication is difficult. As a result, precise numbers and facts about the situation remain unclear.

At least two LGBT Azerbaijanis have committed suicide in the last month. On November 4, a teenaged boy jumped from the 17th floor of his apartment building in Baku. According to his friends, the cause was “the homophobia-based pressure of his family and society,” according to a statement issued by a Germany-based advocacy group, Nefes LGBT Azerbaijan Alliance.

And on November 17, a gay 17-year-old in Ganja, the second largest city in Azerbaijan, hanged himself. “He texted me and other friends: 'I’m leaving; this world isn’t for me,'” one of his friends, who asked not to be named, told Eurasianet. “He attached a photo of himself with a rope around his neck.”

In the period since the release of the detainees, more than 20 people have approached Nefes with requests for basic help, including appeals for food, warm clothes, and medicine.

Nefes also has recorded instances of continued harassment of LGBT sex workers. The group has documented cases in which police officers, having improperly accessed medical records, intimidate people with sexually transmitted diseases in order to obtain bribes, according to Gulnara Mehdiyeva, a Nefes member.

The scope of the crackdown appears to be widening. In Ganja, police detained and strip-searched LGBT people, and warned them “to leave the city, where they are not wanted,” reported Minority, the country’s only LGBT magazine, on October 14.

“This crackdown on the LGBT community opened our eyes to the reality,” Mehdiyeva said. “Now we can assess the real situation.”

Azerbaijan's LGBT community doesn't have experience in organizing, she added. “We've never encountered problems on this scale, that’s why we didn’t have clear mechanisms to respond,” she said. “But we've started to move forward.”

Lawyers and activists are trying, so far with little success, to hold the Azerbaijani authorities accountable for the crackdown. One local activist, Fira (he asked to be identified only by his first name), has written to Mehriban Aliyeva, the vice-president and the first lady, as well as to Western embassies in Baku, asking for comment on the pressure against LGBT Azerbaijanis. As a result, he said, his father was called in for questioning by the police, and his boyfriend was fired from his job.

“I will continue, even alone, I won't let them rest until we get our rights to freedom and equality,” Fira said.

In the meantime, he organizes regularly Saturday-night parties around Baku for LGBT people. “After every party, policemen go to the club owners and threaten to shut them down if they allow gays to enter,” he said. “Where should we go to hang out? Is it too much to come together and have fun once a week?”

Usubov responded by dismissing the idea that the detentions were linked to the detainees’ sexual orientation or gender identity, declaring that “the situation for LGBT rights in Azerbaijan is not fundamentally different from the rest of Europe.”

Usubov also contended that LGBT Azerbaijanis have attempted “to insulate themselves from liability for any wrongful acts committed in our country by bringing to the forefront their sexual orientation.”

In responding to a query from Eurasianet, Ehsan Zahidov, spokesmen for the Ministry of Internal Affairs, told Eurasianet that “what can be said is in our official statement” and hung up the phone.