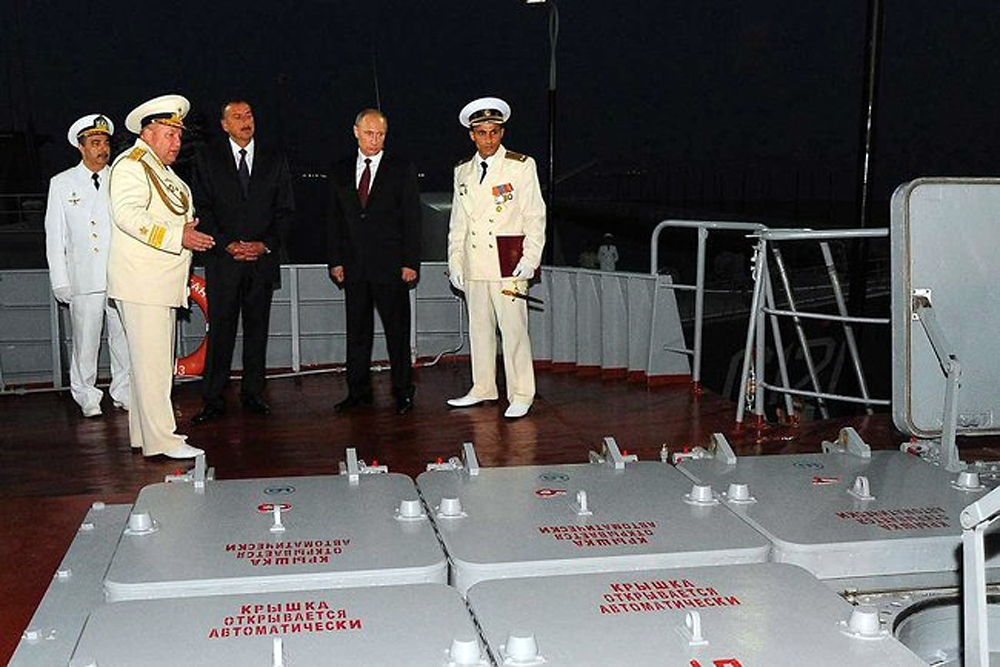 Warily watching Russia’s takeover of Crimea, Azerbaijani officials, politicians and analysts appear divided about what the crisis will mean for their own 26-year-long dispute with Armenia over the breakaway region of Nagorno Karabakh.

They agree on one thing: Russia’s role as a mediator in the Karabakh peace talks means that Baku must choose its responses carefully.

One high-ranking foreign ministry official, who asked not to be named, told EurasiaNet.org that Azerbaijan eventually may cut all contacts with Crimea; for instance, by “quietly” stopping Azerbaijan Airlines’ regular flights between Baku and Crimea’s main town, Simferopol.

“There is no decision yet, but I expect it,” the official said, citing as precedent Baku’s reactions to Kosovo’s 2008 declaration of independence from Serbia.

For now, though, no indication exists that that distaste for Russia’s actions in Crimea will prompt Baku to sever ties with the Organization for Security and Cooperation in Europe’s Minsk Group, the main vehicle for the Karabakh talks, co-chaired by Russia, the US and France. On March 18, Mammadyarov noted that plans are underway for a meeting next week with Armenian Foreign Minister Eduard Nalbandian in The Hague.

The US, for one, appears eager to encourage both Azerbaijan and Armenia to stay the course. The Minsk Group’s American co-chair, James Warlick, commented on Twitter on March 16 that, despite their differences over Ukraine, the US and Russia could still work together on a resolution to the Karabakh conflict.

Nonetheless, some Azerbaijani observers have their doubts about US or European interest in a settlement co-brokered by Russia.

In a March 12 interview with 1News.az, independent parliamentarian Rasim Musabekov, a political analyst whose views often coincide with those of the government, argued that the West’s battle with Russia over Crimea means that “the US and Europe’s attention to the Karabakh conflict will decline” in the short-term.

“I do not expect that, as a result of Crimea, the Western powers will insist on Azerbaijan’s territorial integrity more than before,” Musabekov said. No such action occurred after Russia’s 2008 war with Georgia over South Ossetia, he added. [Editor’s note: Rasum Musabekov formerly served as a board member of the Open Society Institute-Azerbaijan. EurasiaNet.org is operated under the auspices of the Open Society Foundation’s Central Eurasia Project, a separate part of the network of Open Society Foundations.]

In March 18 remarks to Azerbaijani journalists, however, US Ambassador Richard Morningstar underlined Western interest in Azerbaijan.

“What is taking place in Ukraine makes Azerbaijan’s relations with the US and EU even more important,” Ambassador Morningstar was cited by Russian-language local news outlets as saying. “The events in Ukraine show again why the Nagorno-Karabakh conflict must be resolved.”

In apparent connection with that show of interest, the ambassador also announced that US Secretary of State John Kerry intends to visit the South Caucasus. No exact date has been set, he added. The State Department has not made an announcement about such a trip.

Azerbaijan, conceivably, would only welcome the visit. Though the government is not expected to parade its ambitions publicly, the Ukraine crisis could increase Baku’s role as an alternative to Russia both for energy supplies to the European Union and as a conduit for the North Atlantic Treaty Organization to Afghanistan.

A visit by Secretary of State Kerry also could help soothe Azerbaijani officials apparently vexed that the international community has not demonstrated as much support for Azerbaijan’s territorial integrity as it has for Ukraine’s.

“So far, the European Union has not shown such a clear position concerning Nagorno Karabakh,” huffed Deputy Foreign Minister Araz Azimov on March 14 in response to international reactions to Crimea, the APA news agency reported.

Analyst Vafa Guluzade, a former top foreign-policy aide to the late Azerbaijani President Heydar Aliyev, though, believes that, overall, the standoff could have a positive effect on the South Caucasus region and the Nagorno-Karabakh peace process.

“First of all, there is no risk of war in Karabakh in the short-term, so long as neither side will dare to start it in the current situation,” Guluzade said. Moreover, he predicted, the US and France will intensify their attempts to resolve the conflict in order to diminish Russia’s role and influence in the region.

Among many Azerbaijanis, however, Armenia’s insistence on holding a referendum within Karabakh on the status of the primarily ethnic Armenian region is seen as a bigger obstacle than Russia to advancing the peace process. Azerbaijan opposes such a vote unless the thousands of ethnic Azeris forced to flee Karabakh during the 1988-1994 war can return home and take part, too.

MP Musabekov believes that Armenia will not draw parallels with Crimea to advance its arguments for a Karabakh referendum. Such parallels imply that outside help was needed to sever Baku’s control of the territory, he told 1News.az, while “[t]he Armenian position is that they solved their problems by themselves.”

Analyst Shahinoglu agrees. “Armenia would face strong resistance by the US and EU on this issue because it would justify Russia’s annexing Crimea,” he claimed. Russia, fearing further damage to its image, might opt to withhold support for the referendum as well, he speculated.

As yet, however, none of the co-chairs have given a sign of such positions. With so many factors in flux, predicted Shahinoglu, “the Crimea referendum is not going to have an immediate effect on Nagorno Karabakh.”