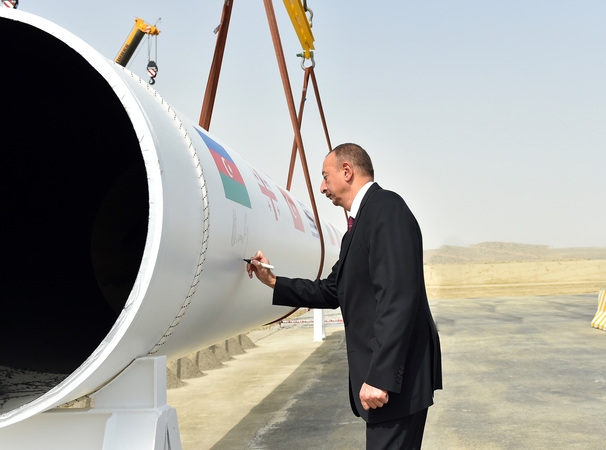 Azerbaijan President Ilham Aliyev at a 2014 ceremony inaugurating the Southern Gas Corridor. The project is a linchpin of the country's long-term economic strategy, but it's future has become less certain now that Azerbaijan has dropped out of the Extractive Industries Transparency Initiative. (photo: president.az)

Azerbaijan has decided to leave the Extractive Industries Transparency Initiative (EITI) after being suspended by the group for failure to meet the EITI board's demands to ease restrictions on civil society groups.

The dramatic move by Baku will force international financial institutions into a difficult choice: either abide by their promises to condition financial support on the human rights guarantees of the EITI, or put geopolitically important energy projects at risk.

At an EITI meeting in October, the group's board of directors said that Azerbaijan would have to carry out a number of reforms over the following four months in order to avoid suspension from the group.

On March 9, after another board meeting, the EITI said that Azerbaijan's progress had been unsatisfactory and that it would be suspended: "While the Board welcomed that Azerbaijan had taken further steps to meet the EITI Standard, it was assessed not to have fully met the corrective actions related to civil society space set by the Board in October."

Shortly afterwards, the State Oil Fund of the Republic of Azerbaijan issued a statement calling the EITI's move "unfair" and that it was dropping out of the initiative. The statement suggested that the EITI had shifted the goalposts by expanding its demands from transparency in the energy sector: "The irrelevant facts introduced by different advocacy groups on various occasions show that the Initiative failed to stick to its original mission and objectives." The statement continued:

In 2003 Azerbaijan has signed up to the principles of revenue transparency and revenue governance and remains strongly committed to those principles of good governance, transparency and accountability in extractive industries. Azerbaijan will continue to disclose all the information related to revenues received from extractive industries to the full extent. However, it is with a deep regret I have to officially announce that Azerbaijan is leaving EITI. I kindly ask the International Secretariat to remove Azerbaijan from the list of EITI implementing countries effective immediately. I wish you all success in your future endeavours.

Dropping out "was an emotional and definitely a fast decision," said Gubad Ibadoghlu, an Azerbaijani economist and a member of the EITI board, in an email interview with EurasiaNet. "Unfortunately Azerbaijan took a path in solving this problem by totally avoiding it."

The EITI is a coalition of states, oil companies, and non-governmental organizations aimed at improving the transparency of oil and gas revenues around the world. While its proscriptions are non-binding, international financial organizations like the World Bank and European Bank for Reconstruction and Development have pledged to take into consideration Azerbaijan's EITI status in determining whether or not to grant it loans.

Azerbaijan is banking on international loans to help it bankroll the Southern Gas Corridor, a multibillion-dollar project by which natural gas would be shipped to Europe. The project is a linchpin of Azerbaijan's long-term economic strategy.

But what impact dropping out of the EITI will have is unclear. In December, the Asian Infrastructure Investment Bank offered a $600 million loan for part of the project, and the World Bank promised another $800 million.

International financial institutions "have already decided to finance this project therefore, it does not seem Azerbaijan has much say in it," Ibadoghlu said. But he added that the country's credit rating, along with its international image, will take a hit nevertheless.

"The major investment decisions from multilaterals on the basis of profit have already been made, so the human rights angle plays an ultimately minor role," said Nicholas Trickett, a Eurasia energy analyst. "SOCAR's partners know that Azerbaijan doesn't follow western business norms and that human rights violations are endemic," he said, referring to Azerbaijan's state energy company.

Leading up to the meeting, Human Rights Watch had called on the EITI to suspend Azerbaijan. “The Azerbaijani government is snubbing the EITI by ignoring its requirements for reforms and by systematically dismantling the country’s independent civil society,” said Giorgi Gogia, the group's South Caucasus director. “Following numerous reviews and warnings, the EITI should suspend Azerbaijan’s further participation until the government makes serious, lasting changes to allow nongovernmental groups to operate freely in Azerbaijan.”

The National Resource Governance Institute, an advocacy group that works on the EITI, welcomed the decision to suspend Azerbaijan. "Ensuring protection for civil society in Azerbaijan, especially those working on EITI and natural resource governance, is now more critical than ever," the group said in a statement.