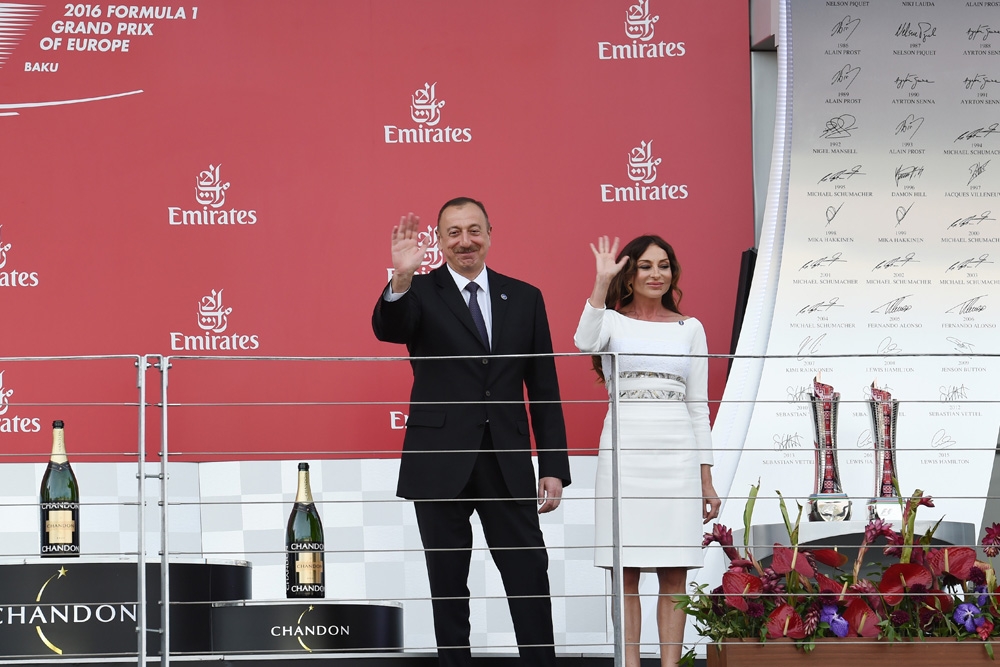 Azerbaijan’s President Ilham Aliyev and First Lady Mehriban Aliyeva at a Grand Prix auto race in Baku. Azeri authorities spent tens of millions of dollars on the race, which critics derided as a vanity project that satisfied the leadership’s craving for international attention, despite indications that government finances are tight and Azerbaijan’s economy could spin out. (Photo: Azerbaijani Presidential Press Service)

Just a few months ago, authorities in Azerbaijan spent tens of millions of dollars on hosting a Grand Prix auto race, which critics derided as a vanity project that satisfied the leadership’s craving for international attention, but did not produce any tangible benefits for the general population. Now, there are several indicators that government finances are tight and Azerbaijan’s economy could spin out.

The clearest sign of Azerbaijan’s fiscal vulnerability is the late-August move by commercial banks to suspend the sale of foreign currency, specifically US dollars. In the weeks leading up to the suspension, demand for dollars spiked, thus causing the Azerbaijani currency, the manat, to slide.

The manat’s summer woes fuelled fears that the government would carry out the third devaluation of the national currency since the winter of 2015. In September 2014, the manat traded at 0.78 to the US dollar. The rate on September 7, 2016, was 1.66 per dollar. The Central Bank in late August, prior to the suspension of foreign currency sales, characterized devaluation fears as “groundless.”

Beyond the currency question, there is growing concern about the state of government finances. Over the past few years, President Ilham Aliyev’s administration has gained a reputation for being among the most repressive leaderships in Eurasia. Accordingly, it maintains tight control over the flow of information, which makes it difficult to determine the full extent of the financial crisis confronting the government.

Yet all visible signs indicate that the state budget is under tremendous strain. According to Fitch Ratings, the government has halted most spending on infrastructure and other capital projects. Authorities are also hastily assembling a privatization program in the hopes of bringing in additional revenue.

Officials have scheduled three privatization auctions this month (September 14, 20, 26) for stakes in 191 properties. No estimate has been released for the total value of these shares. In January, Finance Minister Samir Sharifov stated, though, that the government planned to bring in about 100 million manats (over $60.1 million) from the sales, news agencies reported.

The State Committee on Property Issues has launched a portal to provide information about the properties up for sale. Officials also aim to hold online auctions in the hope that doing so will facilitate foreign investors’ participation.

But the portal is difficult to navigate and it appears to raise more questions about the process than it answers. The most significant obstacle for would-be foreign investors is the fact that that portal only has Azeri-language information about the offered properties. In addition, financial information for the listed properties appears to be denominated in British pounds, not US dollars or Euros, thus creating a conversion burden for many potential foreign investors.

The source of Azerbaijan’s economic challenges is the drastic decline in energy prices, which have led to a sharp decline over the past two years in revenue generated by oil and natural gas exports. The Aliyev administration’s chief response so far to the mounting economic troubles was a decree in July to form a Financial Stability Council. But in its almost two months of operation, the council has not made noticeable progress in promoting macroeconomic stability.

In the absence of government spending, the country’s non-energy-related economic sectors contracted at a rate of 5.4 percent during the first half of 2016, compared with the same period the previous year. The inflation rate, meanwhile, is estimated at 12 percent for this year.

It is not just the government that is struggling financially. Businesses and individuals are having increasing trouble meeting their obligations. According to the State Statistics Committee, the growth rate for non-performing loans stood at 15 percent rate during the first six months of 2016, totaling 1.53 billion manats, a figure approaching $1 billion at the current exchange rate. According to some reports, the current volume of non-performing loans exceeds one-third of bank capital in Azerbaijan.

While businesses and individuals may be walking a financial tightrope without a net, the government has considerable reserve funds with which it can use to plug financial gaps, funds accumulated during the bygone era when energy exports reaped windfall profits. In addition to Central Bank reserves, authorities can also draw on the State Oil Fund of Azerbaijan (SOFAZ).

The Central Bank said its foreign exchange reserves stood at $4.19 billion as of September 1, a modest increase from the 2016 low-point of $4.02 billion the bank reported in February. However, the 2016 monthly totals are markedly less than the Bank’s reserves just a few years ago. In July of 2014, the reserves hit its all-time high of $15.19 billion. The Bank squandered much of its exchange cushion in an ill-fated attempt to prop up the manat.

Ultimately, the government will be facing tough choices over the coming year. Prices for oil and natural gas, the export of which is the Azerbaijani government’s critical source of revenue, are expected to remain flat. Given that Azerbaijan is not projected to significantly raise its oil and gas production volumes, government revenue should continue to fall short of initial projections.

The best path out of the fiscal pit the country now finds itself in would be to liberalize the economy, and promote diversification with the aim of weaning it from its dependence on energy exports. But liberalization would require the Aliyev administration to make dramatic changes in its authoritarian ways, and it has yet to send any signals it is willing to do so.