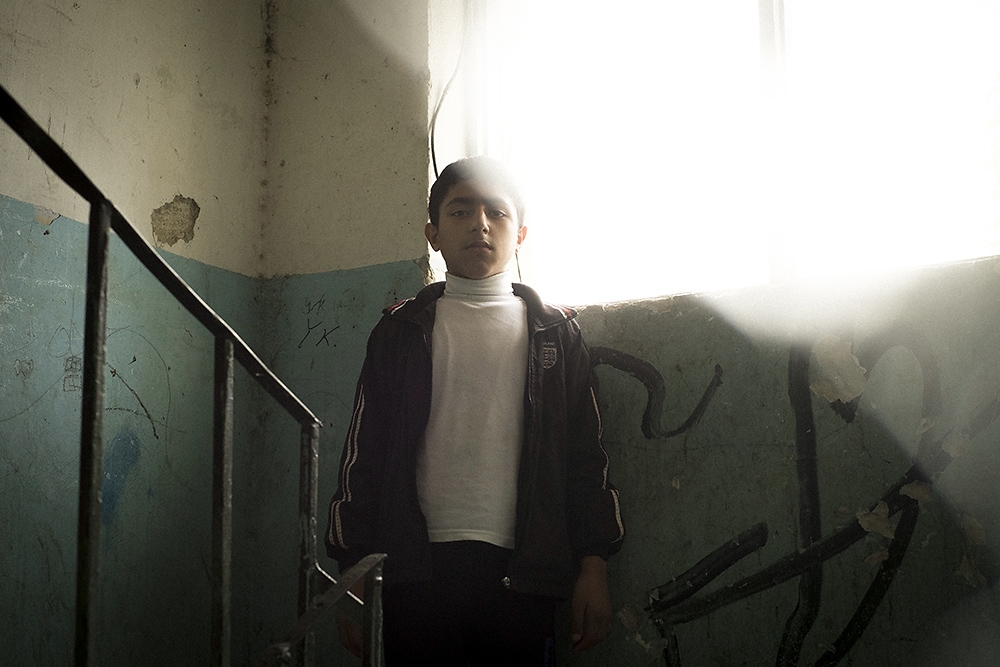 Ali, who lives in a Baku dormitory for refugees, says he does not attend school because he suffers from a speech impediment. 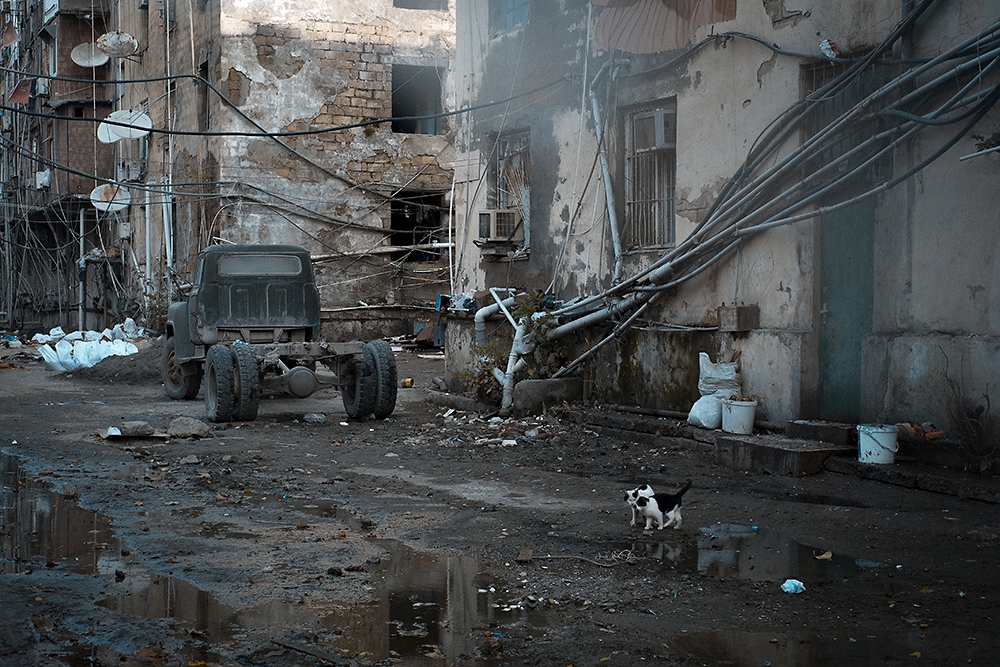 In 1993 the former dormitory of Azerbaijan State Technical University was turned into a settlement of about 1,000 IDP families. 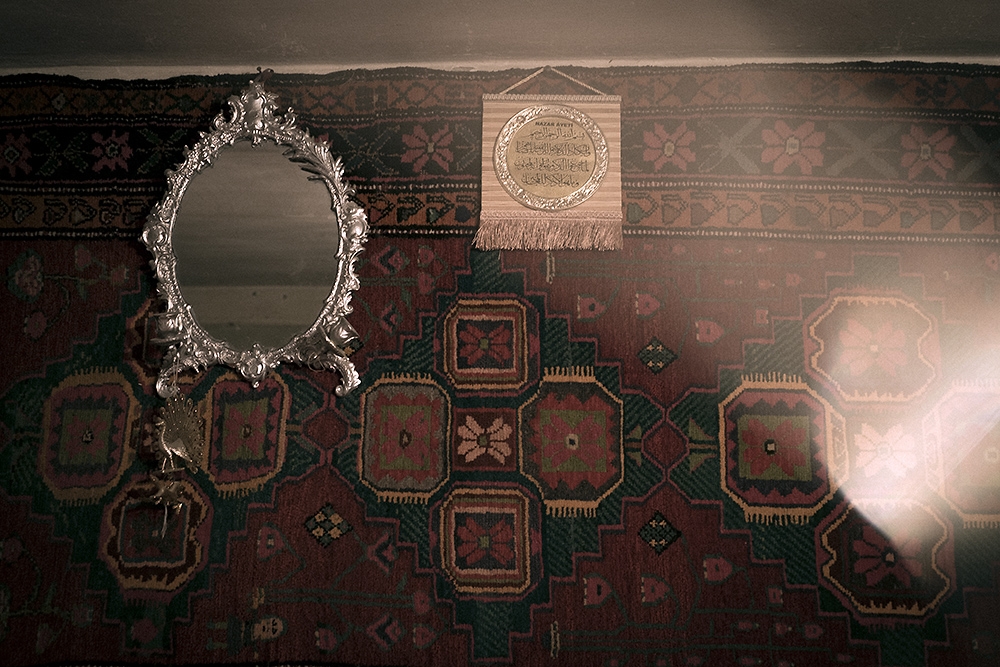 Maryam Huseynova, a refugee from Fizuli, lives with her two sons, their wives and five other people in a two-room apartment. 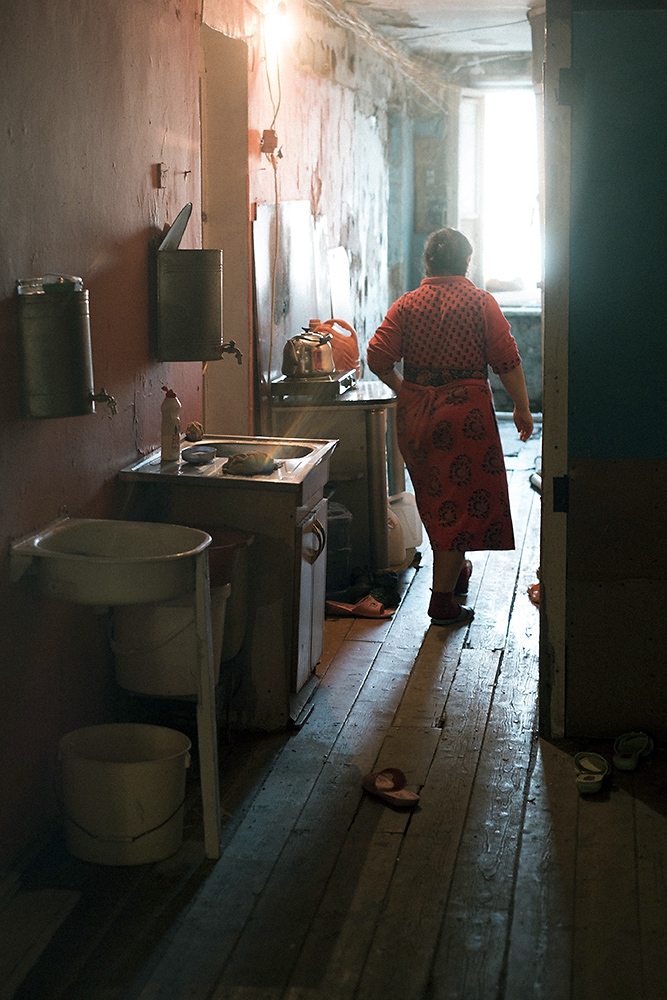 Filyar Khanum cooks in a hallway using a stove and sink shared in one of the dorms. 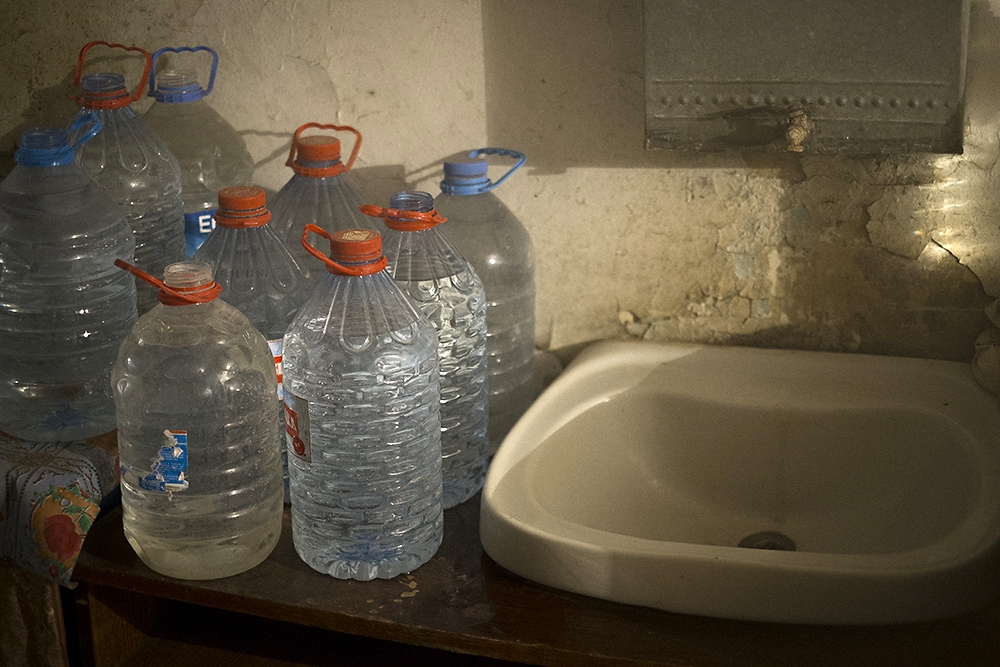 With no indoor potable water source, dorm residents collect water outside in plastic bottles to be used for daily needs. 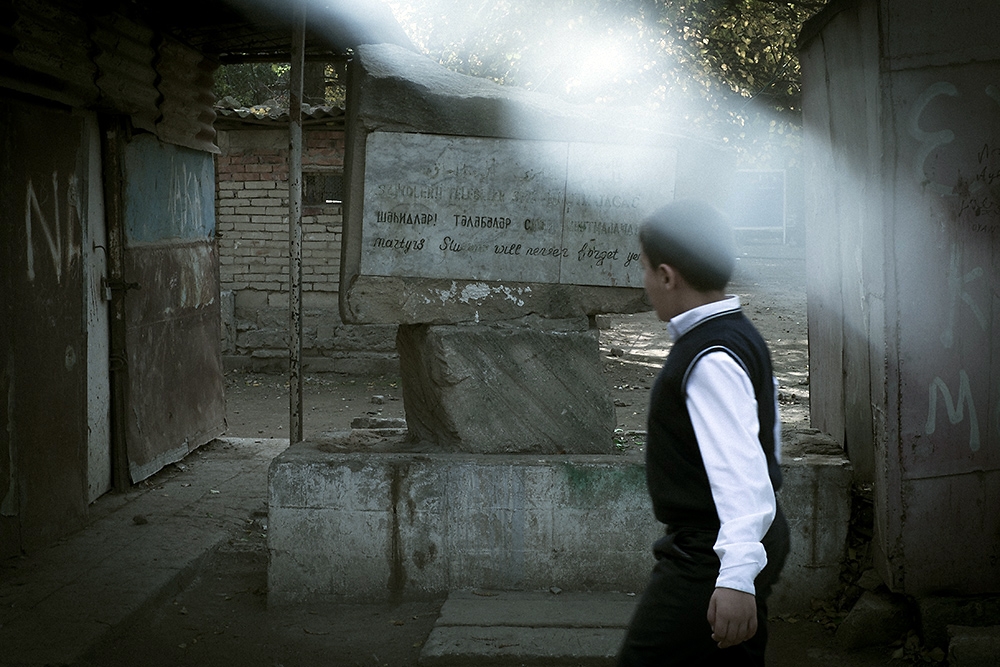 A monument erected in the courtyard of the dorms reads, “Martyred students, we will never forget you.” 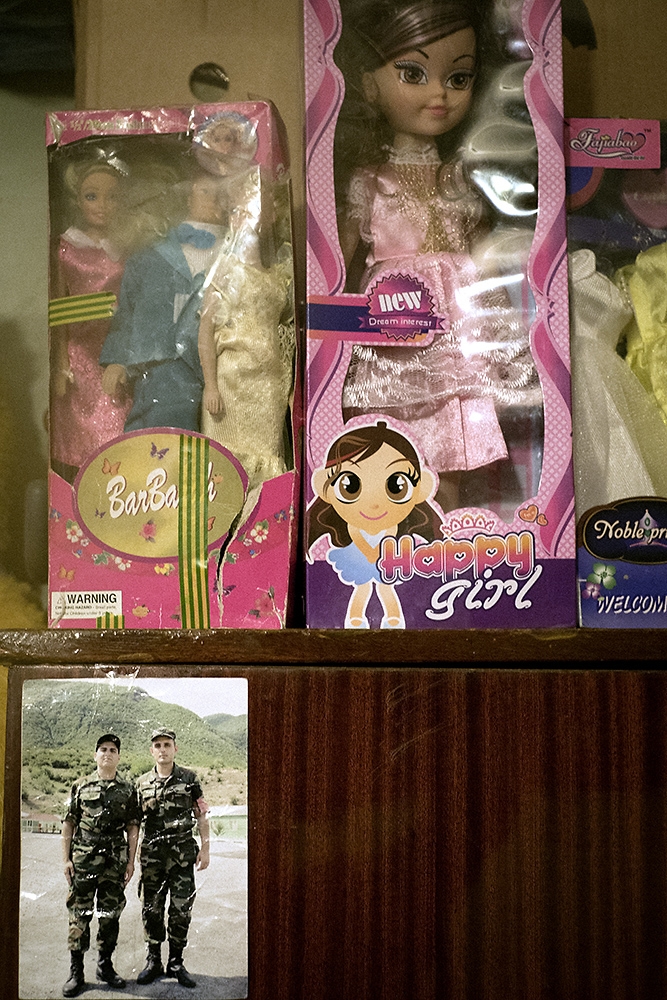 Most of the refugees in the complex fled from the fighting in Nagorno Karabakh during the early 1990s. 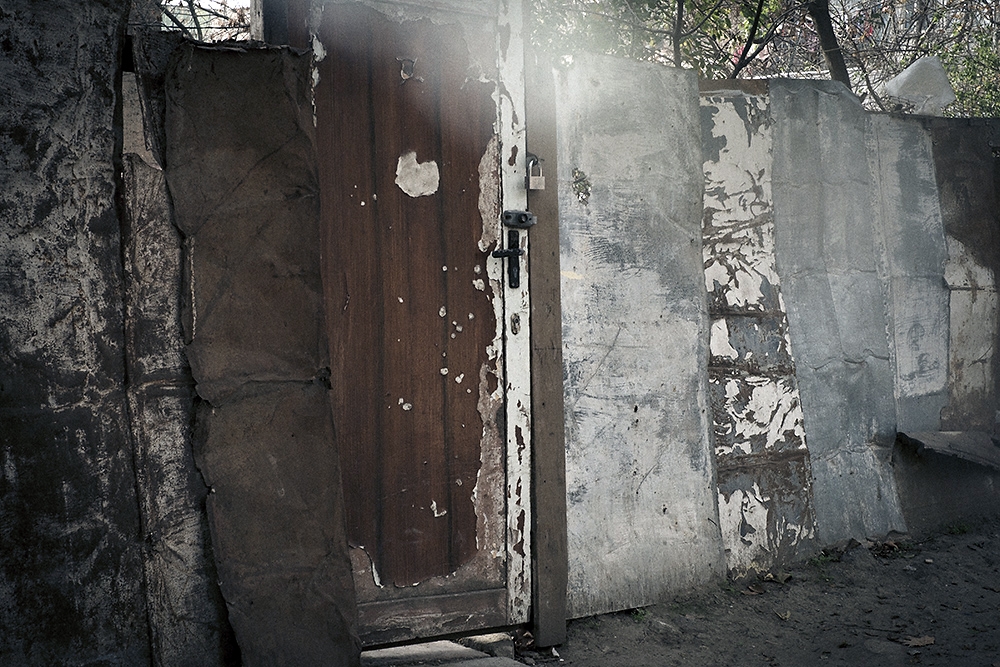 Sheets of tin and aluminum are used to fence off parts of the dorm complex. 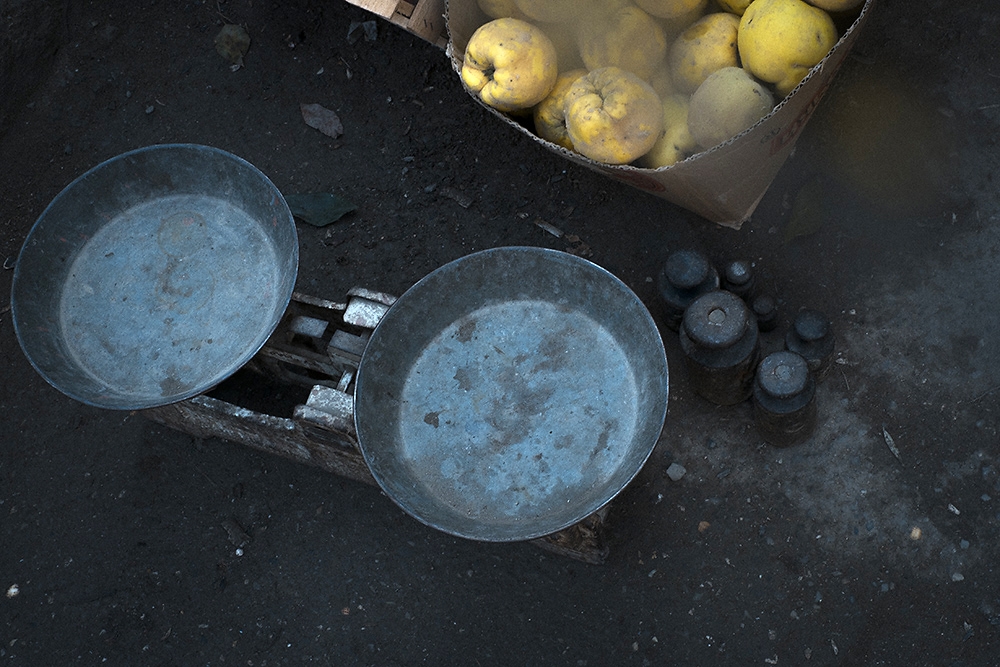 Fruits and vegetables are sold at an open-air market on the dorm complex. 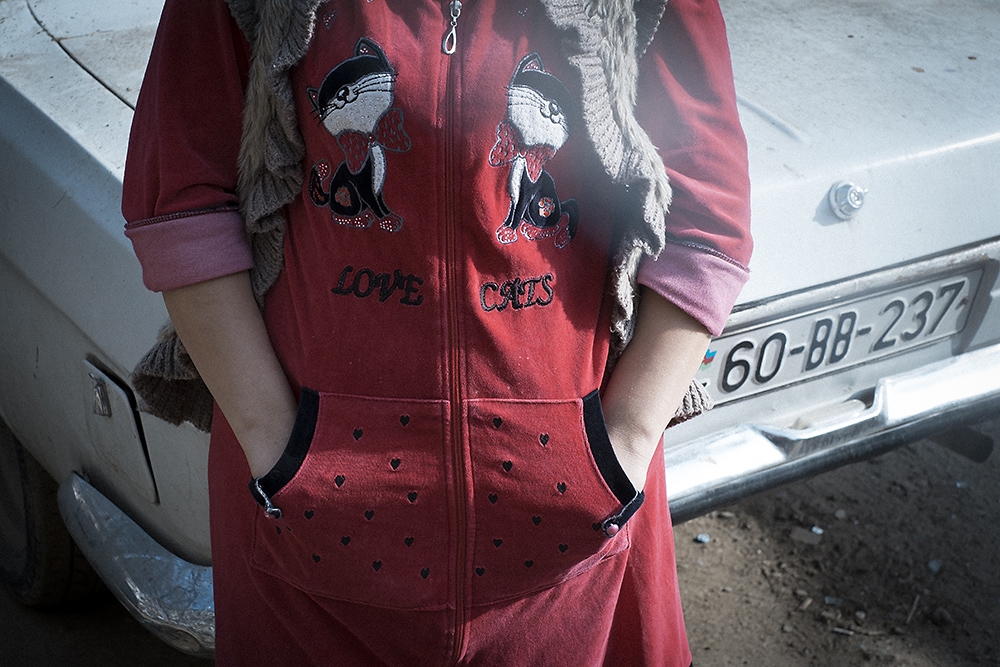 Leyla Garayeva, a nurse and refugee from the Agdam region, says she would prefer to return to Agdam than live in Baku. 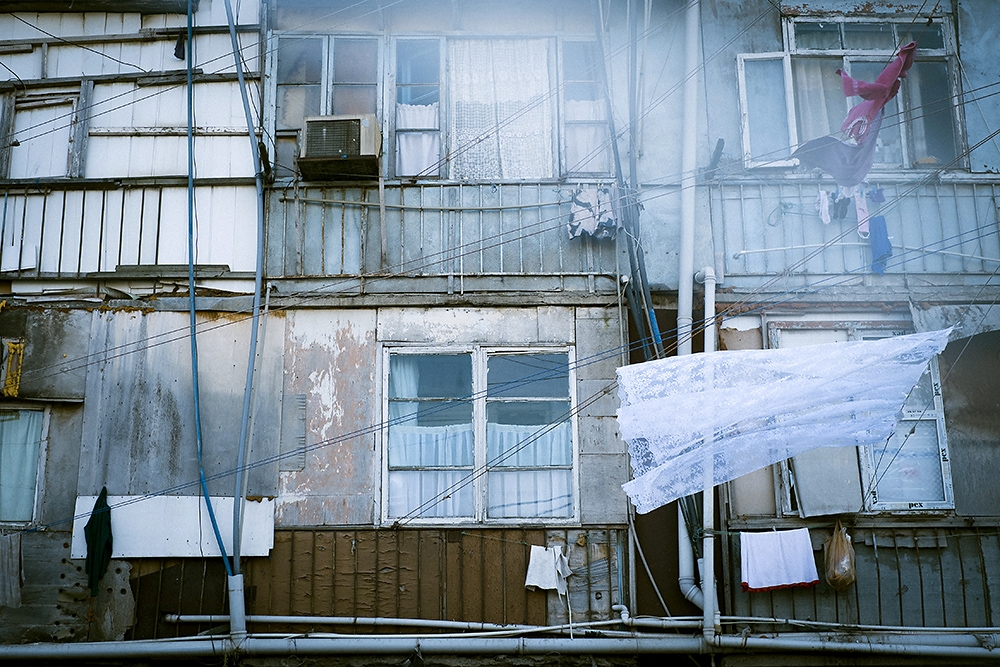 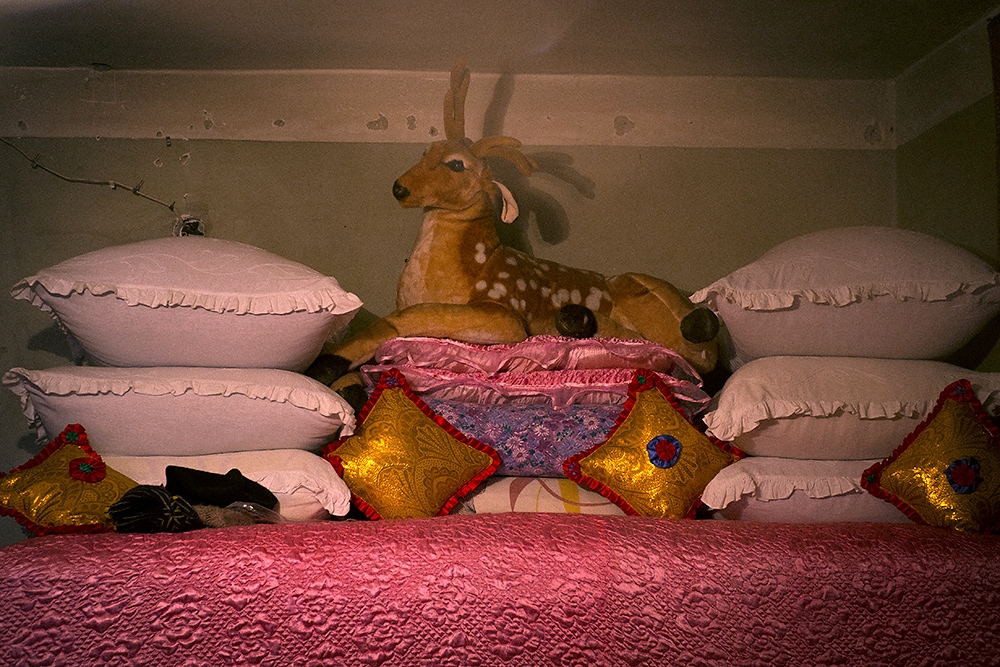 Seven people live in a one-room dorm, where bedding is stacked in a corner each morning to allow more space during the day. 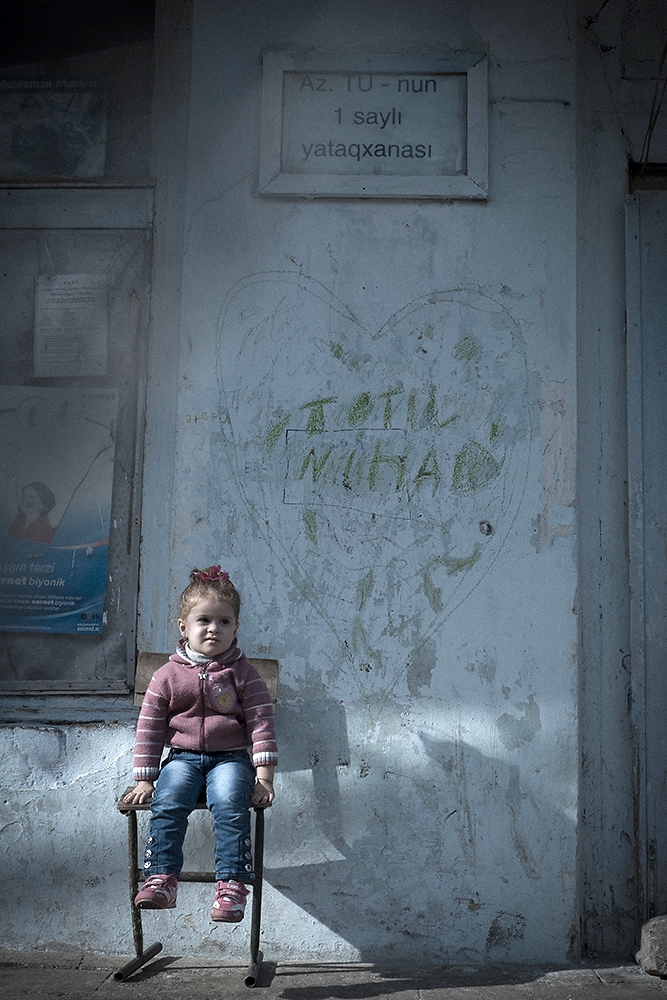 The settlement has its own secondary school and several small grocery stores. 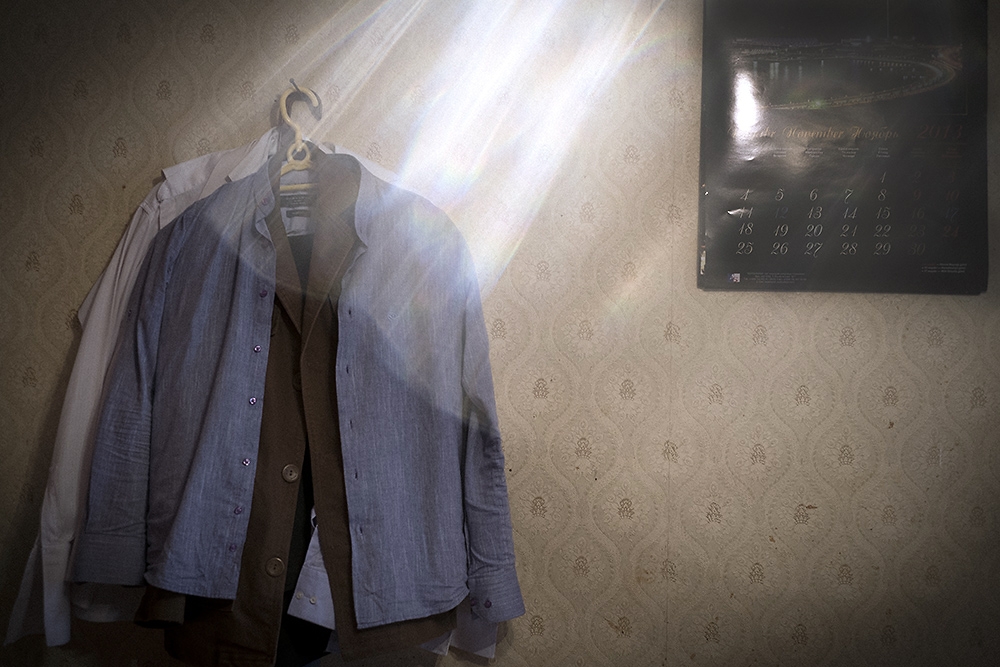 A government official says by 2015 about 90,000 IDPs currently living in dorms will be resettled into new apartment buildings. 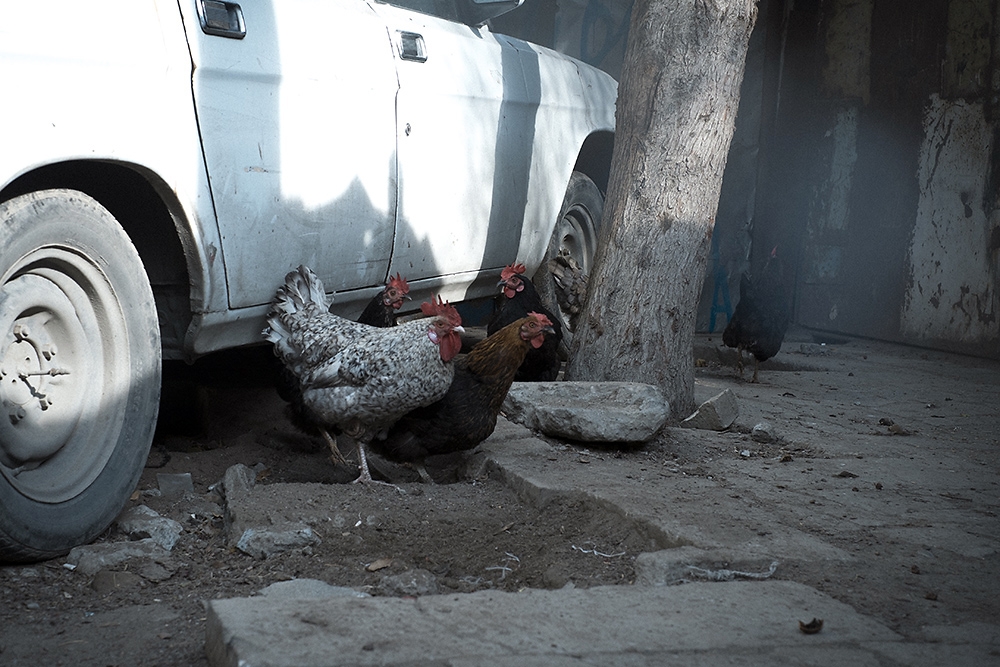 Chickens scurry under cars and peck at the barren earth on the dorm complex. 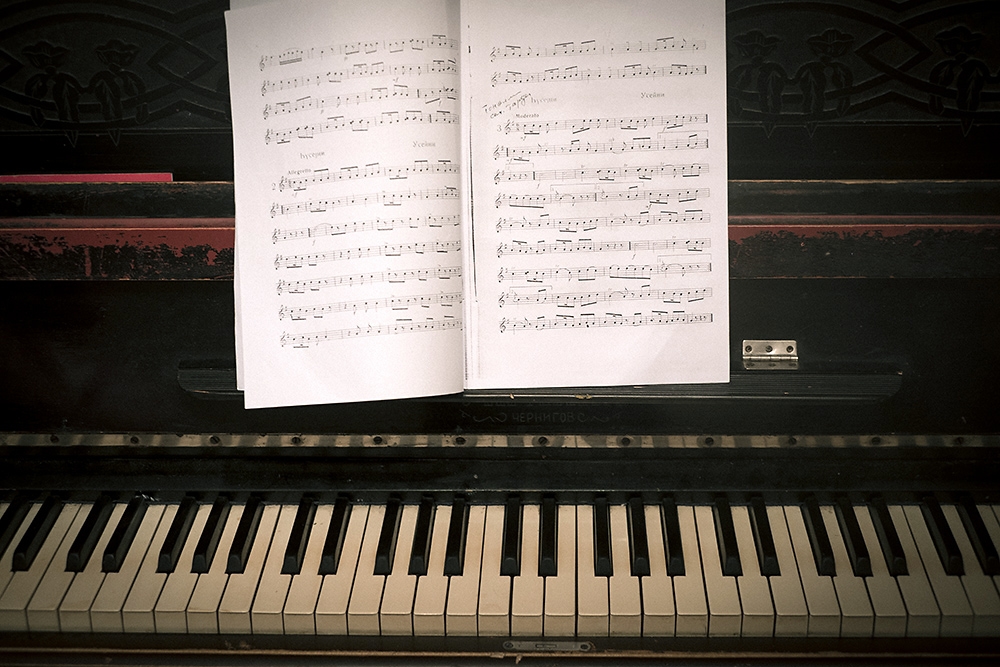 Farman Mehdiyev, a refugee who studies at a music academy, says it is difficult to practice at home in a crowded dorm.
prev
next

Nearly 20 years after a ceasefire brought a halt to all-out warfare in Nagorno-Karabakh, the Azerbaijani government is still grappling with the challenge of accommodating the country’s 600,000 Internally Displaced Persons, without encouraging them to forget their former homes.

Since coming to power in 2003, President Ilham Aliyev -- whose father, the late president Heydar Aliyev, signed the 1994 Karabakh ceasefire agreement -- has allocated hundreds of millions of manats annually from the $39-billion State Oil Fund of Azerbaijan to build housing and provide benefits to IDPs. In 2012, the Fund provided 300 million manats (about $382.45 million) for this purpose. Azerbaijani IDPs constitute one of the world’s largest IDP populations.

According to the State Committee on Refugees and IDPs, over the past decade roughly 37,000 families (more than 160,000 people) have been resettled in 79 new apartment buildings and settlements, mostly around the capital, Baku. Tent settlements no longer exist.

Both the Brussels-based International Crisis Group (ICG) and the US State Department have praised the government for its IDP-housing campaign.

Yet while the government spent about 3 percent of its overall budget on IDP-accommodation in 2012, the highest percentage in the world, according to the ICG, the new residences come with a catch. Registered IDPs cannot sell, give as a gift or transfer the apartments; they are deemed temporary shelters and the government retains sole ownership.

The government continues to stress that the IDPs eventually should return home. Some Azerbaijani observers believe this policy position encourages the state to retain ownership of IDP-occupied housing so that it can potentially evict IDPs upon the resolution of the Karabkah conflict, and coerce them to return to Karabakh, or the surrounding seven regions that are now under Armenian and separatist-Karabakhi occupation. Presently, negotiations are stalemated on a permanent political settlement of the Karabakh conflict.

Nearly half of Azerbaijan’s IDPs, according to the government, live in Baku, a city of over 2 million people. As the country’s economic hub, conditions in Baku are a far cry from the hardscrabble, rural regions that the IDPs fled over two decades ago. Children born in Baku and elsewhere after the 1988-1994 conflict, but who are still counted as IDPs, make up a large percentage of these Azerbaijanis.

“Of course, not all IDPs will be ready to return to their regions,” commented human-rights lawyer Irada Javadova, director of the Public Union for Human Rights’ Education, a Baku non-governmental organization. “But the government wants them to return.”

IDPs interviewed by EurasiaNet.org all expressed a willingness to return home. But that does not appear to be the prime objective of many. The protests that IDPs occasionally stage in Baku tend to focus on improving their existing living conditions, rather than on issues concerning their potential return to Karabakh.

Azerbaijan’s 125-member parliament contains 11 deputies registered as IDPs – all members of the ruling Yeni Azerbaijan Party’s faction. But these MPs don’t seem eager to press IDP policy issues. Like many others, they have acclimatized to their new location and role in life.

By not taking into account the fact that many IDPs have economically reoriented their lives, the government’s “blanket approach toward IDPs” is “outdated” and does not make efficient use of budgetary funds, the expert said.

“Return should not be viewed as the only viable option for IDPs,” he continued. “The IDPs, as full-fledged citizens, should be given a free choice as to what individual choices they would like to pursue.”

Officials, with their eyes on the pledge to enable ethnic Azeris to return to Karabakh and the occupied territories, do not address this criticism.

No matter what their socio-economic situation, registered IDPs remain so for life – receiving shelter, free utilities, free university tuition, lower income taxes and a monthly payment of 16 manats ($20.40). IDP women who marry men not registered as IDPs lose these benefits, however.

Despite the efforts made by the government, there still is an imbalance in the distribution of IDP benefits. Not far from expensive private houses in Baku’s central neighborhood of Yasamal, stand the decrepit former dormitories of Azerbaijan State Technical University. It’s a complex that houses 1,000 IDP families. With broken windows, peeling plaster and pungent odors from a malfunctioning sewage system, the 10 five-story buildings, first converted for IDP use in 1993, appear more like a set from a war movie than actual residences.

“We all are already crazy people. Everybody has neurosis from the conditions we are living in,” said Maryam Huseynova, a retired schoolteacher from the Fizuli region who lives with her 10-member family in two small rooms. The building has one bathroom and toilet on each floor. Their situation, though, used to be worse; the government and “some Norwegians” helped improve electricity and water supplies a few years ago, said Huseynova.

Those still living in the dormitory cannot afford to move out. Huseynova’s neighbors, the Aliyevs, and their three children, live in one room, and survive on 54 manats ($68.84) per month, including government benefits, along with money earned by the father from doing odd jobs.

By the end of 2015, the government plans to move some 90,000 people out of such dormitories and into a settlement being built on 380 hectares of land in the Baku suburb of Gobu, according to the State Committee on Refugees and IDPs. Another 500 hectares will accommodate 110,000 IDPs currently living in military bases, schools, kindergartens, sanatoriums, and summer camps.

The Yasamal dormitory residents expect to be resettled by early 2015 into one of these settlements, which feature buildings with one to four-bedroom apartments and all utilities. Whether or not the plan considers them as individuals with the right to choose for themselves, Mariam Huseynova and her neighbors are ready to move. “We have spent 20 years here already,” Huseynova said. “It is enough.”