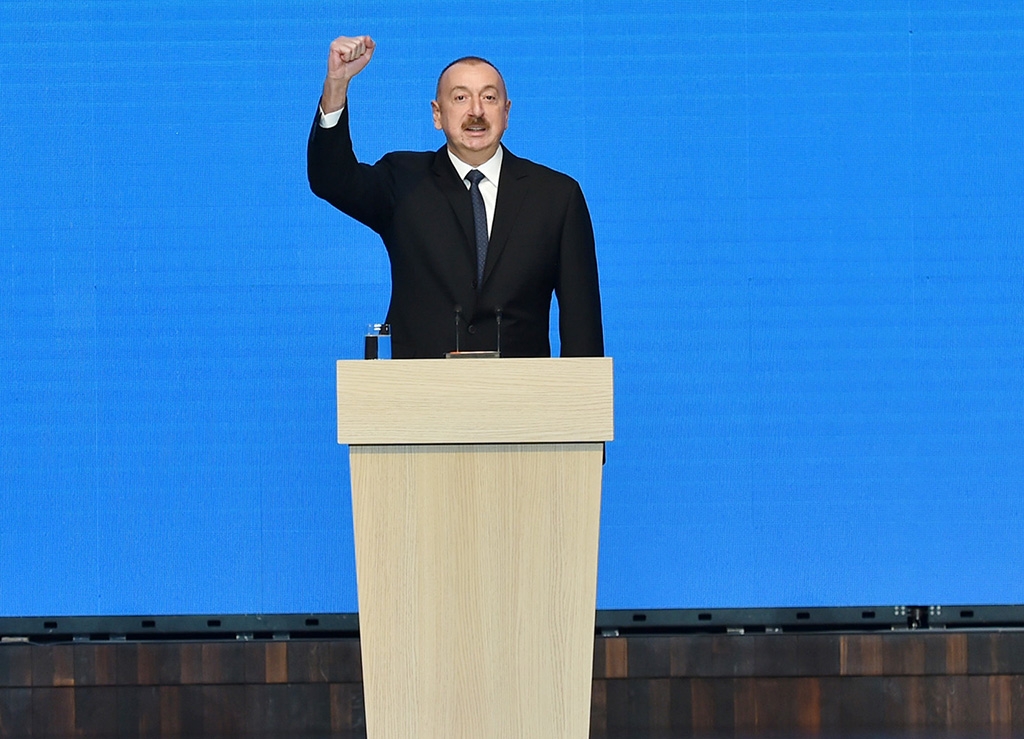 In August, Armenian Prime Minister Nikol Pashinyan gave a speech in Stepanakert, de facto capital of Nagorno-Karabakh, in which he made a now-infamous pronouncement: “Karabakh is Armenia – period.”

The categorical statement caused a stir as it went beyond what previous Armenian leaders had said about the territory, which remains – in theory – the subject of negotiations between Armenians and Azerbaijanis.

Azerbaijan’s obsequious press has covered Aliyev’s quip as if it was the next coming of Winston Churchill. “Azerbaijani President’s speech will remain in the history of Valdai Club,” claimed news site ona.az. The news agency Trend reported that Pashinyan’s “provocative and insane statement … was blown to smithereens” by Aliyev’s devastating rebuttal. Even the independent news agency Turan seemed carried away, noting that while Aliyev was speaking “it is clearly visible how intensely Vladimir Putin listens to him.”

The Defense Ministry reported that Aliyev’s statement “was perceived with a high spirit in the Azerbaijan Army.” Azerbaijan’s Ministry of Youth and Sports announced that they would be launching an “International Youth Campaign” inspired by Aliyev’s statement, including the hashtag #KarabakhIsAzerbaijan.

(Incidentally, the Azerbaijani government’s love of the exclamation point is a newfound one: N!DA, once one of Azerbaijan’s most prominent opposition youth groups, has been systematically oppressed over the last few years and now exists only online; “nida” translates as “exclamation point.”)

Lack of creativity aside, Aliyev does seem to be capitalizing on the rashness of Pashinyan’s August proclamation, the consequences of which continue to reverberate. Most recently, Russian Foreign Minister Sergey Lavrov, also speaking at Valdai, a day before Aliyev, pointedly criticized Pashinyan: “The sides are making statements, quite serious ones, statements are heard that Karabakh is Armenia. It's the same as if the PM of Albania said from Tirana that 'Kosovo is Albania.' This, of course, doesn't help create an atmosphere for renewing the political process."

Pashinyan himself seems to have been trying to walk back the statement. At a press conference in September, he was asked about the international blowback, and he argued that when he made the declaration he was speaking in theoretical terms: “If their principle is so maximalist and doesn’t acknowledge any kind of compromise whatsoever, then our own principle should be ‘Artsakh is Armenia, period.’” (Artsakh is the Armenian word for Karabakh.)

And following Lavrov’s criticism, the Armenian Foreign Ministry gave it another spin, saying that Azerbaijan’s aggressive rhetoric poses an existential threat. “Effectively countering this threat is an all-Armenian issue, which was best formulated through the commitment undertaken by the authorities of Armenia before the people of Artsakh, on August 5, in Stepanakert,” ministry spokesperson Anna Naghdalyan told an October 4 press conference, referring to Pashinyan’s speech.

Neither explanation is convincing, given that Pashinyan also was leading the Stepanakert crowd in chants of “miatsum,” or “unification,” the nationalist slogan that gained popularity in the 1980s and 90s as Armenians fought for Karabakh to break away from Azerbaijan.

From a legal standpoint, Aliyev is correct; Karabakh is internationally recognized as part of Azerbaijan. But the categorical way in which he said so seems to admit no potential for any other possibility, even though the current negotiating framework between the two sides calls for the territory’s final status to be the subject of negotiations. Azerbaijan regularly claims that there is no possible solution to the conflict that doesn’t take into account its territorial integrity, so in that context it seems like Aliyev is not only using the present tense, but future as well.

So whatever temporary moral high ground Baku gained as a result of Pashinyan’s impolitic rhetoric, it – as it so often does – happily and quickly gave it up.

Beyond the war of words between Aliyev and Pashinyan, the war on the ground has been slowly heating up as well. After a long period of relatively little violence on the front lines, there has again been an uptick of deaths on both sides.

Following a September meeting between the two foreign ministers on the sidelines of the UN General Assembly, the international mediators brokering the ongoing negotiations issued a fairly gloomy statement, calling for “additional measures to reduce tensions and sustain an atmosphere conducive to peace and favorable to substantive talks” and “encourag[ing] the sides to minimize the use of rhetoric that is inflammatory or prejudges the outcome of negotiations.”

The hopes engendered by a revival of peace talks earlier this year and a mutual promise to “prepare the populations for peace” are quickly receding.