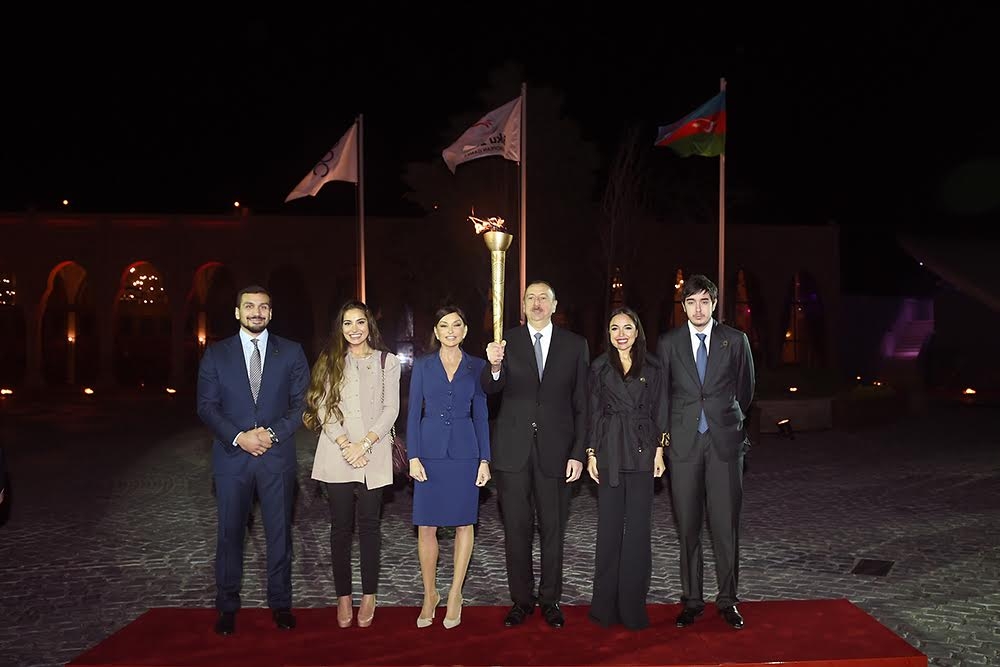 That corporate sponsorship and international sporting events go hand-in-hand is nothing new. But the extent to which many sponsors of the June 12-28 European Games have connections to the host nation, Azerbaijan, and specifically to friends and relatives of President Ilham Aliyev, is noteworthy.

Aliyev – who in addition to serving as head of state also happens to lead Azerbaijan’s National Olympic Committee – and his family members have played a prominent role in every aspect of hosting the games.

First Lady Mehriban Aliyeva ran the organizing committee. In addition, all members of Aliyev’s family, including twenty-something daughters Leyla and Arzu, and teenage son, Heydar, participated in the torch relay for the Games.

But the first family’s involvement apparently does not stop there. Nine Azerbaijani companies that are officially promoting the Games as official partners or official “supporters” all appear to have some sort of connection, whether commercial or personal, to the First Family, recent media investigations have found.

Two other sponsors, SOCAR and Azercosmos, are state-owned, and thus are closely connected to the Aliyev administration. SOCAR, the state oil giant, oversaw the estimated $640-million construction of a 68,000-seat stadium in the capital, Baku. Meanwhile, Azercosmos, which is providing satellite support for the event, has been touted publically as evidence that there is “a better future with Ilham.”

Among the international partners is British energy giant BP, a company with a long-standing connection to Azerbaijan, and to the Aliyev family. It was Ilham’s father, the late Heydar Aliyev, who, while serving as the country’s president in 1994, engineered the so-called “Contract of the Century,” under which a BP-led consortium gained rights to develop and export Azerbaijani energy. Since then, Azerbaijan has reaped billions in energy earnings, putting the country in position to play host to such events as the European Games.

EurasiaNet.org contacted the European Games to learn how official partners and supporters were selected for the Games, but was told that “it is not our policy to release commercially sensitive information.” Rates for sponsorship also were not provided, for the same reason.

An explanation of the difference between partners and supporters was not given, though a representative of the Games’ commercial department emailed that the two roles “provide brands with the ability to establish a partnership, and secure a range of marketing and commercial assets, that best suit their commercial objectives.”

The following is a list of companies that have had or continue to have a connection to the president and his family:

Azerbaijan Airlines, billed as the country’s “national airline,” is promoting the Games in its in-flight entertainment and, this year, is offering steep discounts on its flights for non-Azerbaijanis “accredited” with the European Games. Officially, it has been a closed joint-stock company since 2008, but its precise ownership structure remains unclear.

In 2010, an investigation by Radio Free Europe/Radio Liberty’s Azeri-language service revealed that “nearly all” of the companies held by Azerbaijan Airlines before its 2003 privatization had been acquired by a conglomerate called SW Holding. Azerbaijan Airlines has awarded multiple contracts for meals, taxiing, technical upkeep and airport construction to companies owned by SW Holding, now known as Silk Way Group. The Group also owns a bank, Silk Way Bank, which had belonged to the airline.

The RFE/RL investigation found through official company records that one of Silkway Bank’s controlling partners was then 22-year-old Arzu Aliyeva, the younger daughter of President Ilham Aliyev. Another partner was Zarifa Hamzayeva, wife of Azerbaijan Airlines President Jahangir Askerov.

A presidential spokesperson confirmed to RFE/RL Arzu Aliyeva’s participation in the bank’s ownership, adding that that it was her right as a private citizen to be involved in such legitimate business activities.

Touting itself as Azerbaijan’s largest bank chain, Kapital Bank, describes its mission as enhancing “the socio-economic welfare of our country through transparent financial partnership.” It its 2014 annual report, the bank states that, as of December 31, 2014, it “is ultimately owned by Mrs. Leyla Aliyeva and Mrs. Arzu Aliyeva, who exercise joint control over the Bank.” Leyla Aliyeva and Arzu Aliyeva are the two daughters of President Ilham Aliyev and First Lady Mehriban Aliyeva.

The Aliyeva daughters also have “ultimate control” or substantial stakes in several other private Azerbaijani banks, according to a June 11 report by the Organized Crime and Corruption Reporting Project.

Nar is the mobile-phone branch of the Baku-based telecommunications company Azerfon. An investigation conducted by RFE/RL in 2011 uncovered evidence that Azerfon is connected to the ruling family.

The two young women also reportedly held management positions in the other two Panamanian-registered stakeholders of Azerfon: Leyla Aliyeva was listed as the president of Gladwin Management, Inc. and Grinnell Management, Inc.; her sister was registered as the treasurer of both entities.

The remaining 28 percent of Azerfon is owned by the state-run company Aztelecom (10 percent) and the private Cellex Communications SA (18 percent), registered in the offshore tax haven of Nevis Island.

The presidential administration has refused to comment on the Aliyev daughters’ reported involvement in Azerfon.

SOCAR has served as Azerbaijan’s profit machine. Whenever the administration’s interests have required muscular, moneyed support – whether for PR and lobbying in Washington and Brussels, or in controlling schools at home – SOCAR has been ready to help.

For the European Games, SOCAR oversaw construction of the 68,195-seat Baku Olympic Stadium, handing the $640.5-million project over to an Istanbul-based contractor for SOCAR, Tekfen Construction.

In a recent interview with Euractiv.com, SOCAR Deputy Vice President Vitaly Baylarbayov said the company became an official partner of the Games “for very many reasons.”
SOCAR “actively” takes part in the Azerbaijan Football Federations Association, run by SOCAR President Rovnag Abdullayev. And some of its other top executives “are not only sports fans, but sports activists and managers,” Baylarbayov added.

The company contributed over 132 million manats ($125.88 million) to the state budget in May.

Azersun Holding claims to be Azerbaijan’s top food producer and exporter, and critics contend that it acts like a monopolist. Its connection to the Aliyev family is indirect. Azerbaijani businessman Hasan Gozal, brother of Azersun’s founder and board chair, Abdolbari, serves as a member of the board of Azersun Holding. A 2013 investigation published by the International Consortium of Investigative Journalists (ICIJ) found that Hassan Gozel also acts as the director of three British Virgin Islands companies (Arbor Investments, LaBelleza Holdings Limited and Harvard Management Limited) owned by the Aliyeva sisters. The companies’ purpose is not clear.

Not only is Azersun involved in food processing, farming, trade, and packaging and paper, but, also, as of 2013, it was involved in construction projects worth an estimated $4.5 billion, according to the ICIJ investigation. The projects ranged from Baku’s emblematic Flame Towers to government villas and a $2-billion, 300-hectare development project (Dream Island) just outside of the capital city.

Azersun’s role at the European Games is relatively modest: it is serving as the event’s “official tea supplier,” Azernews reported.

Bazarstore is the retail supermarket arm of Azersun Holding. The supermarket chain, which sells its own trade brands, operates 10 facilities in the greater Baku area and four in the regional towns of Ganja, Sheki, Barda and Zagatala. It will sell merchandise for the Games.

A document widely circulated on Facebook, featuring letterheads from Baku2015 and FiveCurrents, an American production company staging the Games’ opening and closing ceremonies, encourages foreign visitors to frequent Bazarstore rather than “local smaller supermarkets with limited selections and higher prices.” The European Games directed EurasiaNet.org to FiveCurrents for comments. The company did not respond in time for publication.

Dairy company Milla is a brand owned by AZFP, the Azerbaijan Food and Packaging Company. According to a 2014 investigation by the Turan news agency, AZFP had a connection to Gilan Holding, a vast conglomerate believed to belong to Emergency Situations Minister Kamaladdin Heydarov, one of Azerbaijan’s most powerful public figures and a close friend of the First Family.

Heydarov did not comment on any possible connection to Gilan Holding, according to Turan.

In 2013, President Aliyev attended the opening of Milla in Hokmeli, a suburb of Baku. The company has been named as “the official dairy supplier” for the Games, according to one industry publication. The Baku2015.com site says the company will feature the Games’ “logo on all of their products and staff uniforms.”

NAZ is a five-year-old, small-volume passenger-car manufacturer, producing up to 5,000 vehicles per year. Headquartered in the autonomous Azerbaijani exclave of Nakhchivan, the company’s ownership structure is unclear. The presidential family has no discernible links, direct or indirect, to the company, but Nakhchivan, a roughly 5,503-square-kilometer territory squeezed between Armenia, Iran and Turkey, is the Aliyev family’s ancestral homeland. Nakhchivan officials have denied that any member of the local government has a financial stake in NAZ.