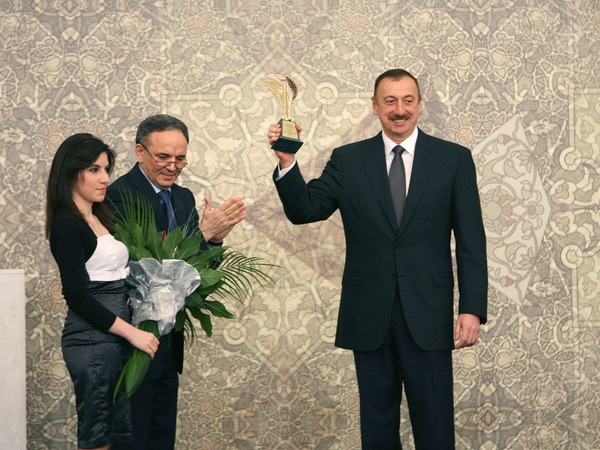 To many in Azerbaijan, winning Europe's ultimate pop-music contest produced a surge of national pride. But as the cheering over the Eurovision victory subsides, a tricky debate is just starting to unfold: what image of itself should Azerbaijan project to the outside world next year?

Thanks to the winning duet sung by the Azerbaijani tandem of Nigar "Nikki" Jamal and Eldar "Ell" Gasimov, Baku gets to host the contest in 2012. Few question that the energy-rich country has the monetary muscle or the organizational ability to pull out all the stops for next year’s Eurovision competition, scheduled to take place in Baku from May 22-26.

For now, government officials, while acknowledging the “political importance” of the win, are doing their best to take Eurovision in stride. Ali Hasanov, the influential head of the presidential administration’s political department, told 1news.az that the “[t]he victory was not unexpected.” He went on to assert that government policy played a role in the success story. “It is the result of the attention that the government and the Heydar Aliyev Foundation [headed by First Lady Mehriban Aliyeva] pay to the development of youth and culture,” Hasanov declared.

Hasanov’s confident comments reflect a mood in government circles that Baku is now ready to bask in the spotlight of international attention. Over the past few years, officials have used part of the country’s energy wealth to beautify Baku, upgrading roads and expanding the city’s conference & tourism infrastructure. Based on official data, the city has 114 hotels that can accommodate 10,000 people. Five luxury hotels – operated by Hilton, Four Seasons, JW Marriot, Fairmont and Rixos -- with several hundred rooms are scheduled to open by 2012.

While that number may appear low for a Eurovision contest – ticket sales for this year’s Düsseldorf show reportedly numbered in the tens of thousands – economist Zohrab Ismayil, head of the Assistance for a Free Economy think-tank asserts that “one year is enough time to fix the remaining problems.”

Ask Azerbaijanis on the streets of the capital, and many say they are looking for more out of the 2012 pop festival than a building boom.
Some hope it will stimulate democratization. An ongoing crackdown on free speech, featuring the arrests of bloggers, Facebook users and youth activists critical of President Ilham Aliyev’s administration, does not jive with the hipster image of a Eurovision host, reform-minded Azerbaijanis say.

The international community appears also to have democratization in mind. In a May 16 statement, Roland Kobia, head of the European Union delegation to Azerbaijan, called the 2012 event “a golden opportunity for Azerbaijan to show to the world the resolute and sweeping modernization of its society.”

Natig Jafarly, co-founder of the REAL opposition group, sounded a note of caution to those hoping for change. “It is naïve to expect serious political reforms” to arise out of the Eurovision contest, she said. At the same time, she expected “the government will undertake some steps to keep its image high.”

From now on, the government will have to think twice before employing heavy-handed tactics against opponents, Jafarly added. “[A]ny problems like a violent crackdown on opposition unauthorized rallies, or the arrests of opposition activists, will be covered [by foreign media] in the context of ‘Does this country deserve Eurovision?’” Jafarly noted.

Political analyst Elkhan Shahinoglu echoed that assessment while noting that “the government faced a lot of international criticism before, [in the case of the 2009 imprisonment of video bloggers Adnan Hajizade and Emin Milli] but did not care.”

So far, officials have provided no hint on whether the Eurovision win will alter their approach on democratization. But they have emphasized that they will welcome Eurovision guests next year with open arms.

That pledge could prove particularly sensitive where Armenian tourists and contest participants are concerned. Armenian passport-holders -- or even individuals with Armenian last names – are only rarely granted entrance into Azerbaijan. Armenia and Azerbaijan have been locked in a struggle over the Nagorno-Karabakh enclave for more than two decades.

The open-arms policy may also require some tweaking of entry procedures at Baku airport. Last year, Baku ditched its in-airport visa service, and required travelers to apply for visas at their local embassy – a time-consuming procedure that sparked frequent complaints.

A presidential administration source, who asked not to be named, told EurasiaNet.org that while it is too early to talk about simplifying Azerbaijan’s visa procedures, one possible option does exist. “Maybe we will use Moscow’s example from two years ago when a ticket to the [Eurovision] show was enough to enter the country,” the source said. “No one who wants to come [to Azerbaijan] will face problems.”

Shahin Abbasov is a freelance journalist based in Baku and a board member of the Open Society Assistance Foundation-Azerbaijan.