Water supply has been a problem for years, but the issue has become so acute in recent months that it has begun to receive high-level attention. 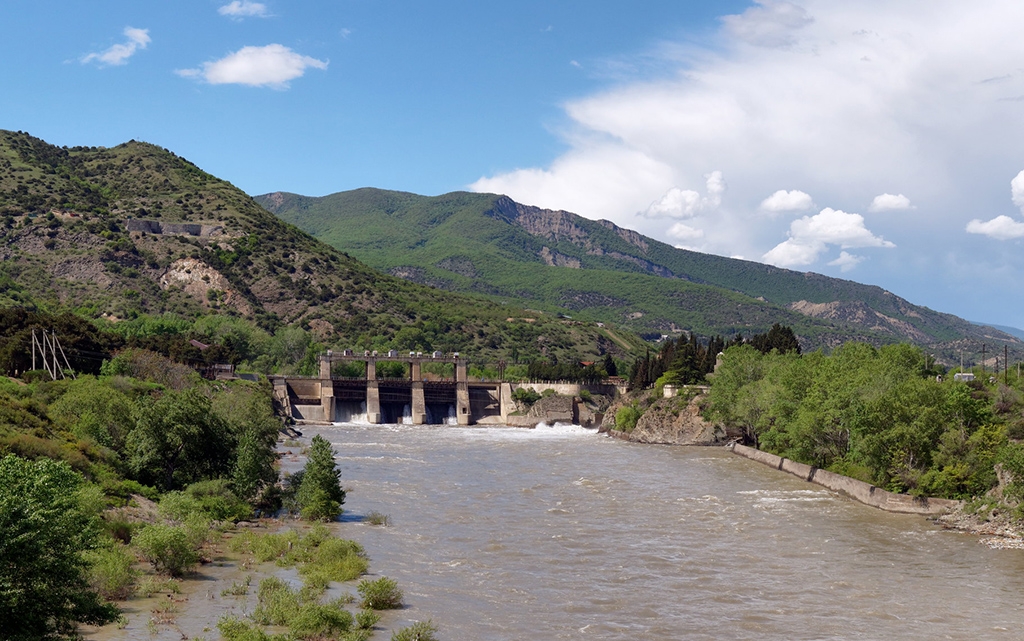 The Kura River in Georgia, before it flows into Azerbaijan (photo: Alexxx Malev/Flickr/CC)

Water shortages in Azerbaijan, which have vexed the country for years, have recently become exacerbated, forcing the government to promise action.

For several years “we only have had water for two or three hours a night,” said one resident of Baku’s Ramana district, speaking to Eurasianet on condition of anonymity, like all sources in this story. “We have complained to the relevant agencies several times, sent a letter to the presidential administration, called the hotline” (of the state water service company, Azersu).

In the village of Fatmayi in the Absheron region, residents started experiencing severe water problems about three years ago. “The flow of water is very slow,” one resident said. “Once or twice a week it stops altogether, for up to three hours.”

The sources of Azerbaijan’s water problems are manifold.

The country’s main water source, the Kura River, which flows from Turkey through Georgia and Azerbaijan to the Caspian Sea, has been shrinking in part due to excessive agriculture and some experts believe that it may soon peter out before reaching the sea. The second-largest river, the Araxes, flows along the border with Iran and its volume has been shrinking as well, exacerbated by a large number of reservoirs taking out water. Add to that recent droughts, pollution and chronic mismanagement, and the situation has become so dire that the government has in recent weeks begun to put it at the top of the country’s agenda.

Azerbaijan’s state-owned TV channel AZTV carried a segment in June reporting that the Kura’s level had dropped two-and-a-half meters in some places in recent months, causing water from the Caspian Sea to flow back into the river rather than – as usual – the other way around. The level of the Mingachevir reservoir, which is fed by the Kura, had dropped by 16 meters during the same period, the piece reported.

President Ilham Aliyev for the first time acknowledged the crisis in a July 23 government meeting, saying that drought, wasteful practices in agriculture, and in some cases the “indifferent attitude of relevant bodies” had contributed to the country’s water problems. Aliyev also said that water-intensive cotton farming, which the government has promoted in recent years, is suffering because of the shortages. He receives letters from “over 10 districts every day,” mostly from farmers and business people, about their water problems, he said.

“From now on, drinking water and irrigation projects will be on our agenda as the most important issues. The main goal of today's meeting is to eliminate the mistakes and existing shortcomings in this area in the coming years,” Aliyev said.

In the village of Qaraxanli, near the border with Armenia, the water channel that was once fed from the Kura has been dry for more than 10 years. The government drilled wells and set up pumps in the village in 2017 and 2018, but water only flows two hours a day, a resident told Eurasianet. Farmers in the area have to buy water to be shipped in tanks to irrigate their crops. “Sometimes you need to wait for a long time for your turn to buy water as there are many people waiting,” one resident told Eurasianet.

While the president did not touch on the international angle of the problem, other Azerbaijani officials have blamed several of its neighbors for the water shortages.

“Pollution of our main water resources – the Araxes and Kura rivers – by neighboring countries also aggravates the situation,” said Sadiq Qurbanov, the chair of the Azerbaijani parliament’s Committee for Natural Resources, Energy and Environment, during a July 3 meeting. “Azerbaijan has joined 17 conventions on water but unfortunately, neighboring countries Armenia and Georgia have not joined those conventions.”

Georgia and Azerbaijan have discussed a bilateral agreement on management of the Kura, but have yet to sign a deal. With Armenia, meanwhile, Azerbaijan remains locked in conflict over the territory of Nagorno-Karabakh. Azerbaijan’s 560-million-cubic-meter Sarsang Reservoir is controlled by Armenian forces following a war in the 1990s. A 2016 report from the Parliamentary Assembly of the Council of Europe said that the Armenian authorities were “deliberately depriving” Azerbaijanis of the water as a “political tool.”

In June, Iran agreed to increase the volume of water in the Araxes reservoir, which is jointly managed by the two countries, after Azerbaijan complained that the water level of the Araxes River had fallen, threatening water supplies to nearby areas.

Baku has recently announced a number of measures aimed at ameliorating the water shortages, including an "Action Plan for 2020-2022 on ensuring efficient use of water resources" approved in July.

An analysis of the proposed measures by the independent news agency Turan, however, expressed skepticism that the plan will do much to solve Azerbaijan’s water problems. “[A]lthough experts have long warned the government in mass media about the misuse of existing water resources, the government had to discuss the issue only this year, when the situation reached a critical point,” it wrote.

It cited government statistics to argue that the measures Aliyev cited as past successes have made only a small dent in the problem so far.

“If about a tenth of the work to be done has been done in 15 years, how many 15-year [periods] are needed to eliminate the water shortage in the country? While hundreds of millions of manats of state funds have been allocated to this area over the past 15 years, the existing problems have not yet been resolved.”