Azerbaijan: ‘Family Is the First Fear’ of LGBT Community 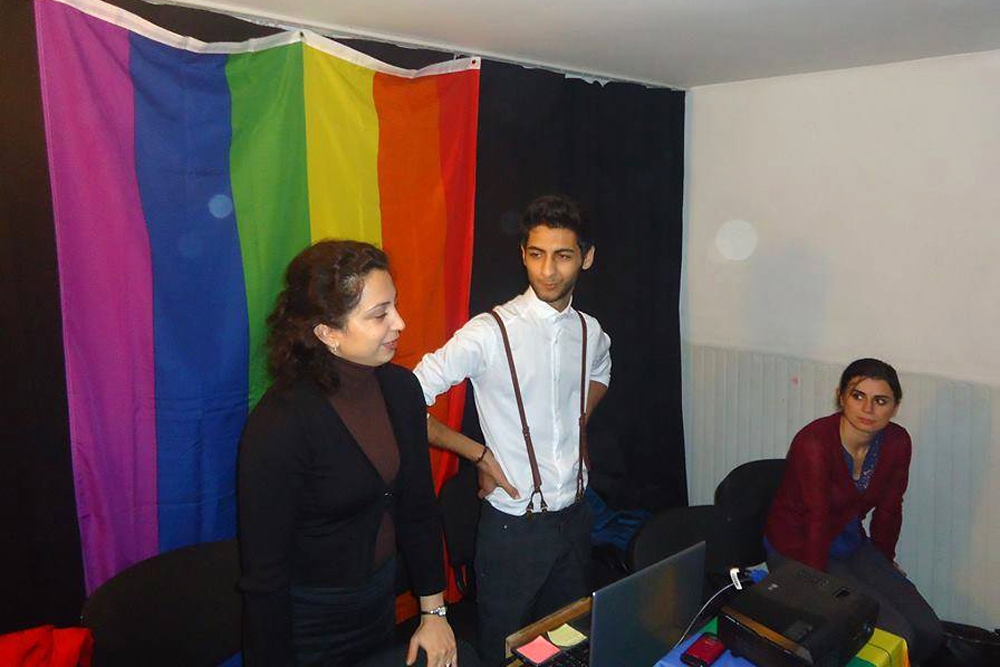 The 19-year-old Azerbaijani man claims he awoke one morning in mid-August to the sound and feel of gasoline splashing on his body and his mother angrily screaming. Through a sleepy haze, he saw her burning a piece of paper. Suddenly, he alleged, his mother’s intentions became clear; he was about to be burned to death for being homosexual.

The story, recounted to EurasiaNet.org by the man, who calls himself Malik to protect his identity, forms part of a disturbing pattern of abuse and mistreatment of LGBT individuals in this Caspian-Sea country. For now, the government doesn’t appear interested in trying to address the issue -- even though the country currently chairs the Committee of Ministers of Europe’s foremost human-rights body, the Council of Europe.

Unlike in many Muslim societies, Azerbaijani law does not prohibit homosexuality, bisexuality or transgenderism. However, the level of disapproval that exists in this tightly knit society is high, and that places a heavy burden on LGBT Azerbaijanis, some say.

In Malik’s case, he claims his sister prevented his mother from setting him aflame. He alleges, though, that his mother scratched him to the point of drawing blood. Still in shock and physical pain from the experience, Malik says he lives now at a friend’s place. He claims his mother knew of his homosexuality, though “never admitted that.”

“When she got news about me attending an LGBT seminar in Baku, which was a public event, she realized it is impossible to deny the fact that I am homosexual,” he said. “That was unbearable for her.”

In Azerbaijan’s family-centric culture, disapproval from relatives can often hit hardest. “Family is the first fear of LGBT people,” according to Javid Atilla Nebiyev, director of Nefes LGBT, one of a handful of non-governmental organizations in Baku focusing on LGBT issues. “That is the first, small community where LGBT people experience trouble.”

Fifty-five-year-old Babi Badalov, an openly gay artist, left Azerbaijan for the United Kingdom eight years ago after his brother threatened to kill him for being homosexual. He blames such attitudes on the country’s 71-year Soviet history, when LGBT issues were never addressed.

“It was taboo,” said Badalov, who now lives in France. “People did not even know that there were non-traditional sexual orientations and genders.”

While now Azerbaijanis “have the freedom to know,” he continued, the Soviet past continues to influence present opinions. “Except for some tolerant circles in the capital, Baku, [a non-heterosexual identity] is seen as something extremely abnormal, extremely disgusting.”

Consequently, “for his own safety,” a gay man “constantly” has to think about “what to wear so that he does not look different,” or otherwise attract attention, he claimed. Many Azerbaijanis often presume that men who wear an earring or unusually colorful clothing are homosexual.

Defying such notions, Badalov said he opted for an earring.

One 22-year-old trans-sexual Azerbaijani can identify with those difficulties. Although born a woman, Leyla, who asked to be identified only by her first name, dresses in men’s clothes and considers herself male. She claims that her family sometimes hides her clothing, keeps her locked indoors and threatens her with death if she does not dress “like a woman.”

A recent university graduate with a degree in education, Leyla says that she nonetheless dresses as a man when she applies for teaching positions. She did not detail how she distinguishes between male and female clothing.

“At job interviews, they expect me to show up as a woman, but instead they see a woman dressed like a man,” she claimed. “I do not know what to answer when they ask why I dress like a man. I am turned down [for jobs] mostly because of that appearance.”

Azerbaijani legislation contains no protections against workplace discrimination based on sexual orientation, noted activist Nebiyev. He alleged that, as a result, some LGBT Azerbaijanis turn to jobs as  “sex workers to earn their living.”

The topic generally is not one for any form of public discussion, including by imams. Allegations of homosexuality, however, have been used as part of smear-campaigns against opposition leaders.

Media and human-rights activists have paid relatively little attention to these problems. The Azerbaijani Commissioner for Human Rights’ Office could not be reached for comment on LGBT abuse.

For many, the January 22 suicide of 20-year-old Isa Shahmarli, the head of the LGBT group Azad, illustrated the dangers involved in looking the other way. In a Facebook message before his death, Shahmarli blamed society at large for his suicide.

“He ended his life because society wanted him to do so,” said his former flatmate, Kamila Javadzadeh. “He was all alone, struggling to prove that nothing is wrong about being LGBT. But he failed to convince his own family.”

Yet one 32-year-old lesbian, who declined to give her name, stopped short of calling life in Azerbaijan as a LGBT person “a tragedy.” At least no public calls for violence against LGBT Azerbaijanis have been made, she explained. “But it is not OK at all,” she emphasized. After years of confronting hostility, however, she simply no longer expects tolerance.