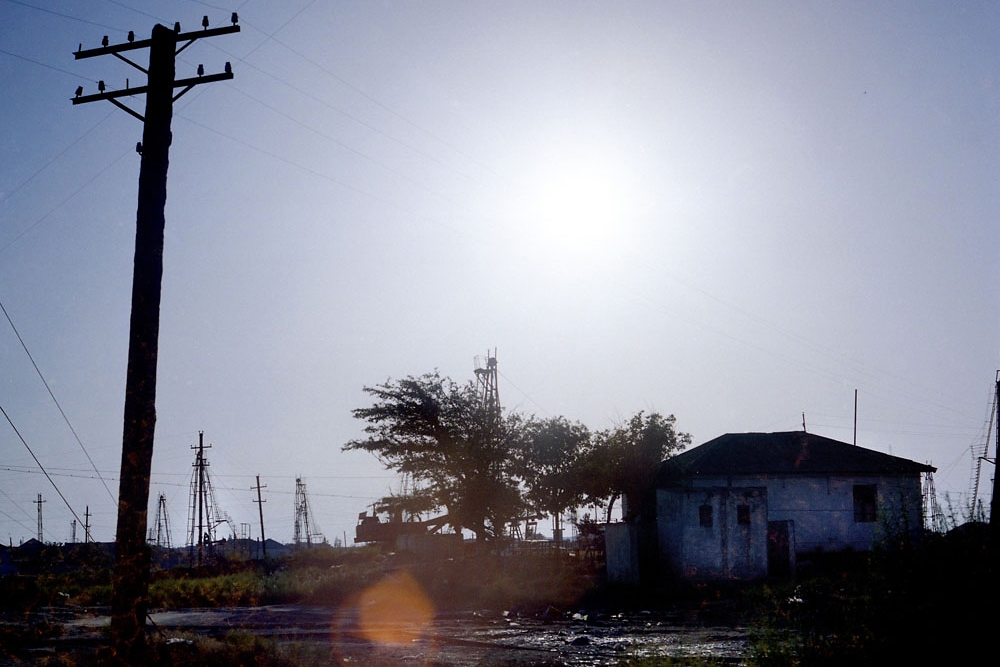 Many houses built in the suburbs of Baku near oil fields are being bulldozed by SOCAR, the State Oil Company of Azerbaijan. (Photo: Rena Effendi)

Rights activist Idrak Abbasov first learned that the State Oil Company of Azerbaijan had an interest in his suburban Baku home when he received a call from frantic family members telling him that company bulldozers had started demolition work.

The incident highlights how property title confusion is creating space for arbitrary government action in Azerbaijan. Like most of their neighbors, the Abbasovs obtained the land on which their home stood without receiving a clear title to the property. They had built the dwelling in 1994, during the early post-Soviet period, when public understanding about private property ownership was still sketchy in Azerbaijan.

The family lived in the house without trouble until the State Oil Company, known as SOCAR, claimed ownership of the site as part of a joint project to develop local oil resources with Global Energy Azerbaijan Ltd, the Turan news agency reported. But SOCAR did not make its claim in court. Instead, it simply deployed bulldozers. Media outlets reported that Abbasov’s father, mother and two brothers came to blows with the SOCAR demolition team and were hospitalized. None of the neighboring residences, including that of Parliamentary Speaker Ogtay Asadov, were disturbed.

Abbasov argues that his work monitoring human rights in the autonomous republic of Nakhchivan for the Institute for Reporters’ Freedom and Safety was the reason why bulldozers targeted his home in the Baku suburb of Sulutepe in September. Government sensitivity runs strong about any critical reporting on Nakhchivan, the native region of President Ilham Aliyev’s family.

The issue extends far beyond the Abbasov case. Residents of hundreds of settlements are in a similar situation, according to Ramil Osmanov, head of the Property Market Participants Public Union, which studies property market trends. He estimates the number of “illegal” houses across Azerbaijan at more than 400,000.

“People bought land plots from employees of state agencies, like SOCAR, from municipalities after local government bodies were established in 1999, [and] from private citizens, who occupied plots of land and never legalized their ownership,” Osmanov recounted.

“They paid bribes, fines to the local police while they built their houses, but they lived there for many years, paid for [public] services; in some cases, developed the area,” he continued. “Now, when the former owner comes with claims, all these people may lose their homes.”

Azerbaijani law stipulates that a court ruling is required before residents of a house, including squatters, can be forced to vacate a building. The provision, however, appears to be widely neglected.

In some past cases, SOCAR representatives have justified demolitions by arguing that the company was following safety guidelines: illegal constructions near oil wells purportedly posed a public hazard. But in the Abbasov case, there was no well near the family home.

SOCAR representative Nizamaddin Guliyev told EurasiaNet.org that he was not aware of the Abbasovs’ case and insisted repeatedly that the company never acted without court permission. “If any demolition took place, it happened to prevent the construction of new facilities in the yard,” Guliyev claimed. Idrak Abbasov maintains that no new construction had been underway on the site.

Baku property lawyer Muzaffar Bakhishov contended that city officials have long allowed the issue of property title confusion to fester. “The city of Baku started growing since there were no jobs in the regions, and those who moved to the capital needed land plots or apartments. But there were not enough legal offers on the market,” Bakhishov explained.

In outlining a brief history of the problem, Bakhishov said Baku’s district governments began selling plots of city-owned land to accommodate the legions of citizens who were migrating to the city. “However, the Baku city government executives and the government never outlined a map of land owned by the municipal districts and, it turns out, all the land plots sold by the district governments in Baku are illegal,” Bakhishov alleged.

Sales of district-government land were banned in 2009 while the State Land and Mapping Committee tried to take inventory of city property. Since then, officials have had little incentive to address the problem, Bakhishov said, adding that residents’ illegal status rendered them vulnerable to inspections and, hence, provided a lucrative source of bribery.

In March 2011, President Aliyev ordered the government to start legalizing non-registered land plots, but no progress has been made in the ensuing months. The process became bogged down by a lack of legal provisions for establishing property titles post-facto, as well as by a dearth of data on the problem. The Baku city government and State Committee on Property Issues report that a master list of illegally built houses has not been completed.

Of late, officials have also discovered that they can use the lack of clarity to their advantage, alleged Amid Rasul Jafarov, coordinator of the Human Rights Club, which monitors property demolitions. Jafarov believes that officials are now pursuing a “deliberate strategy” that seeks to prolong title confusion in order to use it as an instrument of coercion.

“In some cases, they [authorities] take violent and aggressive action against the most outspoken citizens, so this property issue is also being used as a tool for punishment” Jafarov asserted. Protests do not occur because residents of illegal buildings assume they have been judged guilty from the get-go.

Jafarov cited the case of human rights activist Leyla Yunus,who lost a legally owned building this spring to a demolition crew on the very day a Baku court ruled against its demolition. No offer of compensation has been made.

The destruction of buildings even with clear property titles has discouraged at least one Baku resident from legalizing his property. “When I see the government destroying legally owned houses, I decided not to waste the energy,” said the resident, who gave his name as Yahya M.

Aytakin Imranova, director at the Democracy and Human Rights Center, said the government does not necessarily “discriminate” when it violates property rights to pursue its own objectives. “[T]hose who own the land legally, those who don’t; those who are active citizens, those who are not; those who are opposition or members of YAP [the governing Yeni Azerbaijan Party] are all equal in the process,” Imranova said. “You may lose your property in one night -- just because someone in the government wants it so.”

Khadija Ismayilova is a freelance reporter in Baku and hosts a daily program on current affairs broadcast by the Azeri Service of RFE/RL.