Activists had been pushing for their government to adopt the landmark international anti-domestic violence agreement. But “big brother” Turkey has made it more difficult. 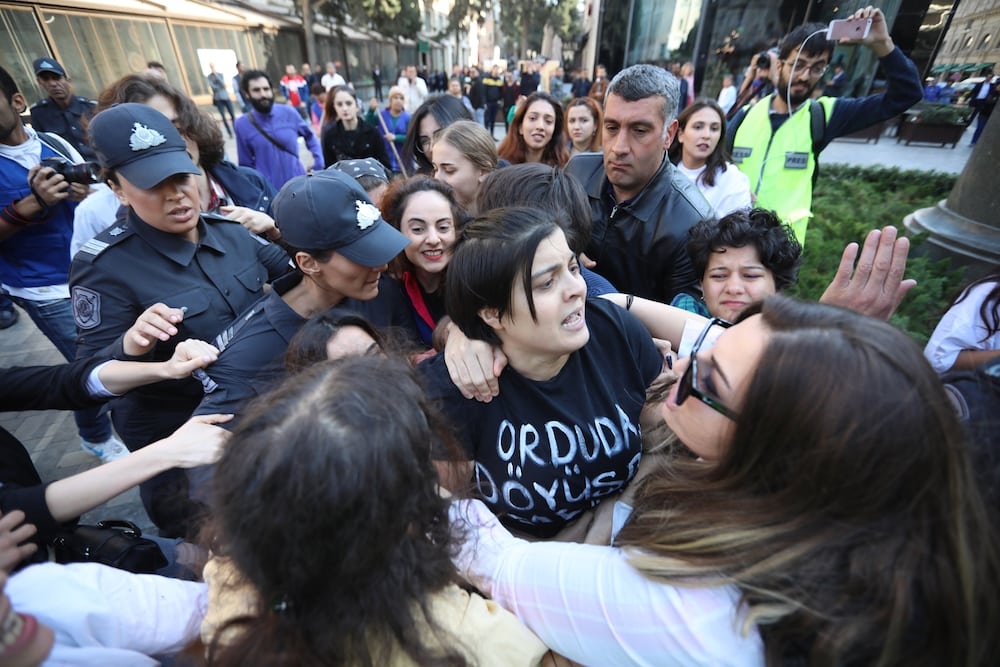 When Turkish President Recep Tayyip Erdogan abruptly withdrew his country from the Istanbul Convention, a landmark international agreement to prevent domestic violence, the impact was felt not only in Turkey.

In Azerbaijan, where there had been some recent moves toward signing the treaty, conservatives seized on the March 20 Turkish rejection to argue that they should follow suit.

One newly launched conservative Azerbaijani Facebook page posted as soon as Erdogan made it official: “We have to share this news with you even though it’s late at night: Erdogan officially withdrew Turkey from the Istanbul Convention. It is such good news.”

Azerbaijan has long had close ties to Turkey, and relations between Ankara and Baku have become only tighter following Turkey’s aid to Azerbaijan in last year’s war with Armenia. While this cooperation is mostly strategic, the fallout from the Istanbul Convention rejection suggests that it could be social, as well.

Azerbaijan’s government had already been wary of the convention because it requires serious political, social, and legal commitments, said Shahla Ismayil, the head of the NGO Women’s Association for Rational Development. Erdogan’s rejection only gave Baku more ammunition, she said.

“Turkey’s withdraw from the convention also moves Azerbaijan away from this process,” Ismayil told Eurasianet. “Azerbaijan has always followed Turkey's example, calling it a ‘big brother’ and doing what it does.”

Azerbaijan’s government initially made positive signs about signing the convention, which the Council of Europe drafted in 2011. In 2013, Sahiba Gafarova – a member of the ruling New Azerbaijan Party and now the head of parliament – presented the convention in parliament and argued that it was a comprehensive way to deal with domestic violence by protecting victims and punishing perpetrators. The following year, President Ilham Aliyev was asked about gender equality at a session of the Parliamentary Assembly at the Council of Europe; he denied that Azerbaijan had any problems in the area and said: “We are currently considering the Istanbul Convention and have no objections towards it.”

But his government never made any real effort to sign it. (Of Azerbaijan’s neighbors, Georgia has signed and ratified the convention, Armenia has signed it but not ratified it, and Russia has not signed it.)

In recent years, the Istanbul Convention has become one of the most contentious issues in the culture wars in the region, with conservatives arguing that it is a Western imposition aimed at destroying traditional family values. Opponents have seized on and distorted statements in the convention about gender to argue that will impose a so-called queer agenda on signatory states.

Azerbaijani conservatives were cheered by this growing international opposition. A 2020 story in Yeni Musavat praised resistance to the convention not only in Turkey but in Poland and Croatia, as well. It was headlined “Istanbul Convention shakes the foundations of society, threatens the existing philosophy of the family.”

And recently, the attitude of the Azerbaijani government has been very different from Aliyev’s in 2014. As activists have pushed for Azerbaijan to sign the treaty and adopt its provisions, there has been an anti-feminist and anti-queer backlash.

In August 2020, one member of parliament, Malahat Ibrahimgizi, complained that the convention was “incompatible with the national values of our people” and was being promoted by a “fifth column in order to create problems in our society.”

Meanwhile, Azerbaijan did adopt legislation, approving the National Action Plan on the Prevention of Domestic Violence in November 2020. But women’s rights activists call it toothless compared to the rigorous enforcement that the Istanbul Convention would entail.

In some cases, the Azerbaijani law allows the victim to drop charges against the defendant, which opens the door for someone who abused a victim to continue to threaten them. “So the woman becomes a target,” said Vafa Rustam, a lawyer who focuses on women’s rights.

The Istanbul Convention, by contrast, stipulated that prosecutors should continue to investigate such cases even if the defendent withdraws the charges. That is the approach also taken by the European Court of Human Rights case law and the UN’s Convention on the Elimination of All Forms of Discrimination against Women. “The Istanbul Convention follows international practice, and is a far better approach,” Rustam told Eurasianet.

“Joining and ratifying the convention does not allow you to say ‘I did it’ without doing it. It requires you to act,” Ismayil said. “This is the main barrier standing in the way of Azerbaijan signing.”

Government officials do still occasionally gesture towards adopting the convention. In September 2019, the chair of the parliament’s Committee on Family, Women, and Children, praised the document at a meeting with the president of PACE. And that October, a day after a group of feminist activists rallied in Baku demanding the convention be signed, the same parliamentary committee announced that it had submitted to the government a package of proposals to sign the document.

But activists are skeptical. “I have little hope that the government is going to adopt the convention,” said Gulnara Mehdiyeva, a prominent feminist activist. “Adopting it would require serious systemic change, new laws. It would give the government a lot of responsibility and they will avoid this responsibility as much as possible,” she told Eurasianet.