Neither side seems to want the minefield cleared.

A mine warning near the Georgian-Azerbaijani border crossing known as Red Bridge. (HALO Trust/Halotrust.org)

An hour’s drive from Tbilisi lies a minefield, the largest remaining in Georgia. For more than 25 years, this part of Georgia has been effectively controlled by Azerbaijan’s armed forces.

An international aid agency is eager to remove the mines. The HALO Trust, a British charity celebrated for its mine-clearance work around the world, has been petitioning Tbilisi for permission to clear the field since 2005. It has secured millions of dollars in funding. But neither Georgia nor Azerbaijan seems eager to see the work completed.

According to HALO Trust, mines near the border crossing known as Red Bridge have killed 13 locals since 1991. To the 4,400 residents of the area, the subterranean explosives are a source of constant fear.

Azerbaijani forces laid the minefield at the height of Azerbaijan’s war with neighboring Armenia over the disputed territory of Nagorno-Karabakh. At the time, Georgia was a dysfunctional state, with loosely aligned paramilitary groups controlling large parts of the country.

Strategists in Baku feared the unruly republic would offer the Armenians an extra front in the war, acting as a potential springboard for attacks.

The Karabakh War ended with a 1994 ceasefire. And though Azerbaijan finished clearing its side in 2016, the Georgian side remains mined. 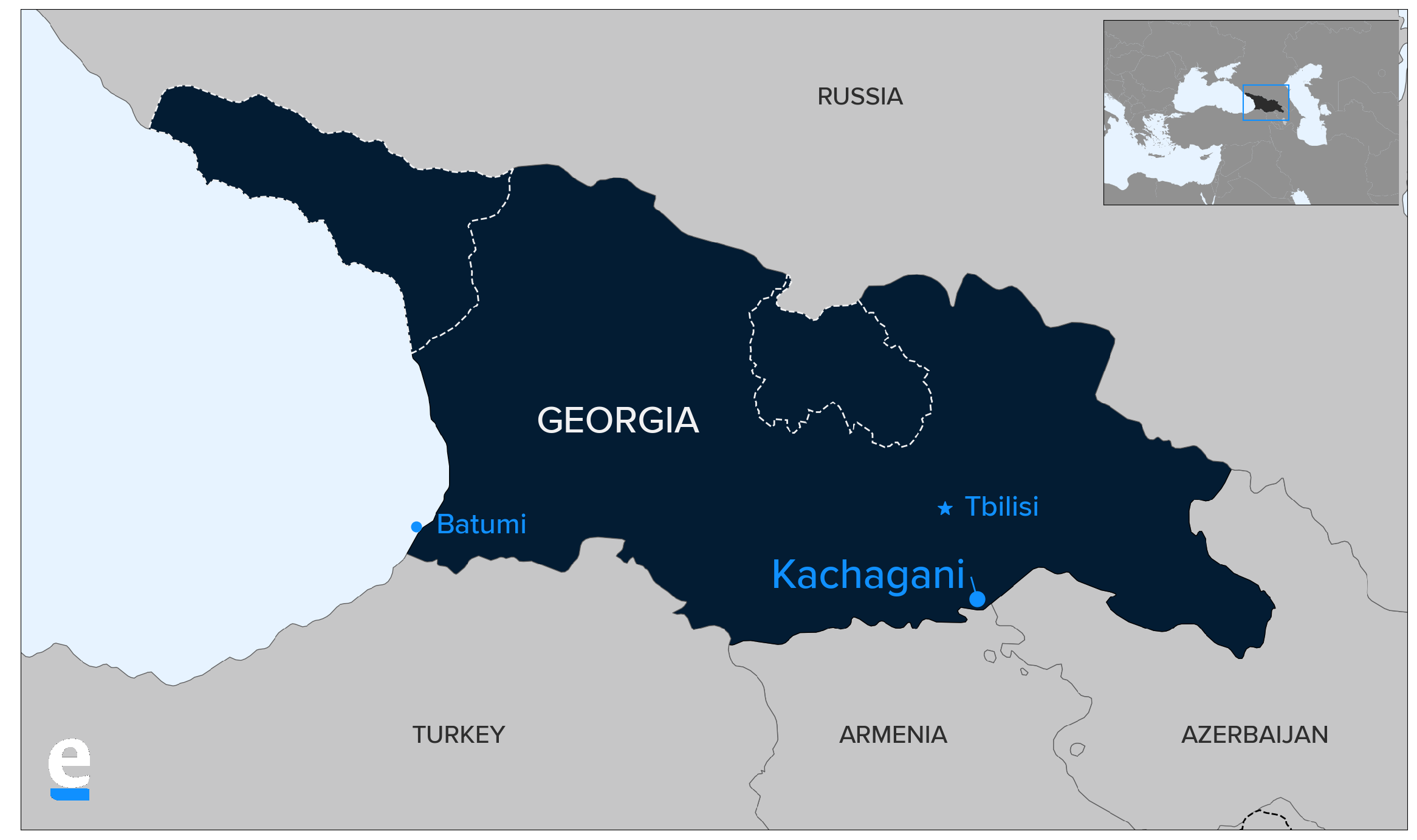 Twenty-five-year-old Sarhan Musayev, a shepherd, lost a leg after stepping on an anti-personnel mine in 2013.

“I thought I was going to die,” Musayev told Eurasianet. “All I could think of was Abdullah, my neighbor who was killed.”

Today, Musayev lives in a small wooden cottage in the village of Kachagani with his mother. Conditions are poor, with both relying on subsistence farming and a small stipend from the government.

“Nobody came to see me. I just remember speaking to someone with a [television] camera and that was it. The Red Cross gave me a prosthetic leg and the Georgian government provides me with just 100 lari ($38) per month.”

But Musayev directs his anger not toward Tbilisi, but to Baku.

“Who the hell do they think they are?” he asked with barely concealed anger. “This is Georgian territory!”

Not only does Azerbaijan keep mines in the region, it sometimes sends soldiers across the border to inspect them, JAM News reported earlier this year, citing an unnamed former official from Georgia’s Ministry of Defense.

“Armenian military aggression against Azerbaijan is still ongoing,” Hikmet Hajiyev, a spokesperson for Azerbaijan’s Foreign Ministry, told Eurasianet. “This area is located at the juncture of the three countries’ borders and the matter is considered from the point of view of national security requirements. Between Azerbaijan and Georgia all issues are discussed in the atmosphere of friendship and mutual understanding.”

The Georgian Ministry of Foreign Affairs did not respond to requests for comment.

The mines cover 2.2 square kilometers. HALO Trust estimates the cost of removing them at $3 million over a period of three years.

“We are all scared of these mines, they are dangerous,” said Hussein Husseinov, director of a small school in Kachagani. “We want our children to be allowed to play safely and visit the hills without fear that they will get hurt.”

In 2016, the local residents discovered an anti-vehicle mine 800 meters from the border. Parents worry their children will dig up and play with the explosives.

The mines are also volatile. According to employees in the school, a fire in January 2018 triggered nearly 28 mines. Nobody was injured, but that doesn’t prevent local people – a majority of whom are ethnic Azerbaijanis – from pointing fingers at Azerbaijan’s foe, Armenia.

“That fire came from the Armenian side,” said Namazov Iden, a teacher at the school. “I have no doubt that they set them off on purpose.”

Nevertheless, he questions the need for the minefield.

“The mines aren’t protecting anyone. If they’re here to protect us from [Armenians], then they are failing because many of us have died or have been badly injured by them.”

The local government is ill-positioned to offer support. Ekhmidzhian Aliyev, Kachagani’s mayor, sits in a crumbling office with poor lighting and a leaking ceiling.

“People here blame the Azerbaijanis for putting them there, but also Georgia for failing to remove them,” he told Eurasianet. “Ultimately, there’s little I can do about the situation other than raise public awareness about the dangers they pose.”

According to Aliyev, the mines also pose a threat to local farmers’ livelihoods. More than 60 accidents involving livestock in the minefield have been reported to his office.

A donor briefing says Azerbaijan is hostile to outside intervention. In August 2015, after HALO obtained permission from the Georgian Defense Ministry to survey the minefields, Azerbaijan forced the organization to abandon operations.

According to witnesses and the briefing, which has been seen by Eurasianet, as HALO Trust employees approached the minefield about 50 meters from the border, Azerbaijani soldiers mobilized tanks and heavy artillery. The Azerbaijanis demanded HALO Trust leave the area, even though the group was accompanied by officials from Georgia’s Foreign Ministry and border police.

Azerbaijan denies the accusations: They “do not reflect the truth,” said Hajiyev, the Foreign Ministry spokesman.

Since the alleged incident, the Georgian Defense Ministry has suspended all work near the border.

Due to funding cycles, HALO will have to exit Georgia at the end of 2018 if permission is not granted to clear the area, Irakli Chitanava, the organization’s program manager, told Eurasianet. After HALO has left, the cost of reopening the program would be prohibitive to donors, the organization argues.

The cause of the delay is not immediately clear. There are the reports of Azerbaijani hostility, which some sources attribute to HALO's work in the Azerbaijani region of Nagorno-Karbakh, which is controlled by Armenian forces.

But HALO has also reportedly complained to donors that it is receiving insufficient support from the Georgian government. Indeed, the Georgians may be motivated to keep the minefield active: The mines make policing the frontier much easier, a source close to the local border police told Eurasianet on condition of anonymity.

This isn’t the only border dispute Georgia has with its neighbor and ally.

In 1996, the two countries agreed to delimit and demarcate the border surrounding the David Gareja Monastery. They agreed on 70 percent of the border by 2007, though little progress has been made since.

As with the area abutting Red Bridge, Azerbaijan deems the area around the monastery to be of military significance due to its position on a hilltop, a “strategic height.” The total area, including nearby ancient caves, is about 25 square kilometers.

Tensions have flared on occasion. In 2012, Azerbaijani border guards entered the monastery complex and stopped tourists and priests from entering. The incursion led to a diplomatic crisis and the presidents of the two countries discussed the issue on the sidelines of a NATO summit in Chicago, resulting in an agreement to let Georgian priests return.

Concerns about Azerbaijani encroachment on Georgian sovereignty have again become more sensitive since the 2017 kidnapping of dissident Azerbaijani journalist Afgan Mukhtarli in Tbilisi.

Georgia is increasingly dependent on Azerbaijan for energy (Azerbaijan accounts for 90 percent of Georgia’s natural gas supplies). Some government critics have taken to dubbing Georgia “Socartvelo” – a portmanteau combining the name of Azerbaijan’s state oil company, SOCAR, with the Georgian-language word for the country, Sakartvelo.