Azerbaijan: How Will Baku Handle the Oil Price Slide? 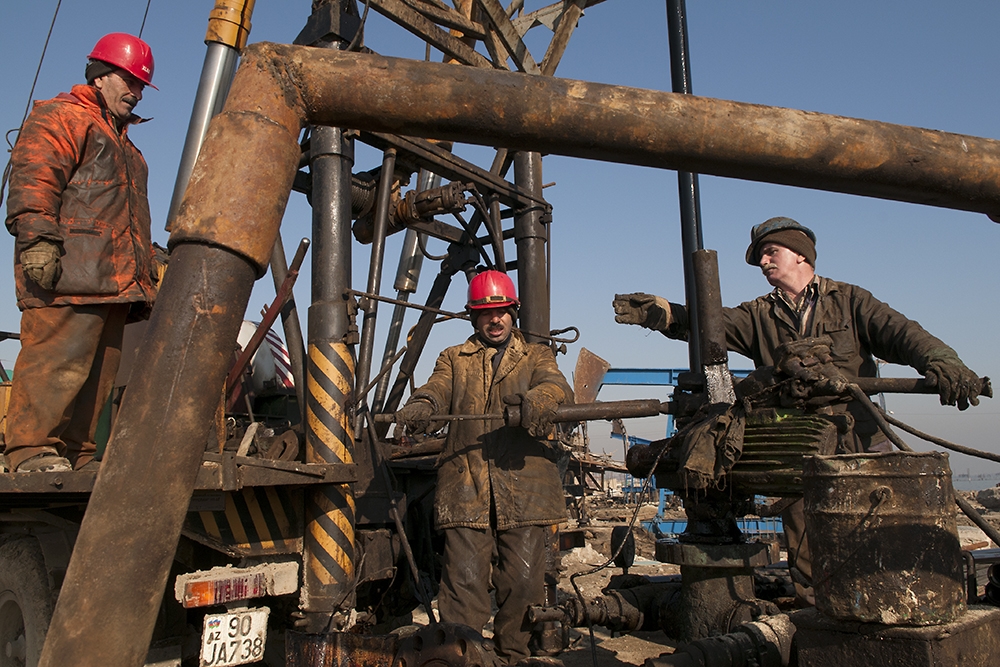 Oil workers with SOCAR, the Azerbaijani state oil company, prepare a new drill for a well at an oilfield on the outskirts of the capital Baku in January 2008. At $145 per barrel in June 2008, oil prices have since slipped to $57 in December 2014, which may have a serious impact on Azerbaijan’s 2015 budget. (Photo: Dean C.K. Cox)

“Azerbaijan is not afraid of $60 per barrel,” a headline on the pro-government Azerbaijani news site Trend proclaimed recently. But with Brent crude oil, the benchmark for the oil market, now hovering around $60 a barrel, Baku might well have something to fear.

Baku’s 2015 state budget was calculated based on an oil price of $90 per barrel. About 53.5 percent of the government’s roughly 19.4-billion-manat ($24.7 billion) budget comes from the State Oil Fund, a government-run piggy bank that controls money generated by Azerbaijan’s oil projects, and about some 20 percent from the taxes paid by oil-sector companies, according to analysts.

The government, for now, maintains that the budget can handle lower oil prices. Eventually, officials believe those prices will rise again.

“If we take a look at the past 20 years, we can see that the oil prices have [constantly] changed,” commented Energy Minister Natiq Aliyev to Trend news agency on December 17.

Yet, in an interview with Russia’s Rossiya-24 TV channel earlier in December, President Ilham Aliyev admitted that falling oil prices could have a negative impact on the government’s budgetary plans.

One-third of the 2015 budget is slotted for investment projects; 20 percent of those investments are slated to fund a presidential pet project, the May 2015 European Olympic Games in the capital, Baku, economists estimate.

No sign has emerged that spending for the Games could be slashed, although the president stated that infrastructure projects could be reduced, if need be. He did not elaborate.

Construction projects accounted for 12 percent of Azerbaijan’s 2013 Gross Domestic Product of $73.56 billion; the industry generates the most economic activity outside of the energy sector, noted economist Samir Aliyev, editor-in-chief of the Economic Forum Magazine, an analytical monthly.

If the government halts such projects now, it “will leave lots of people unemployed,” he predicted.

President Aliyev has forecast no economic changes if the price of oil does not fall beneath $60 per barrel. Since that prediction, the price has dipped below that point, but has subsequently moved higher.

Where the price will go in the coming weeks is hard to predict. What is certain is that the Azerbaijani government’s margin for expansive spending is slim.

Economist Aliyev claims that the fall in the price of oil means that the Oil Fund already expects a 2.5-billion-manat deficit (some $3.1 billion) this year.

In comments to EurasiaNet.org, Oil Fund spokesperson Jamala Aliyeva confirmed that “annual transfers and financing of strategic projects … may cause [a] deficit SOFAZ budget for 2015” as world oil prices decline. She did not cite a specific figure, however.

Like Energy Minister Aliyev, she said she does not expect a long-term drop. If need be, Aliyeva continued, the Oil Fund “may use its assets to cover the gap between revenues and expenditures in the short run.”

The Oil Fund is not the only dollar storehouse that could be affected by the slump in oil prices. Economist Aliyev claims the Central Bank’s reserves already have been impacted, too.

The Central Bank’s website, though, shows only a slight dip in reserves (from $15 billion to $14.99 billion) from May through November. The Bank did not respond to a request for comment in time for publication.

Government critics contend that authorities have not done a good job in preparing the country for lean times. “They should have fought corruption, diversified the state budget revenues, encouraged small and medium enterprises,” complained economist Natig Jafarli, executive secretary of the opposition REAL movement. “The government never did that.”

Fellow economist Aliyev estimates that small and medium enterprises account for only 1.7 percent of Azerbaijan’s GDP.

Vahid Ahmedov, a member of parliament’s Economics Committee, says that the government is paying attention to diversification. Azerbaijan’s non-oil economic sectors have grown by “10 to 15 percent over the last two to three years, and we keep working on it,” he claimed.

Ahmedov believes that Azerbaijan’s currency reserves will create a buffer against lower oil prices. “I think the budget can manage it and people will not feel the impact of the decrease in oil prices for the next two years because of the reserves,” said Ahmedov, a non-party MP who tends to align with the government on most issues.

For those who already struggle to make ends meet in Azerbaijan, lower oil prices are a source of unease. Salman Guliyev, 74, who sells candies in one of Baku’s backstreets, worries about what higher prices will mean for his ability to support his disabled wife and himself.  He now receives a monthly pension of 150 manats ($191.52). “I wish we had more money to cover our basic expenses,” he said.

As yet, the government has not commented about additional social welfare measures to help disadvantaged Azerbaijanis cope with harder times. But 28-year-old car-service employee Taleh Hasretov is not concerned. Admittedly not a news-junkie, he has only optimism for the year to come.

“I know that the government has saved a lot of money, and even if oil prices go down, we will not face serious problems,” he said.