Germany is deporting Azerbaijanis in large numbers, and the politically active ones are being imprisoned after they get home. 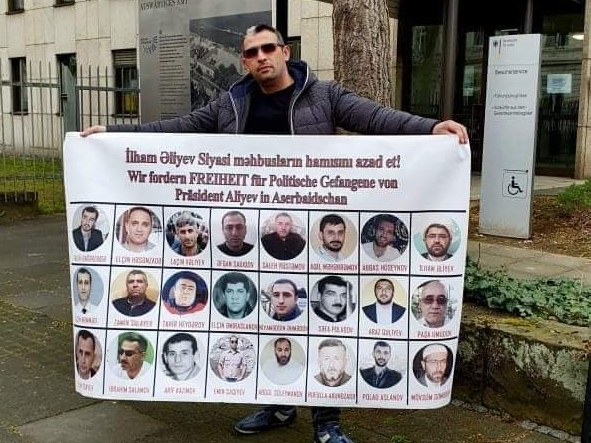 Jafar Mirzayev before he was deported from Germany (social media)

Yet another Azerbaijani activist deported from Germany has been handed a prison sentence after spending a year in pre-trial detention.

Jafar Mirzayev, a member of the opposition Popular Front Party who was deported from Germany to Azerbaijan in November 2021 and arrested a year ago, was sentenced to six years in prison on drug charges on January 16 by the Baku Grave Crimes Court. In his final words at the trial, Mirzayev denied the drug charges and claimed they were invented because he attended rallies against the Azerbaijani government in Germany.

“At the police station, they took a ‘statement of confession’ from me under pressure. If I were so honest, why didn't I disclose information about the source of my drugs and the person I was going to sell them to? Do you not have questions as a judge?” he asked the presiding justice. “If I had drugs, why didn't they go and search my house, maybe I had them in my house too? Aren’t these questions interesting to you?”

Mirzayev went to Germany with his wife in 2014 and asked for political asylum. After living there for 7 years and being denied asylum repeatedly, a court ruled that he faced no threat of persecution in Azerbaijan and should be returned there. Mirzayev asked the court for time to leave the country but was deported in November 2021. According to Mirzayev, two months later, back in Baku, plainclothes officers bundled him into a car, took him to the police station, beat him, and produced a report claiming he had illegal drugs.

Germany is the leading deporter of Azerbaijanis in Europe. Mirzayev is one of six activists deported from Germany and arrested after their return to Azerbaijan since 2021.

Punhan Karimli, another Popular Front member deported in November 2021 and arrested in January 2022, was sentenced to six years on drug charges in July. In September, the court sentenced Malik Rzayev, another activist deported in July 2021 and arrested in October, to seven years on drug charges. The trials of two more are still ongoing. Another deportee, Ziya Ibrahimov, who was arrested on arrival in May 2022 at the airport in Baku, was freed in November. His case was reportedly non-political; he had been sued by his ex-wife for alimony arrears.

In 2014, the European Union and Azerbaijan signed an agreement on “readmission of persons residing without authorization.” Since then, more than 2,000 Azerbaijanis have been deported from the European Union. Of those, 83 percent came from Germany, Azerbaijan’s State Migration Service has said.

In the first eight months of 2022, 141 Azerbaijanis were deported from Germany. That’s according to a response to a parliamentary question from Bundestag member Clara Bünger of Die Linke party, obtained by VICE News. In the same period, Germany’s Federal Office for Migration and Refugees decided on 582 asylum applications, allowing 46 to stay.