Ground was broken for the Fuzuli airport only in January, and it now has hosted its first passenger and cargo flights. But some wonder if the government’s enthusiasm for airports isn’t excessive. 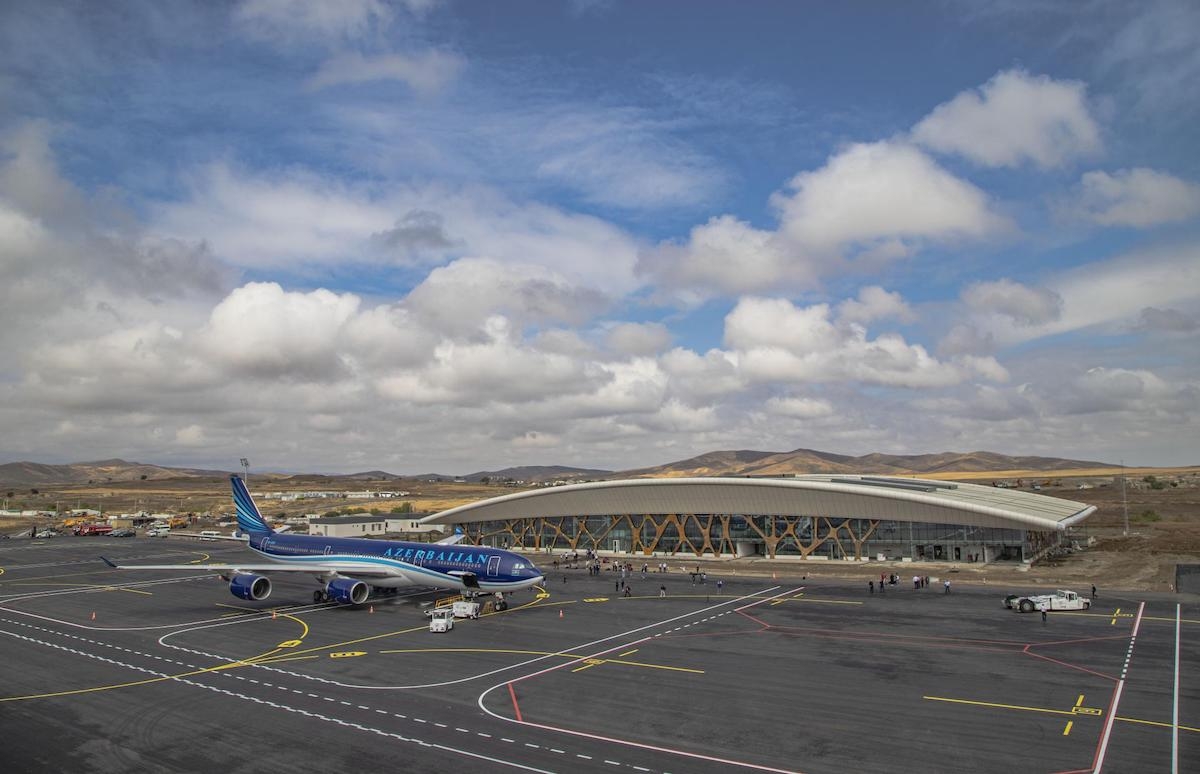 Azerbaijan’s flag carrier has made its first flight to the newly constructed Fuzuli airport, in territory that Baku retook in the war with Armenia less than a year ago.

The Azerbaijan Airlines Airbus S340-500 – the biggest passenger plane in its fleet – made the half-hour flight from Baku to Fuzuli International Airport on September 5. Most of the passengers were reporters; the airport has been a showcase of post-war reconstruction in and around Karabakh, along with several other transportation projects including a six-lane highway and two additional airports..

On the same day a Boeing 747-400 – one of the largest cargo aircrafts of the state cargo airline, Silk Way Airlines – also landed in Fuzuli, marking Azerbaijan’s first post-war air cargo delivery to Karabakh.

Journalists on the trip reported that construction of the airport was incomplete; officials say it will be fully ready by the end of September. Selim Akbay, the project manager for the airport’s construction, told journalists that it was built by 12 Turkish companies, utilizing construction equipment “from Turkey, Russia, China, the United States, Germany, Finland and other countries.”

An under-construction air traffic control tower meeting international standards will eventually allow for flights from abroad to use the airport, the airline said in a press release.

President Ilham Aliyev laid the foundation for the Fuzuli airport on January 14, saying it would primarily service Shusha, another city retaken by Azerbaijan during the war and which has been since declared the cultural capital of the country.

“There was no infrastructure here, we created it from scratch,” Kamil Aliyev, the director of the construction company Azvirt, told reporters at the opening in Fuzuli. “A lot of mines had to be cleared away.”

The government has also been building airports in Lachin and Zangilan, two other districts returned to Azerbaijan last year. Aliyev laid the foundation for the Lachin International Airport on August 15.

It is not clear how much the state has been spending on airport construction. Recently released data from the State Statistics Committee showed that the government had spent a total of 269 million manats ($158 million) on post-war construction in Karabakh in the first half of 2021. Of that the largest share was spent in Fuzuli: 75 million manats ($44 million).

Government officials and affiliated experts have suggested that the airports will boost the region’s economy. "Given the economic potential of the liberated areas, the airport can facilitate the export of products to be produced in these territories,” Vugar Bayramov, an economist and member of parliament, told the state news agency Azertag.

Others are less optimistic. The Fuzuli airport may justify itself if the region becomes a tourist hot spot, but that promises to be a "long and difficult process,” economist Toghrul Valiyev told local news outlet Mikroskop Media. "Because there is nothing there for now, and the renovation of everything, and the presentation to the world market after renovation, needs time," he said.

The airport in Zangilan, meanwhile, has been presented as a hub connected to a future land transportation route through southern Armenia connecting the Azerbaijani mainland to the exclave of Nakhchivan, a route known as the “Zangezur Corridor” in Azerbaijan.

"There is the issue of Zangilan-Zangazur transportation, but that will not even have a big impact for the region, let alone the world, because at the same time cargo is going to be transported via Iran and Turkey," Valiyev said.