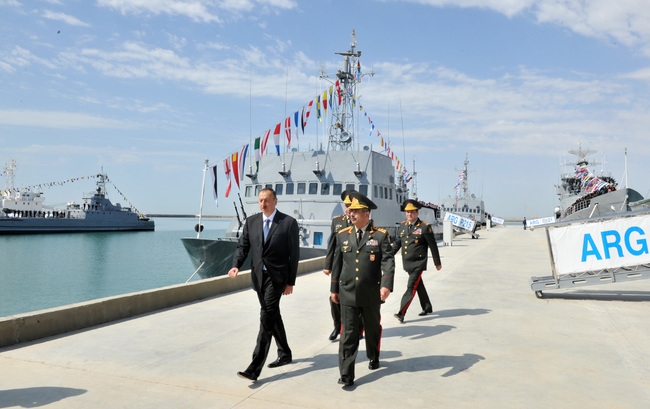 Azerbaijan has inaugurated a new base for its navy on the Caspian Sea, which it calls "the largest and most modern military object in the Caspian basin."

The base was formally opened on June 25, Azerbaijan's Armed Forces Day, in a ceremony with President Ilham Aliyev.

"Today we have gathered for the opening of the naval base. This event shows the strength, the power of our country," Aliyev said at the ceremony. "This base meets the highest world standards and is one of the biggest military objects created in recent years in Azerbaijan."

The old base, near the center of Baku, was the home of the Soviet Caspian Fleet. In 2011 Azerbaijan announced it was leaving that base and building a new one as it sought to expand the very modest naval forces it inherited after the collapse of the Soviet Union.

The new base is in the town of Puta, about 30 kilometers southwest of Baku, and was originally scheduled to open last year. The announcement of the new base included some detail on the living, dining, and medical facilities for sailors but somewhat less on the operational details of the base. It did emphasize that it would facilitate real-time monitoring of activity in the Azerbaijani sector of the sea by means of surveillance stations on islands and on naval vessels. It also will allow for information sharing between naval forces, the border control service and the State Maritime Administration.

There was no mention of what sort of vessels the base might accomodate, but Azerbaijan has been active in recent years in trying to enlist foreign partners in naval shipbuilding.

At the ceremony, Aliyev did not allude to what security threats Azerbaijan perceives on the sea, instead emphasizing the Caspian's status as "a sea of peace and cooperation," the standard formulation of all the Caspian littoral states that masks the growing tension around the sea.

In Azerbaijan's case it is particularly worried about Iran, with whom it has had a number of minor incidents. In the longer term it is worried about Russia, which strongly opposes the construction of a trans-Caspian gas pipeline from Turkmenistan, which Baku in principle supports. Russia also has tried to get all the littoral states to restrict the militaries of outside powers (meaning, the U.S.) from getting involved on the Caspian, which Baku has pushed back on. Nevertheless, Russia and Azerbaijan are slated to carry out their first-ever joint naval exercises in September.