Azerbaijan: Iran Nuke Deal Would Be a Mixed Bag for Baku 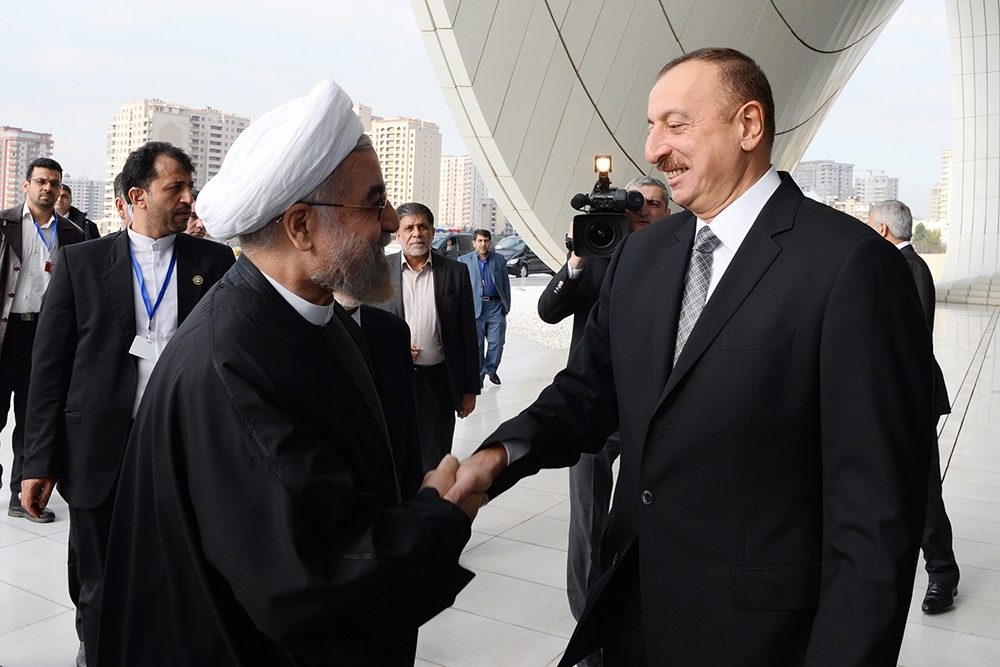 Azerbaijani President Ilham Aliyev welcomes Iranian President Hassan Rouhani at a business forum at the Heydar Aliyev Center in Baku in mid-November 2014. As Iran and the 5+1 group continue negotiations on a deal to monitor Iran’s nuclear program, Azerbaijan may be positioning itself to benefit from the lifting of sanctions with the opening of new trade and tourism opportunities. (Photo: Azerbaijan Presidential Press Office)

A lot still has to happen before a deal to monitor Iran’s nuclear program can be implemented. But if it goes through, Azerbaijan could face a diplomatic quandary.

Representatives of the 5+1 group (comprising the United States, United Kingdom, Russia, China, France and Germany) and negotiators from Iran agreed on the broad outlines of a deal on April 2. But plenty of details still need to be filled in. The two sides are set to meet again in late April in Vienna to address unresolved issues. The aim is to have a comprehensive deal finalized by the end of June.

From Baku’s point of view, a nuclear deal, along with a possible rapprochement between the West and Iran, would have its advantages and disadvantages.

On the positive side, a nuclear deal would dramatically reduce the chance of an armed conflict. Any such conflict would place Azerbaijan in tough spot – between its American and Israeli allies and Iran, a neighboring state. Baku would be vulnerable to Iranian retaliation against Azerbaijan’s energy infrastructure, as well as possible domestic unrest connected with the country’s sizable Shia Muslim population. In addition, a nuclear deal could prompt the lifting of international sanctions against Iran, thus opening new trade and tourism opportunities for Azerbaijani entrepreneurs.

But the implications are not all good for Baku. A rapprochement between the West and Iran could also push President Ilham Aliyev’s administration outside of its diplomatic comfort zone.

Azerbaijan’s strategic importance in the West, especially in Washington’s eyes, has been predicated on its role as a pro-Western bulwark against Iran. Azerbaijani diplomats and lobbyists have assiduously cultivated the image of the country as a pro-Western, Israel-friendly, secular Muslim state opposed to Iran on both strategic and ideological grounds. A rapprochement between the West and Iran, then, would compel Azerbaijani leaders to develop an alternative narrative in order for Baku to maintain the diplomatic status quo.

Developing a new basis for the maintenance of strong Western ties to Azerbaijan could pose a significant challenge for Baku. Beyond the Iranian situation, the political and economic factors that encouraged Western states to foster close ties with Azerbaijan have changed significantly over the past year. For one, the relatively cheap price of oil has diminished Azerbaijan’s importance as an energy producer. Second, the Azerbaijani government’s ongoing crackdown on any form of domestic criticism has reached a point where it is hard for Western governments and institutions to ignore.

The recent decision of the Extractive Industries Transparency Initiative, or EITI, to downgrade Azerbaijan’s status indicates that Western patience with Baku is wearing thin.

It is no secret that Azerbaijan’s relations with United States have soured of late. Baku has helped bring on the chill in relations by cracking down on the Baku office of US-funded Radio Liberty and harassing and arresting civil society activists and journalists.

Azerbaijan has also sent mixed messages to Washington. In December, for example, top presidential aide, Ramiz Mehdiyev, published a rambling manifesto in which he accused US officials of trying to hatch a “color” revolution in Azerbaijan. Later, however, Azerbaijan’s ambassador to the United States, Elin Suleymanov, came out with a statement reaffirming the country’s Western geopolitical orientation. The stark difference in comments may be a reflection of tension within Azerbaijan’s foreign policy establishment. But it also shows that Azerbaijan is not willing to give up on its relationship with the United States.

At the same time, it is plausible that Baku has particular grievances with the Obama administration. Azerbaijani officials tend to see the Obama-led White House as weak and naive in its handling of the Arab Spring and failure to stand up to Russia. Azerbaijani officials also suspect that Washington is making too many concessions to Iran.

To a certain extent, Azerbaijani officials feel underappreciated by the United States. From Baku’s perspective, the United States has not reciprocated several diplomatic favors made by Azerbaijan. These include Baku’s role in bolstering energy security of American allies in Europe, support for US military operations in Afghanistan and Iraq, a vote in the UN condemning the Assad regime in Syria and counter-terrorism cooperation. Instead of anticipated rewards, Baku has had to contend with US criticism of Azerbaijan’s human rights record. Such criticism has been interpreted by the Aliyev administration as a call for regime change.

Azerbaijani officials might prefer not to cut ties with America, but to deal with a different kind of US administration, one that would abandon Obama’s policy of engagement with Iran, (though stopping short of going to war with Tehran), de-emphasize human rights and return to security-based relationship. In this scenario, Baku would retain its relative regional importance.

The ongoing crackdown in Azerbaijan, however, makes it much harder for the United States to alter its current course. By cracking down on its secular, liberal-minded critics, authorities in Baku may think they are hedging their bets against a Euromaidan-style revolution in Azerbaijan. But they are actually clearing the way for a more radical, Islamist opposition.

If a rapprochement between the West and Iran gains momentum, Baku will have greater difficulties deflecting Western criticisms of its human rights record. The West will not necessarily automatically side with Baku in its rows with Tehran over the influence of political Islam.

The deal between the world powers and Iran is to the long-term benefit of Azerbaijan. This cannot be necessarily said about the Aliyev administration.