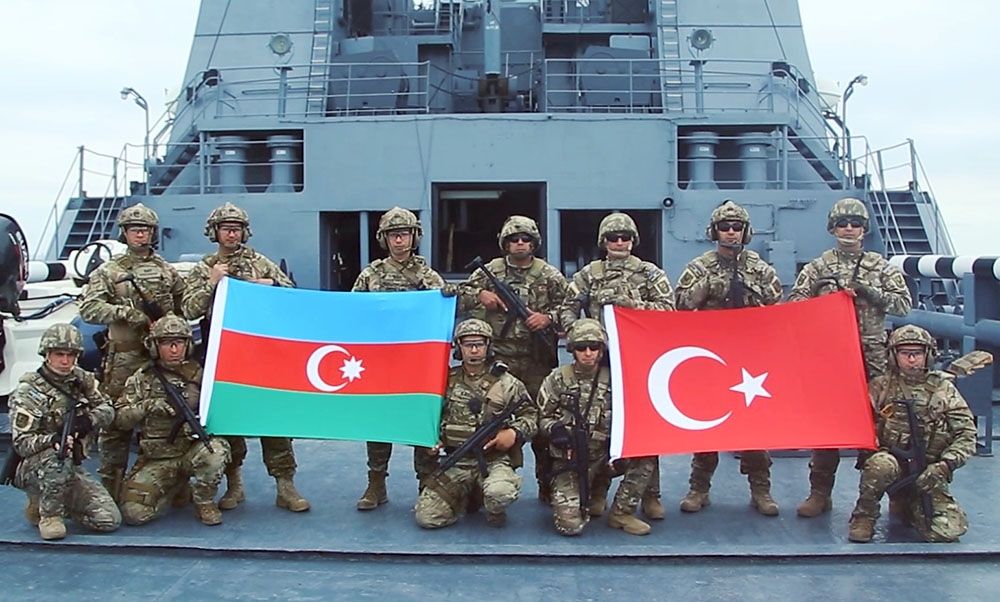 Azerbaijan’s relations with Iran, its large neighbor to the south, have been in flux since the end of last year’s war with Armenia. The most recent rocky period started when Azerbaijan began charging fees to Iranian trucks on a road through southern Armenia that passes through slices of Azerbaijani territory in some places.

At first, Iran remained silent even after Azerbaijani police and customs confirmed the practice. Armenian media reported that some of the trucks targeted had been “transporting cement to Yerevan and Stepanakert,” the de facto capital of Nagorno-Karabakh. The territory is internationally recognized as Azerbaijani but had been controlled by Armenian forces since the first war between the two sides in the 1990s.

The drivers had been detained because they “entered Azerbaijan illegally from Armenia and relevant measures will be taken,” spokesperson of the Ministry of Interior Affairs of Azerbaijan Ehsan Zahidov confirmed the following day. Azerbaijan has long held that entry into Karabakh via Armenia amounts to an illegal border crossing.

Iran’s foreign ministry responded by demanding the release of the drivers and to meet with Azerbaijani officials to resolve the issue.

A series of meetings have taken place since then but the fate of the drivers is still unknown.

Iran’s ambassador to Azerbaijan, Abbas Mousavi, met with Hikmet Hajiyev, the senior foreign policy adviser to Azerbaijan President Ilham Aliyev, twice in a week. In a tweet, Mousavi said the two “reviewed the current situation and the future of our good relations and other issues of interest.”

On September 23, Azerbaijan’s Foreign Minister Jeyhun Bayramov met with his Iranian counterpart Hossein Amir-Abdollahian on the sidelines of the United Nations General Assembly. In a statement, the Azerbaijani MFA noted that the ministers reviewed the “current situation in the region.” Amir-Abdollahian, in his own comments, alluded to “third parties” coming between Iran and Azerbaijan, which in Iran was interpreted as a reference to Israel, Iran’s archenemy, which has a warm relationship with Baku.

Tension has been exacerbated by naval military exercises conducted jointly by Turkey and Azerbaijan in the Caspian Sea. Iran’s foreign ministry said that the drills violated an international convention banning foreign military forces from the sea. (Azerbaijani analysts retorted that Iran is the only Caspian littoral country not to have ratified the convention.) Iran then held its own military drills close to its border with Azerbaijan.

Meanwhile, in Iran a variety of officials have been heaping abuse on Azerbaijan. One Iranian member of parliament, Ahmad Naderi said on Twitter that Azerbaijani officials have “gotten carried away” and have been making statements that are “bigger than their size and capacity,” the Tehran Times reported.

Another MP, Mohammad Reza Ahmadi Sangari, said that Baku had become arrogant because of its military victory over Armenia, which he said was the result of “Turkish doping,” referring to Ankara’s heavy support of Azerbaijan. “The age of your small country is less than that of our youngest lawmaker,” Sangari added.

In Baku, however, analysts say the government appears to be motivated by long-running irritation at Iranian trucks supplying Nagorno-Karabakh.

Following Azerbaijan’s gaining control of some stretches of the road, which connects the key southern Armenian cities of Goris and Kapan and which is Armenia’s only highway to Iran, Baku has been able to act on those Iranian deliveries.

The war also resulted in Azerbaijan regaining territory very close to the Lachin corridor, the road that connects Armenia to Nagorno-Karabakh. That has allowed Azerbaijan to surveil the road for what it sees as illegal border crossings. President Aliyev, in a September 27 interview with Turkish media, said that in the period between August 11 and September 11 Baku had counted 60 Iranian trucks using the road. Some of them, he said, appeared to be trying to hide their identity by using Armenian license plates.

He also said Iranian officials had repeatedly refused to act. "The first time [the Azerbaijani side issued] a verbal warning, the second, an official note, and the third, posts - customs, border, police. In this way we have begun to control the road through Azerbaijani territory," Aliyev said. As a result, he said, the number of Iranian trucks passing through Lachin has "dropped to zero."

While much of the Azerbaijani media coverage of the spat has emphasized a widespread belief that Iran is on Armenia’s side in the conflict, that is a misunderstanding, said political analyst Eldar Mamedov.

Iran has in fact “repeatedly supported Azerbaijan’s territorial integrity on the level of political and religious leadership,” Mamedov told Eurasianet

“When people in Baku accuse Iran of a pro-Armenian stance, they need to be reminded of the big picture: for example, Baku's close relationship with Israel, or the persistence of the idea of ‘southern Azerbaijan’ that supposedly has to be "liberated" from Iran,” said Mamedov, referring to the northern part of Iran that is largely populated by ethnic Azerbaijanis.

As for the most recent tensions between the two countries, Mamedov suggests they will not fundamentally change the relationship.

“Iran is treading carefully in the Caucasus,” he said. “It does not need destabilization of the northern border, in addition to all the challenges it already has in other scenarios like the Persian Gulf, Iraq, and Afghanistan.”