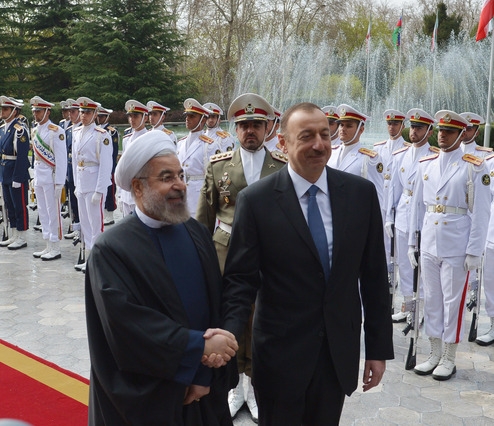 Tensions between Azerbaijan and Iran have been tense over the past few months, with border skirmishes, Tehran accusing Baku of being in cahoots with Israel and Baku claiming to break up Tehran-linked terror plots. In spite of this rocky patch, top Azerbaijani officials have visited Tehran, with President Ilham Aliyev meeting with Supreme Leader Ayatollah Khamenei and Azerbaijan's Defense Minister Zakir Hasanov meeting with top Iranian military officials.

Aliyev's visit "created an opportunity for rapid development of relations between the two countries in various spheres," said General Hassan Firuzabadi, chief of staff of Iran's armed forces. Firuzabadi also reportedly said that "We have today discussed the issues on organization of military trainings, friendly meetings, provision of techniques and weapons for the Azerbaijani Army."

Hasanov, for his part, reiterated Baku's promise that it would not allow any other country (read: Israel) to attack Iran from its territory.

Iran's president is apparently planning a trip to Baku in the next month. The visits are part of a general pivot toward Central Asia, said the Iranian Fars News Agency. "Iran has recently enhanced efforts to boost political, economic and cultural ties and cooperation with the regional and neighboring countries, specially the Central Asian states."

From Azerbaijan's perspective, it seems that Baku realized that it couldn't have as many hostile neighbors as it had been collecting, said Alex Vatanka, an expert on Iran's relations with the former Soviet Union at the Middle East Institute. "I see this as a reaction to both US-Iran detente (which Baku does not really seem to understand or like but has to include in its calculations) and the Russian annexation of Crimea," he told The Bug Pit. "Azerbaijan cannot keep open up two hostile fronts (Russia and Iran) while still totally unsure about Obama's commitment to getting involved in the South Caucasus should Putin decide to repeat the Crimea precedent in Azerbaijan's region (in this case by strengthening its ties to Armenia even more). I don't see these Azerbaijani visits to Tehran as turning a page in relations but Baku hedging its bets in very volatile days."

Meanwhile, Iran announced that it would launch its first naval destroyer in the Caspian some time in the next year. If that news sounds familiar, its because last March Iran held a big ceremony celebrating the launch of its first destroyer into the Caspian. The ships appear to be the same (also, confusingly, called by two separate names, Damavand and Jamaran-2). Anyway, whatever exactly is happening the announcement is another reminder that naval militarization in the Caspian, one of the drivers of tension between Iran and Azerbaijan, continues apace.