Officials in Karabakh are remaining tight-lipped about Iranian fuel imports, and say that Baku is using the issue as a pretext to drive out the region’s Armenian population. 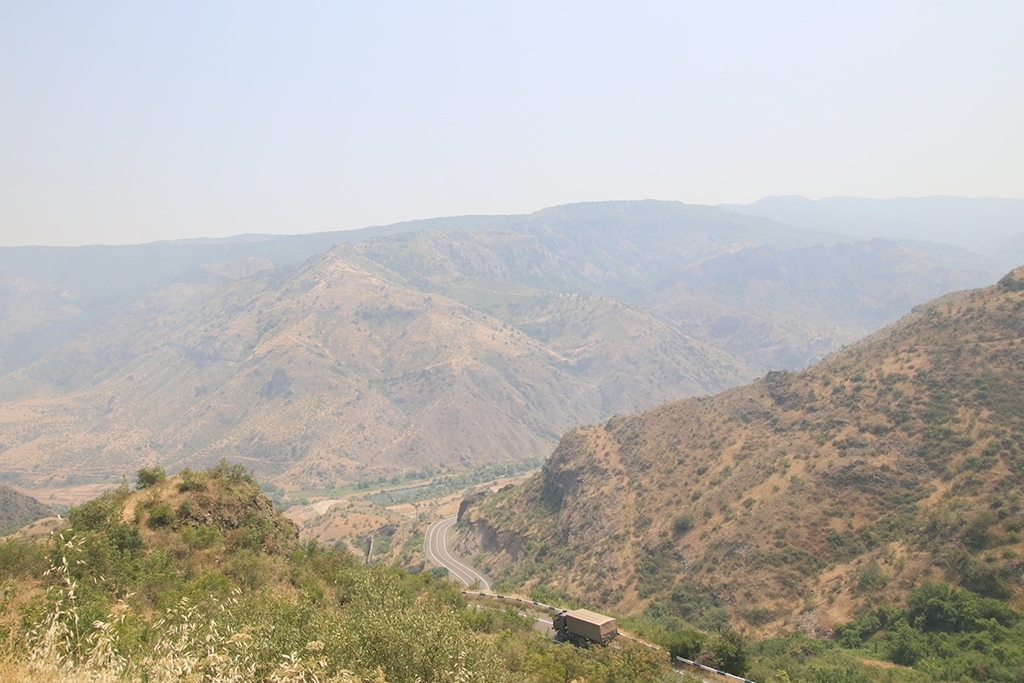 Trucks travel along a slice of Azerbaijani territory on the road that connects Iran with Nagorno-Karabakh. (photo: Joshua Kucera)

In mid-September, Azerbaijani border guards detained two Iranian truck drivers on the road connecting the southern Armenian cities of Goris and Kapan. The arrests spiraled into a deep crisis between Baku and Tehran, including demonstrative military exercises and unprecedentedly aggressive rhetoric from both sides.

The saber rattling also had the unintended effect of spotlighting Iran’s energy exports to Nagorno-Karabakh. The two drivers were arrested on charges of illegally crossing Azerbaijan’s border, as they were reportedly delivering bitumen to Nagorno-Karabakh.

Iranian supplies of fuel and other goods to Nagorno-Karabakh have long been a thorn in Baku’s side, as it considers entry into the Armenian-administered territory to be a violation of its border.

Ultimately, Iran’s Roads and Transportation Agency issued a ban on the country’s trucks traveling to Nagorno-Karabakh.

But officials and businesspeople in Karabakh are loath to talk about the Iranian trade.

The isolated enclave gets all of its energy supplies, in the form of natural gas, from neighboring Armenia. Channeled through a single pipeline that runs parallel to the Lachin Corridor, the road that connects Armenia with Karabakh, the latter imports over 50 million cubic meters of gas per year for commercial, industrial and household use, according to Karabakh’s Ministry of ​​Territorial Administration and Infrastructure.

The security of the pipeline – parts of which now traverse Azerbaijani-controlled territories since the transfer of some land as a result of the ceasefire that ended the war – is guaranteed by the Russian peacekeeping forces. In December 2020, a month after the war ended, the peacekeepers reported that they had helped restore over 10 kilometers of the pipeline near the village of Lisagor; they also have demined the territory around the pipeline.

Most of the gas in that pipeline comes from Russia.

“Because a monopoly 90 percent of the gas supplied to Armenia comes from Russia, so is the gas that is transported to Karabakh,” the head of the central dispatching service of Gazprom Armenia, Artur Karakhanyan, told Eurasianet.

The rest of the gas supplied to Armenia – 365 million cubic meters of the total 2.5 billion imported in 2020 – comes from Iran, via the 194-kilometer Iran-Armenia gas pipeline. (The Armenian portion of that pipeline also is Russian-owned.) Armenia uses that gas to produce electricity that is then transferred back to Iran in the framework of a 2004 gas-for-electricity agreement between the two countries.

Private trade with Karabakh, however, is another matter.

Oil by-products like petrol, diesel and asphalt for road construction are imported to Karabakh through private companies in Armenia that ship their products with privately operated trucks, de facto Deputy Minister of Territorial Administration and Infrastructure Levon Gabrielyan told Eurasianet.

So far in 2021, the region has sourced over 7 billion Armenian drams ($15.5 million) in petroleum from Armenia, though it is unclear how much is of Iranian origin. Overall, in 2020 Armenia satisfied just under a quarter of all its needs for petrol, diesel and the like through Iran, according to data published by the Armenian State Revenue Committee.

In a recent interview with the Russian news website REGNUM, Karabakh’s de facto Minister of State Artak Beglaryan boasted that the new ban on Iranian trucks entering Karabakh “doesn’t mean that Iranian-made goods cannot be imported by our trading companies.” The minister did not specify what products these businesses were bringing into the region.

None of the Armenian companies that deal in Iranian petroleum in Karabakh agreed to answer questions about trade volumes to the region and the impact of the recent developments on that trade. Echoing the private businesses, a source with the local police who requested anonymity for security purposes told Eurasianet that they hadn’t registered any Iranian oil tankers entering the enclave.

Azerbaijanis claim otherwise. In a September 12 letter to the Russian Defense Ministry and the peacekeeping contingent stationed in Karabakh, Azerbaijan’s Defense Ministry complained about the entry of “legal entities and individuals of other countries and their vehicles” into the territory, which it called “a violation of the laws of our country.” The ministry also claimed that the transit violated the trilateral agreement signed with Russia and Armenia to stop the fighting in November 2020.

President Ilham Aliyev later claimed in an interview with the Turkish Anadolu Agency that in a one-month period in August and September, Azerbaijanis had detected 60 Iranian trucks that had “illegally entered Karabakh.”

In an interview with Armenian media, Karabakh’s de facto Minister of Foreign Affairs Davit Babayan said Azerbaijan’s attempts to cut off Iranian trade with Karabakh were motivated by Baku’s policy of “isolation and ethnic cleansing” and intimidating the territory’s Armenian population into leaving.

Meanwhile, Iran has promised to support Armenia’s construction of a new road through southern Armenia, via Tatev and Kapan. The new road will avoid crossing into Azerbaijani territory; the current road now crisscrosses the boundary with Armenia several times, and following the transfer of territories after last year’s war Azerbaijan regained control over some sections of the road. In August it set up checkpoints on the road and started charging border entry fees to Iranian vehicles.