Azerbaijan: Is It Time to Consider Sanctions? 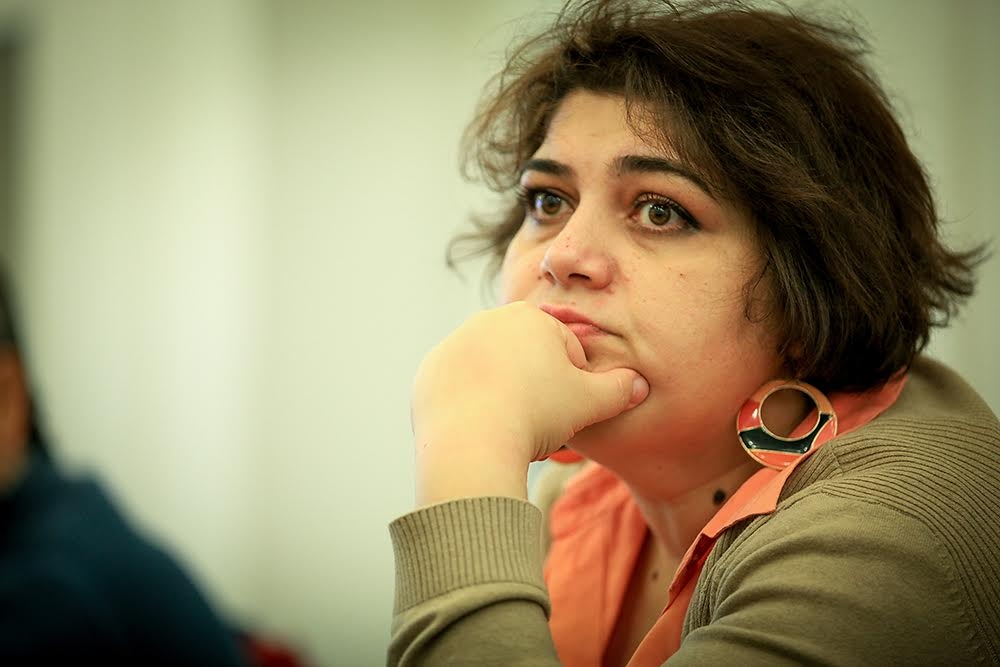 Investigative journalist Khadija Ismayilova was sentenced in Azerbaijan to 7.5 years in prison. US, British and European Union diplomats have publically called for Ismayilova’s release, and have urged Azerbaijani leaders to stop a crackdown on government critics. (Photo: Aziz Karimov)

Some regional experts want the United States and European Union to consider imposing economic and political penalties on Azerbaijan to put pressure on Baku to respect basic individual freedoms.

The sentencing of investigative journalist Khadija Ismayilova to a seven-and-a-half-year prison sentence on September 1 should be seen as a tipping point in relations between the United States and European Union and Azerbaijan, some rights advocates contend. Ismayilova was convicted on criminal charges of embezzlement, abuse of power and illegal business practices. Her supporters contend the case against her was fabricated to stop her investigations into the corrupt practices of top Azerbaijani officials and their family members.

US, British and European Union diplomats have publically called for Ismayilova’s release, and have urged Azerbaijani leaders to halt a crackdown on government critics. Azerbaijan has brushed off such criticism, describing it as an attempt to “politicize” its judiciary and “distort reality.”

Azerbaijan’s Foreign Ministry representatives did not respond to EurasiaNet.org’s request for comment, but in the days following the announcement of Ismayilova’s verdict, officials in Baku called on foreign governments to stop meddling in Azerbaijan’s affairs.

Baku’s response, rights activists say, confirms that quiet diplomacy cannot dissuade Azerbaijani leaders from pressing ahead with a crackdown that already has resulted in the jailing of dozens of individuals as political prisoners, including Ismayilova.

“Given the unprecedented crackdown in Azerbaijan, it should simply be no more business as usual for any of Azerbaijan’s international partners,” said Jane Buchanan, associate director for Europe and Central Asia at Human Rights Watch. “Expressions of concern have no effect. There must be concrete consequences for wrongfully imprisoning Khadija Ismayilova and others.”

She proposed that the EU should freeze negotiations on a strategic partnership agreement with the country, and suspend the voting rights of the Azerbaijani delegation to the Parliamentary Assembly of the Council of Europe, the continent's main human rights body.

“Baku has calculated, so far correctly, that its outrageous behavior comes at no diplomatic or other price,” noted Buchanan.

If the US and EU want Azerbaijan’s government to demonstrate greater tolerance for individual liberties, Western leaders should consider punitive measures, such as the introduction of travel and financial sanctions against Azerbaijani officials responsible for rights violations, said Richard D. Kauzlarich, who served as the US ambassador to Baku from 1994-1997, and who now heads the Center for Energy Science and Policy at George Mason University.

“Without any follow-up, the [Azerbaijani] regime interprets quiet diplomacy and official statements as implicit endorsement,” Kauzlarich said. “The case for sanctions is stronger in the light [of] government-manipulated judicial proceedings that have everything to do with punishing anyone who speaks out and nothing to do with [the] rule of law.”

So far, there are no indications that the US Congress is mulling the potential introduction of targeted sanctions against Azerbaijani officials. The State Department has, however, included Ismayilova on a list of 20 “unjustly” imprisoned women whose cases American diplomats are highlighting.

Two major factors over the last decade-plus have encouraged the West to mute its criticism of Azerbaijani rights practices: one was Azerbaijan’s status as a major exporter of Caspian Basin energy; the other was Baku’s strategic role in assisting the international coalition’s war efforts in Afghanistan, and in containing Iran’s nuclear ambitions. The importance of these factors has diminished significantly since 2014. For example, lower global prices for oil, along with the potential reemergence of Iran as a global supplier, has reduced Azerbaijan’s importance as an exporter in the EU’s eyes. Meanwhile, Ismayilova’s conviction indicates that Baku does not value US ties like it used to, said long-time Caucasus analyst Thomas de Waal.

“Evidently jailing the woman [Ismayilova] who used to be the most prominent journalist for a US-government-funded radio station [RFE/RL] after [US Secretary of State] John Kerry telephoned the president and specifically raised her case last December 21 draws a line under any ideas of ‘strategic partnership’ between Azerbaijan and the United States,” de Waal said.

While old constraints may have eroded, a new geopolitical factor, namely the deepening antagonism between the West and Russia, will likely discourage US and EU diplomats from adopting a significantly tougher stance toward Baku.

Political observers in Baku, hesitant to speak openly out of fear of government retribution, noted that officials could cause a great deal of self-inflicted damage to the Azerbaijani economy by alienating the United States and EU. A deterioration of relations could hamper banking and trade ties at a time when cheaper oil has hit Azerbaijan’s revenues hard and significantly weakened its currency, the manat.

De Waal does not expect any drastic realignment of Azerbaijani alliances. Baku could downgrade ties with the West “issue by issue,” but that does not mean it would realign itself firmly with Moscow.

“I think it [Azerbaijan] is moving more in the direction of Uzbekistan-proud isolation, with certain privileged partners” such as Russia, Turkey and corporate energy partner BP, he wrote in an email.

*This story was updated on September 4, 2015 to clarify Human Rights Watch's comment to EurasiaNet.org about actions toward Azerbaijan.