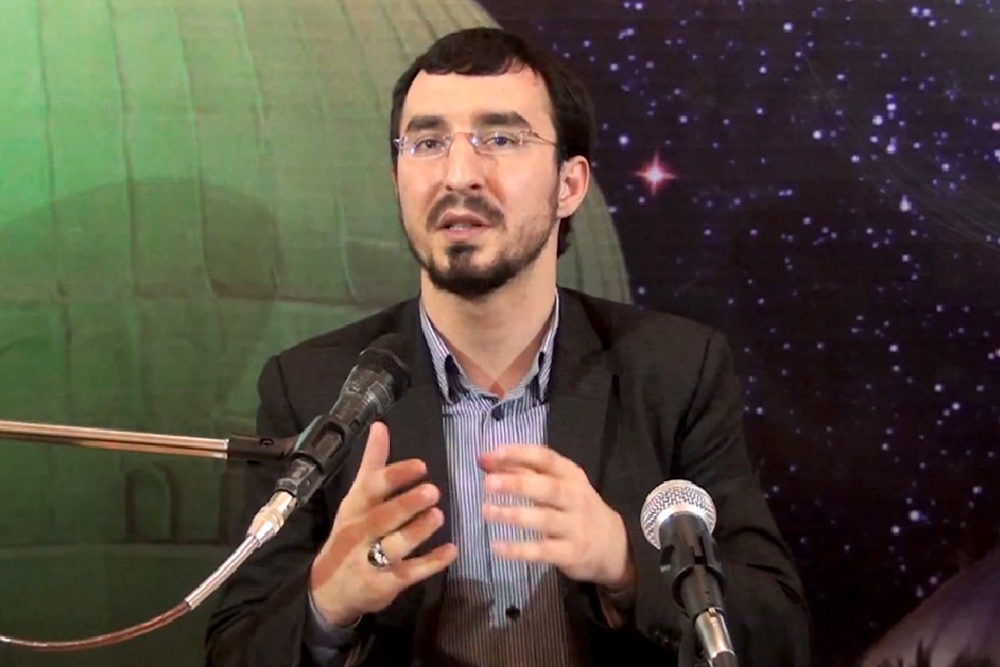 Outspoken Shia cleric Taleh Bagir-zade (also known as Bagirov), who already served a 2.5-year sentence on illegal drug possession charges, was recently arrested again ostensibly for his role in the recent deadly clashes in Nardaran between police and activists of the Muslim Unity Movement of Azerbaijan. The religious scholar and activist was arrested the first time in March 2013, a week after sharply criticized the government in his Friday sermon in a mosque. (Photo: Azadliq Radiosu/RFE/RL)

Bagir-zade was arrested ostensibly for his role in the recent deadly clashes between the police and activists of the Muslim Unity Movement of Azerbaijan – the closest thing the Caspian nation has to an organized “Islamist” opposition.

The Saudi execution of al-Nimr and its aftermath offer Azerbaijani leaders some sobering lessons as they deal with their own “Shia” challenge.

It is not the first time Bagir-zade finds himself in the crosshairs of Azerbaijani authorities – in fact, it was only last July that he was released from prison after serving two-and-a-half-year sentence on what were widely seen as trumped-up drug-related charges. His fiery denunciations of the Aliyev administration were a more likely reason for his imprisonment.

In his willingness to attack entrenched authorities head on, Bagir-zade resembles al-Nimr. Unlike the more politically quietist traditional Shia clergy, such as the Najaf-based Grand Ayatollah Ali Al-Sistani, both Bagir-zade and al-Nimr belong to a politically assertive strand of Shiism in the mold of the Ayatollah Khomeini, the late founder of the Islamic Republic of Iran.

While Bagir-zade, like al-Nimr, opposes authoritarianism, neither of them is a liberal democrat. As a WikiLeaks-summarized conversation in 2008 between a US diplomat and al-Nimr shows, the cleric was supportive of the Iranian system of governance.

Bagir-zade has been more circumspect in his public statements about politics since his release in July. He acknowledges that, at this juncture, Azerbaijan is not ready to become an Islamic republic, but neither did he say he opposed the Iranian system. In fact, he has also publicly noted that Azerbaijan was ruled by Sharia law up until the 19th century, while stopping short of calling for its re-introduction. Overall, the uncompromising tone of his sermons and public statements, including his comparison of President Ilham Aliyev with the late Iraqi dictator Saddam Hussein, leaves little doubt about his position.

If al-Nimr and Bagir-zade have a lot in common in terms of religious-political outlook and style, so do/did their jailers. On the surface, of course, a Wahhabi monarchy like Saudi Arabia and a secular republic like Azerbaijan seem to have little in common. However, similarities abound in the way the leaders of the respective states wield power. Both have a dynastic political structure – officially in Saudi Arabia and de-facto in Azerbaijan. Both deal with dissent rather harshly, although to differing degrees: unlike Saudi Arabia, where beheadings are routine, the death penalty has long since been abolished in Azerbaijan. And since both depend disproportionally on the export of hydrocarbons, collapsing oil prices augur growing fiscal difficulties for Riyadh and Baku. This, in turn, threatens to upset the existing social contracts in Saudi Arabia and Azerbaijan, in which the government provides a modicum of security, stability and prosperity in exchange for obedience. Whatever the official rhetoric, al-Nimr and Bagir-zade are seen as threats not because of their pro-Iranian leanings, but because they have given voice to popular frustrations. They represent a populist challenge to the entrenched elites in Baku and Riyadh. The challenge is particularly dangerous now, at a time when the regimes’ ability to deliver on their end of the social contract is strained.

Saudi Arabia has chosen to deal with the challenge by executing the troublesome cleric and escalating a regional crisis. Riyadh knew full well the kind of outrage the execution of al-Nimr would provoke in Tehran and in Shia communities throughout the Persian Gulf region. Yet Saudi leaders consciously decided to escalate, in part to deflect the attention of Saudis from the looming economic difficulties.

Dwindling financial resources and the lack of international diplomatic and military backing prevent Baku from embarking on a similar path. Two recent developments – the Russia-Turkey feud, and the Iranian-Saudi crisis sparked by al-Nimr’s execution – pose major challenges for Baku, which needs to tread carefully so as not to rile its powerful neighbors at a time when it is feeling economic pain.

Compounding fiscal uncertainty with a diplomatic crisis would be the last thing Azerbaijan needs at this time. Therefore, given the sensitivity shown in Iran to the fate of Shia clerics, authorities in Baku would be wise to approach Bagir-zade in the exact opposite way that the Saudis dealt with al-Nimr. If there are legitimate grounds to prosecute Bagir-zade for a crime, then he should be granted a fair trial. Otherwise, he should be released.

Overall, the fast-developing economic storm that is spreading across Azerbaijan could be a blessing for the Aliyev administration, providing a push for it to address several problem areas. The government could start with implementing long-overdue structural economic reforms, resetting relations with the European Union and the United States, and carrying out a carefully managed political liberalization involving the release of the political prisoners.

If managed skillfully and in the right sequence, such reforms could set Azerbaijan on a more promising trajectory. And, ultimately, such reforms likely would be more effective than outright repression in limiting political influence of such rabble-rousing clerics as Bagir-zade.