Azerbaijan: Is the Kremlin Up to Old Tricks? 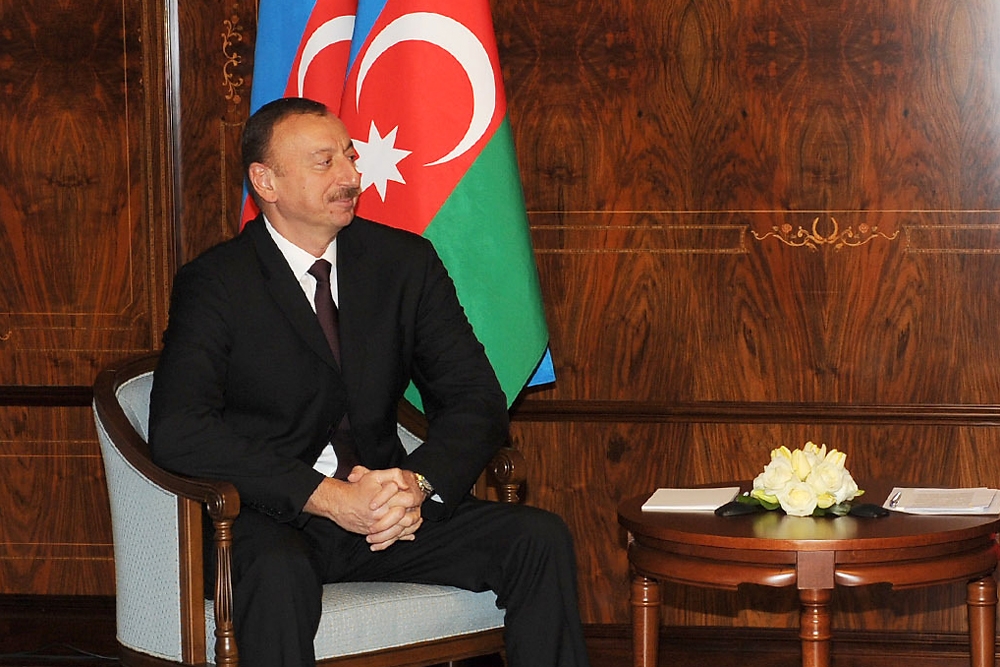 Azerbaijani President Ilham Aliyev, seen here during a January 2012 state visit in Russia, has not yet met with Russian President Vladimir Putin since the latter returned to the presidency in March 2012. Aliyev used to meet with ex-Russian President Dmitry Medvedev at least twice a year. (Photo: Azerbaijan President Press Office)

Russia is rankling President Ilham Aliyev’s administration in Azerbaijan by backing a new lobbying group that is stacked with Diaspora power-brokers. Officials and analysts in Baku believe the Kremlin is trying to find a way to meddle in Azerbaijan’s internal affairs.

The new organization is called the Union of Azerbaijani Organizations of Russia (UAOR). Azerbaijani media outlets have dubbed it the “Billionaires’ Union” because of its membership of fantastically wealthy ethnic Azeris. Among the group’s leaders are prominent property developer/retailer Araz Agalarov, the father of President Ilham Aliyev’s son-in-law, pop singer Emin Agalarov; mogul Telman Ismayilov, owner of the jack-of-all-trades AST Group; Iskender Khalilov, owner of the transportation-hotels-trading-manufacturing company ISR Trans, and Vagit Alekperov, president of the private energy company LUKOIL.

These men, generally seen as friendly to both the Kremlin and President Aliyev, are counter-balanced by a few figures whose loyalties clearly lie with Russian President Vladimir Putin. Ramazan Abdulatipov, a former Russian ambassador to Tajikistan, is an ethnic Dagestani and president of Russia’s Republic of Dagestan, which borders Azerbaijan. Another Kremlin crony is construction-industry tycoon Soyun Sadigov, an ethnic Azeri from Georgia who worked for the KGB in the 1980s. Sadigov also is the former head of the Diaspora organization AzerRos, and a founder of the pro-Putin Russian National Unity Party.

Like a spurned lover, Azerbaijani leaders seem to resent the fact that the UAOR’s founders abandoned the All-Russia-Azerbaijani Congress, an organization seen as reliably under Baku’s thumb, to create this new group. Last October, the State Committee for Work with the Diaspora denounced the UAOR, warning that it could divide Azerbaijan’s Russia-based Diaspora of more than 2 million people.

Government-controlled Azerbaijani media outlets have followed the state committee’s lead, publishing articles that imply the UAOR’s supposed intention is to undermine President Aliyev’s authority. The reasoning holds that only the Kremlin could be capable of getting so many Russia-based billionaires to join such an organization, one editor wrote for 1news.az.

Georgian President Mikheil Saakashvili, no pal of Putin, has become the most prominent figure to assert that Russia has nefarious intentions. He told reporters on February 28 after a trip to Baku that Moscow was conspiring to overthrow the Azerbaijani government, and that it is using Russia’s ethnic Azeris -- namely, Sadigov and LUKOIL boss Alekperov -- to do so.

For many Azerbaijanis, the lack of a public response from Baku to Saakashvili’s remarks brought to mind an old Azeri proverb that “I am telling my daughter to make my daughter-in-law hear it.” In other words, Aliyev wanted to deliver a message to Putin, and used Saakashvili to do it.

The UAOR’s appearance is perhaps not surprising, given that over the past two years relations between Azerbaijan and Russia have deteriorated steadily. Russia opted not to renew its lease on the Gabala radar station and lost its military presence in Azerbaijan. President Aliyev stated that the deal did not suit Baku’s interests.

Aliyev also has stated that Baku has no interest in joining the Eurasian Economic Union, an organization actively promoted by Putin. Stalemated negotiations between Azerbaijan and Armenia concerning a Nagorno-Karabakh peace settlement -- a process in which Russia, a staunch Armenian ally, is one of the coordinators -- have added to mounting tension.

Aliyev, who in the past would meet with ex-Russian President Dmitry Medvedev at least twice a year, is the only Commonwealth of Independent States member-state leader who has not yet held a sit-down with Putin since the latter returned to the presidency in 2012.

Many Baku-based analysts dispute the notion that UAOR is a “Kremlin project” designed to topple Aliyev. “Of course, the Russian government could show some interest in it, which is natural,” political analyst Rasim Agayev said. “But saying that the Kremlin is taking steps against the Azerbaijani authorities is not serious.”

Vafa Guluzade, a former senior foreign policy aide to the late President Heydar Aliyev, added that the Kremlin could have created UAOR to pressure Baku, but not with any immediate goal in mind. “I see it as one of the forms of pressure against and intimidation of the Azerbaijani government, which could be used when Putin needs it,” Guluzade said.

MP Asim Mollazade, leader of the pro-government Democratic Reforms Party, also believes that Russia is using “soft power,” via media, parties and non-governmental organizations, to pressure both Baku and Tbilisi into toeing the Kremlin’s line, especially in the energy sphere. Moscow is desperate to retain a dominating position concerning natural gas supplies to Europe.

“I don’t think that Russia has clear plans concerning a coup in Azerbaijan, but after the agreement [with Turkey] about the construction of the Trans-Anatolian gas pipeline … was signed, the situation in the region is close to what it was when the Baku-Tbilisi-Ceyhan oil pipeline was under construction,” Mollazade commented to News.az.

Screenwriter Rustam Ibrahimbekov (his most prominent credit is “Burnt by the Sun”) is another member of UAOR. He maintains that the group has no particular loyalty to either Moscow or Baku, and he expressed surprise over Baku’s shrill official reaction.

The UAOR’s billionaires did not consider it necessary to “ask for the permission of the Azerbaijani authorities to create something, since they are citizens of Russia,” Ibrahimbekov told EurasiaNet.org. Baku’s reaction is “strange,” he added.

“It is not a Kremlin project and it is not against Ilham Aliyev,” Ibrahimbekov underlined. In comments to the Turan News Agency late last year, he specifically sought to dispel notions of a “Georgian scenario” playing out in Baku. He was referring to the October parliamentary election victory of a coalition led by Bidzina Ivanishvili, a billionaire who returned from Russia to challenge Saakashvili’s United National Movement. The UAOR does not contain anyone who could become an “Azerbaijani Ivanishvili,” Ibrahimbekov insisted.

Analyst Agayev believes that the “hysterical” debate about the UAOR in government-controlled media simply reflects “authorities’ desire to have total control over everything, even outside of Azerbaijan.”