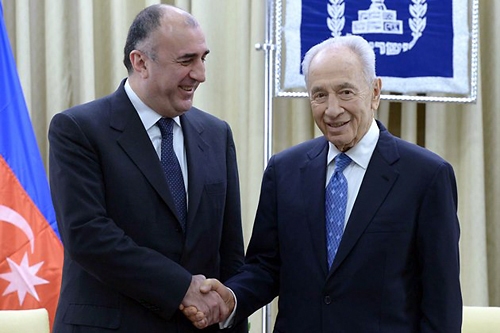 Azerbaijan in late April crossed a self-imposed “red line” in its relations with southern neighbor Iran by dispatching Foreign Minister Elmar Mammadyarov on a visit to Israel, Tehran’s arch-foe. Reasons for the timing of the move are not clear, but, so far, Tehran appears to be biding its time with a response. While Israel and Azerbaijan – like Iran, a majority Shi’a Muslim country -- have maintained strong diplomatic, economic and military ties for years, Mammadyarov’s April 21-24 trip was the first time an Azerbaijani cabinet member had made such a high-profile visit to Tel Aviv. With one eye seemingly on Iran, the Azerbaijani Foreign Ministry avoided attaching the word “official” to the visit. Instead, it cast the ministerial mission as undertaken within the context of Azerbaijan’s status as a non-permanent member of the United Nations Security Council. Even so, the trip had all the markings of an official visit. No documents were signed, but Mammadyarov met with Israeli President Shimon Peres, Prime Minister Benjamin Netanyahu and Defense Minister Moshe Yaalon, among other senior officials. A statement that Baku would consider opening an embassy in Israel concluded the mission. “It is a matter of time,” Mammadyarov said at an April 26 news conference in Baku. A few days later, it was time to offer explanations to Iran. On April 29, Azerbaijani National Security Council Secretary Ramiz Mehdiyev, who doubles as President Ilham Aliyev’s influential administration chief, flew to Tehran to meet with Iranian President Mahmud Ahmadinejad and other senior Iranian officials. Although the government did not specify the agenda, many Azerbaijanis believe the trip was taken to sooth an angry Tehran. “Mehdiyev went to assure Iran that Baku is not going to host Israeli military bases or provide its territory for attacks on Iran” in connection with the international campaign to stop Iranian development of a nuclear weapon, commented Baku-based political analyst Zardusht Alizade, a Middle-East specialist. Reports in American news media outlets in 2012 made just that assertion, though they could not be confirmed. Relations between Iran and Azerbaijan have never been rosy, but Baku previously has been careful not to push its powerful neighbor’s patience to the breaking point. At least since the administration of the late President Heydar Aliyev (1993-2003), for instance, Tehran’s enmity toward the Israeli government fostered an unofficial taboo on Azerbaijani officials visiting Israel. Against that backdrop, Vafa Guladze, a former presidential foreign-policy adviser, deemed Mammadyarov’s excursion “revolutionary,” the Turan news agency reported. A reason why Baku would want to take a “revolutionary” step at this time remains unclear. Some speculate that an Iranian call for the annexation of Azerbaijan, once under Persian control, raised Baku’s ire. Alizade, though, believes that the visit to Israel has been in the works for a long time. “Relations in economic, military and diplomatic areas are so broad and have reached such a high level that it is time for actions,” he said. Azerbaijan supplies up to 40 percent of Israel’s oil needs, or about 21.7 million barrels, according to official data; foreign trade turnover between the two countries stands at $4 billion. The countries also are actively cooperating on weaponry and in other military-equipment areas. In 2012, Azerbaijan bought $1.6 billion worth of Israeli arms. Israeli defense firms also are advising the Azerbaijani defense-industry ministry on an Azerbaijani-made weapon. Conceivably with those activities in mind, Mammadyarov emphasized during his talks with Israeli President Peres that Baku has no interest in the use of Azerbaijani territory “for military actions against Iran,” The Jerusalem Post reported. Baku also subsequently announced that, in conjunction with the Organization for Islamic Cooperation, it will host in June an international donor conference for the Palestinian territories, whose statehood Iran aggressively supports. Referring to Iran as “the greatest threat to the region,” Peres did not hide that the Islamic Republic had been among the topics on the table with Mammadyarov. If Tehran had been looking for an opportunity to smack Azerbaijan down to size, it has not taken it yet: Iranian officials have not reacted publicly to Mammadyarov’s Israel trip. How Mehdiyev described Mammadyarov’s trip to his Iranian hosts also is unknown, although Iran’s state-run IRNA news agency reported that Ahmadinejad blamed “Zionist and US intelligenc[e]” for “trying to weaken our relations.” Playing to his Iranian audience, the Azerbaijani national security chief blamed the West for “taking some steps which violate peace and stability in Azerbaijan,” IRNA reported – an apparent reference to a series of unsanctioned anti-government protests earlier this year. With the Azerbaijani courtesy call over, Baku analysts do not expect more to come from Tehran about Mammadyarov’s Israeli visit. Distracted by other concerns, Iran would gain little by pushing back against Azerbaijan, they believe. “Relations between Baku and Tehran are already very bad. I do not think that visit to Israel will bring any real changes,” Rauf Mirkadirov, a political columnist for the Russian-language Zerkalo newspaper, commented to the Vesti.az news portal. “They do not have any options,” agreed Alizade, in reference to Iran. “What can they do?”