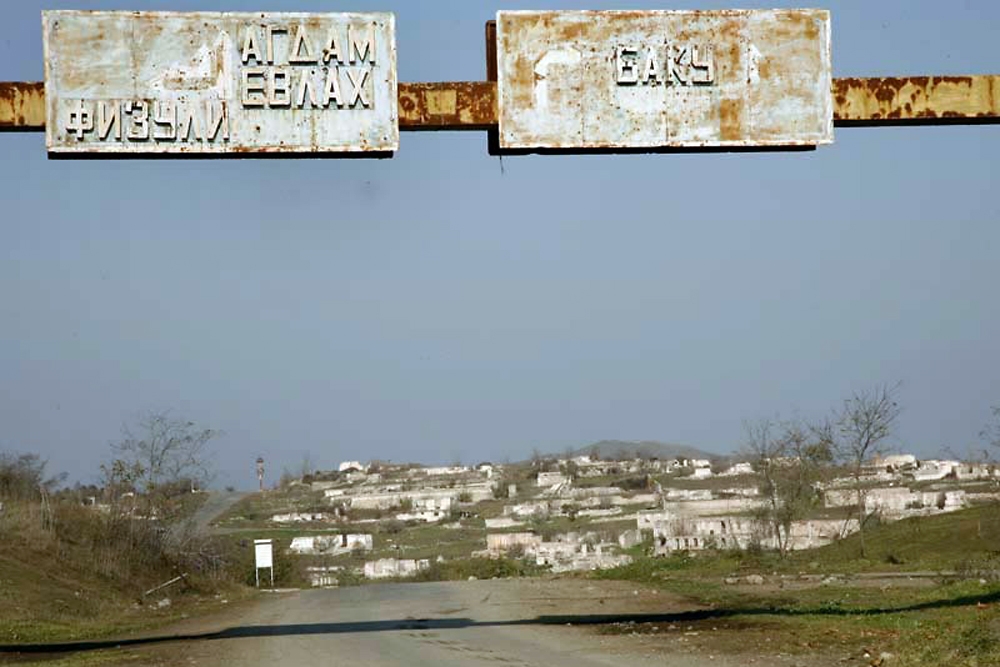 A rusting sign with directions to Baku and Agdam hangs over a road leading to the abandoned city of Fizuli, currently under control of the separatist region of Nagorno-Karabakh. Tension at the front-line in Nagorno-Karabakh and the Azerbaijani-Armenian border has seriously escalated in late July with daily reports of fierce fighting. (Photo: Justyna Mielnikiewicz)

Highlighting the challenge of forging a lasting political settlement to the 26-year-long conflict between Azerbaijan and Armenia over Nagorno-Karabakh, officials and experts in the two countries are offering starkly different views on the heavy fighting that erupted around the territory in late July and early August.

Not surprisingly, everyone is convinced the other side started it. In Armenia, observers believe that Baku’s frustration with the stalled Karabakh peace process boiled over, prompting the Azerbaijani military to launch an attack. Azerbaijani analysts scoff at such speculation. “Baku would not start active military actions because, at that particular moment, both President Ilham Aliyev and Defense Minister Zakir Hasanov were on holidays outside of Azerbaijan,” Jasur Sumarinly, the head of the Baku-based Doctrina strategic affairs think tank, told EurasiaNet.org.

An opinion shared by many in Baku is that Armenia, Russia’s strategic ally in the Caucasus, started the late July clashes at Moscow’s behest in an effort to help reset the Kremlin’s international image. Russian leader Vladimir Putin is now widely regarded in the West as a mischief-maker and bully, and is now eager to change that perception, the thinking in Baku goes.

Vafa Guluzade, a foreign affairs commentator and a former policy advisor to former president Heydar Aliyev, said the flare-up in Nagorno-Karabakh was directly related to Russia’s predicament in the Ukrainian crisis, in which pro-Russian separatists are losing ground, and Western sanctions on Russia are beginning to bite. Putin, Guluzade added, used Armenia to stir the Karabakh pot in order to then intervene in an effort to boost his credentials as a statesman.

Other analysts believe Russia is also trying to compel Azerbaijan to join the Kremlin-led Customs Union, an economic entity that Azerbaijani officials have thus far shown no interest in joining.

“The Kremlin wants Yerevan to play a role in having Azerbaijan in the [Customs] Union. The escalation [of tension] at the front, the death of Azerbaijani soldiers and the [summit] meeting in Sochi is part of one scenario,” suggested Arastun Orujlu, who heads the East-West think tank in Baku.

Guluzade and Orujlu indicated that it is highly unlikely that the Aliyev administration’s aversion to Customs Union membership will change in the foreseeable future. But Orujlu, citing the government’s ongoing crackdown on internal dissent, cautioned that Baku was alienating Western governments, something that could invite Kremlin meddling in the future.

“In the current situation, Baku urgently needs to improve its relations with Western powers. Those ties have been seriously damaged by the recent crackdown on non-governmental organizations and the arrests of civil society activists,” Orujlu said.

Publicly, Azerbaijani government officials have made only vague and non-committal statements concerning Putin’s diplomacy. “We consider the initiative of the Russian president as an effort to restore a ceasefire in the region,” Ali Hasanov, an influential presidential aide, was quoted as saying by the Turan news agency.

A looming challenge for Azerbaijani authorities may be keeping the lid on patriotic fervor. In the wake of the late July/early August clashes, social networks in Azerbaijan buzzed with chest-thumping statements about the country’s martial prowess, and a mass desire of young men to enlist in the army and go fight. Local media outlets also reported that veterans of the 1991-1994 Karabakh conflict expressed readiness to take up arms again. In response, Defense Ministry officials took steps to dampen enthusiasm for mass enlistments. In the aftermath of the August 10 summit, Karabakh has remained quiet, and most experts in Baku do not expect recent events to prompt a resumption of an all-out conflict.

“The big number of citizens’ appeals we consider as a large show of support to the army. We are thankful to [the public] and believe that this patriotic initiative will raise moral spirit of our soldiers,” said a Defense Ministry statement.