The attacks come as Russia, Armenia’s security guarantor, has been getting routed in Ukraine. 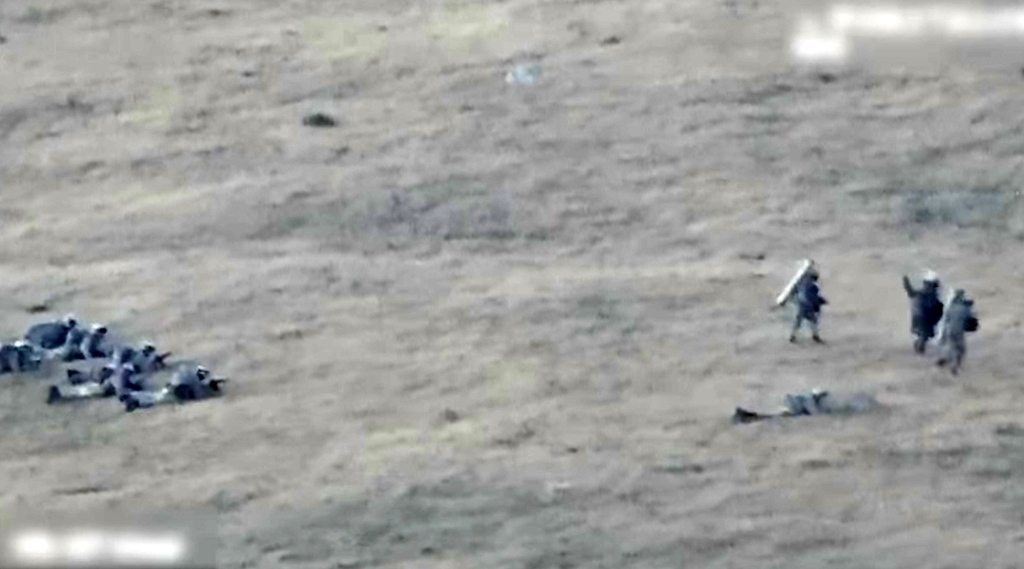 Screenshot of a video released by the Armenian Ministry of Defense of what it says are Azerbaijani soldiers attempting to cross the Armenian border.

Azerbaijan carried out a wide-scale attack against targets in Armenia, an unprecedented escalation of the long-running conflict on to Armenian territory.

Azerbaijan’s defense ministry said it was merely carrying out “local countermeasures” in response to “the large-scale provocation” from Armenia: “News about the invasion of Azerbaijan into the territory of Armenia, disseminated in the Armenian media and the segment of social networks, is nothing but nonsense.”

While Azerbaijan has regularly used military escalation in its conflict with Armenia to achieve diplomatic results, in the past the fighting has been limited almost exclusively to the area in and around Nagorno-Karabakh, internationally recognized as Azerbaijani territory. The expansion into Armenia represents another level of escalation. What remains unclear is whether this is another attempt to achieve diplomatic gains or is the precursor to more military action.

Armenian Prime Minister Nikol Pashinyan, in a morning address to parliament, reported that at least 49 Armenian soldiers had been killed in the attacks. "We have to note that, unfortunately, that number is not final," he said.

Pashinyan spoke with Russian President Vladimir Putin in the morning and asked Moscow for military assistance in accordance with their obligations as members of the Collective Security Treaty Organization (CSTO), a mutual defense pact.

Russia’s Foreign Ministry issued a statement reporting that it had received Armenia’s request for CSTO assistance but gave no indication of what its response might be. It noted that the fighting had stopped under a Russia-brokered ceasefire reached at 10 a.m. Caucasus time, though scattered reports from Armenia throughout the afternoon contradicted that claim.

Russia also maintains a military base in Gyumri, in northwestern Armenia on the Turkish border, with several thousand additional soldiers.

Since the war in Ukraine, there have been signs that Azerbaijan may be probing Russia’s ability and willingness to keep the peace in the region. This escalation comes as Russian troops have been rapidly retreating against a Ukrainian advance.

In the days before the escalation, Azerbaijan had repeatedly reported Armenian violations of the ceasefire, which Armenia had denied. Azerbaijan has also regularly accused Armenia of dragging its feet in implementing various parts of the ceasefire agreement and in proceeding toward a peace agreement to finally resolve their conflict. This month, both countries’ leaders had said that an agreement could come within a matter of months.

Azerbaijan’s statement speculated that Armenia was using the “provocations” to slow down the finalization of infrastructure projects carried out by Azerbaijan in the border areas and “maintain a tense atmosphere” near Azerbaijan's borders.

“One of the main causes of today's clashes between Armenia and Azerbaijan are not only the lack of a peace treaty but also any meaningful progress on several tracks such as [border] delimitation and transport links,” wrote Farid Shafiyev, head of the Azerbaijani state-run Center of Analysis of International Relations, on the center’s Facebook page.

Azerbaijan has not yet reported any casualty numbers.

Some Armenian villages along the border have been evacuated. "The entire village is being bombed, we can't even evacuate the children, we managed to evacuate only part of them,” the former community leader of Geghamasar, a village in Armenia’s Gegharkunik province, told RFE/RL. “The fire is very intense in the area, the roads are also under shelling, we are hiding."

In the village of Sotk, several homes were damaged in the attacks, as was a community hall, community leader Sevak Khachatryan wrote on his Facebook page, saying that the full extent of the damage is unclear.

The United States Assistant Secretary of State for European and Eurasian Affairs Karen Donfried spoke with both Pashinyan and Azerbaijan President Ilham Aliyev. Secretary of State Anthony Blinken issued a statement expressing “deep concern” about the attacks inside Armenia.

Pashinyan also spoke with Iran President Ibrahim Raisi, who reportedly brought Azerbaijan’s intentions for a new transport link connecting Azerbaijan’s exclave of Nakhchivan with the Azerbaijani mainland, a route that Baku calls the “Zangezur corridor.” That route would pass along Armenia’s border with Iran, with uncertain consequences for Armenia-Iran commerce.

“The president of Iran recalled the words of the Supreme Leader of the Islamic Revolution, Ayatollah Khamenei, according to which Iran's connection with Armenia should not be endangered, and the communication channels should be under the sovereignty of the states,” Pashinyan’s press office reported.

Azerbaijan's Defense Minister Zakir Hasanov, meanwhile, held a phone call with his counterpart Hulusi Akar of Turkey, Azerbaijan's closest ally. During the call, Hasanov informed Akar of “Armenian provocations” and that “such steps were prevented.” Turkey and Azerbaijan had been carrying out joint military exercises in Azerbaijan in the days before the escalation; on September 10 Azerbaijan’s MoD reported that the Turkish equipment that had been taking part in the exercises had returned back to Turkey.

Following the attack, some Azerbaijani pro-government sources suggested, in what appeared to be a coordinated information campaign, the creation of a “buffer zone” along Armenia’s border with Azerbaijan. “[E]very last soldier of Armenia should be removed from the territory of Azerbaijan, and a safe zone, so to speak, a ‘buffer zone,’ should be created near the border of Azerbaijan,” according to an analysis in the pro-government report.az.

“[A] safety zone, that is, a 'buffer zone,' must be created,” said military analyst Uzeir Jafarov in a separate piece on Report.az. “Armenia should understand that Azerbaijan will not allow any arbitrariness from now on. I believe that the 'buffer zone' should be created in such a way that Armenia does not pose a threat to Azerbaijan's border guards, soldiers, and military infrastructure.”

This piece has been updated to include more international reaction, and Azerbaijani commentary about a "buffer zone."