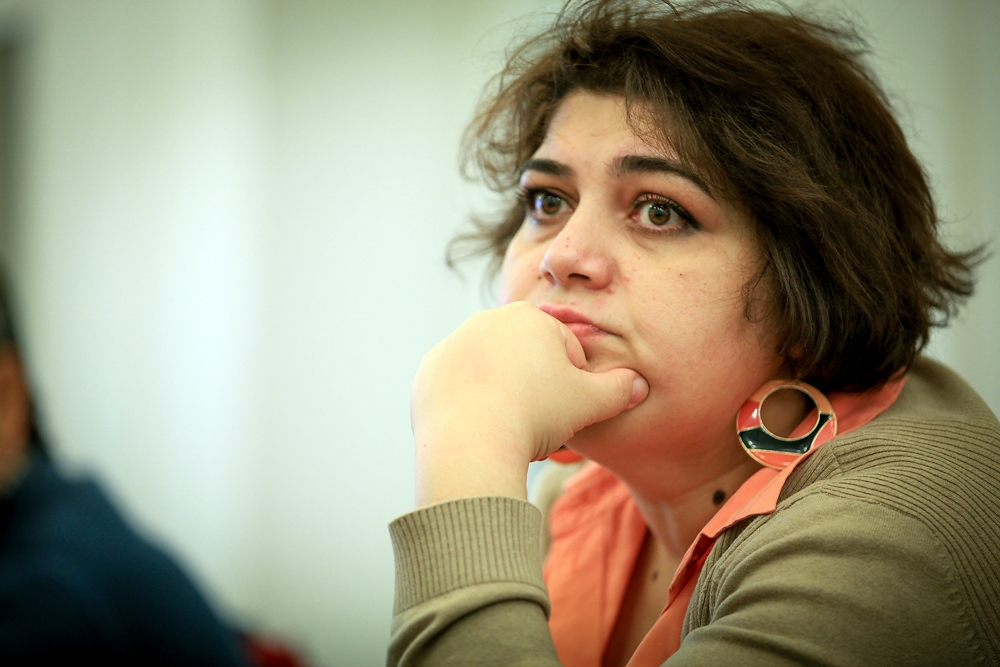 Authorities in Azerbaijan took steps December 5 to muzzle Khadija Ismayilova, an investigative journalist who is the country’s most vocal government critic. A Baku court granted a motion to hold Ismayilova in jail pending a criminal trial, while her Facebook page mysteriously went dark.

Observers say the criminal charges against Ismayilova are politically motivated and her detention is widely seen as connected with an ongoing government crackdown on all forms of dissent. The ruling by the Sabail District court in Baku allows for Ismayilova to be held for two months. In the case, she is accused of goading another journalist to commit suicide.

“The arrest of Ismayilova is nothing but orchestrated intimidation, which is a part of the ongoing campaign aimed at silencing her free and critical voice,” Dunja Mijatović, the OSCE’s Representative on Freedom of the Media, said in a written statement.

On the same day as the court hearing, Ismayilova’s Facebook page was “deactivated.” Friends and colleagues of Ismayilova expressed doubt that she herself would have taken down her Facebook page, which had thousands of followers and is widely seen as one of the most comprehensive sources of news about Azerbaijan from an opposition viewpoint.

On December 4, Mehdiyev, in a lengthy written statement, painted Ismayilova as an enemy of the state, and hinted that she worked in concert with foreign entities to undermine the government. “She puts on anti-Azerbaijani shows, makes absurd statements, openly demonstrates a destructive attitude towards well-known members of the Azerbaijani community, and spreads insulting lies. It is clear this sort of defiance pleases Ms. Ismayilova’s patrons abroad,” wrote Mehdiyev.

In recent years, Ismayilova has worked mainly as a freelance investigative journalist and radio program host for such outlets as Radio Free Europe/Radio Liberty and the Organized Crime and Corruption Reporting Project. She has also written occasionally for EurasiaNet.org.

Ismayilova’s crusading investigative journalism has long taken aim at Aliyev’s administration. In 2012, for example, she documented various corrupt dealings involving top government officials and construction projects connected with Baku’s hosting the Eurovision song contest. Later, Ismayilova asserted she was subjected to a blackmail attempt. According to her, when she refused to cease her investigative activities, her unknown, would-be blackmailers posted an illicitly recorded sex video featuring her on social media.

Ismayilova had long expected that she would one day end up behind bars. In February, she posted instructions on Facebook to her supporters on what to do if she was taken into custody. Addressing international diplomats, she expressed skepticism about the utility of quiet diplomacy. Instead, she urged the diplomatic community in Baku to go public.

“I don't want any private diplomacy for my case. I don't believe in human rights advocacy behind closed doors,” she wrote. “Please [show] support by standing for freedom of speech and freedom of privacy in this country as loudly as possible. Otherwise, I rather prefer you not to act at all.”

She went on to insist that the criminal cases against her are retribution for her journalistic activities. “Anti-corruption investigations are the reason of my arrest,” she wrote in the February posting.

RFE/RL’s chief editor, Nenad Pejic, characterized Ismayilova’s detention as outrageous. “The arrest and detention of Khadija Ismayilova is the latest attempt in a two-year campaign to silence a journalist who has investigated government corruption and human rights abuses in Azerbaijan,” Pejic said in a written statement.

Justin Burke is the Managing Editor of EurasiaNet.