Azerbaijan: Life on the Frontlines 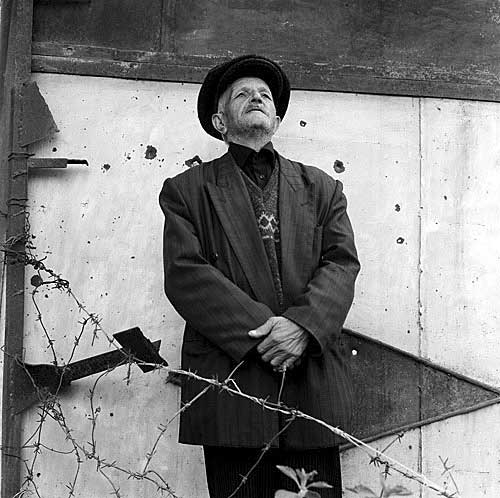 Alish Dadashev, 70, stands by the shrapnel pockmarked gates of a house in Horadiz. The town of Horadiz remains heavily mined and other villages are 500 meters to one kilometer from the frontline. (Rena Effendi for EurasiaNet) 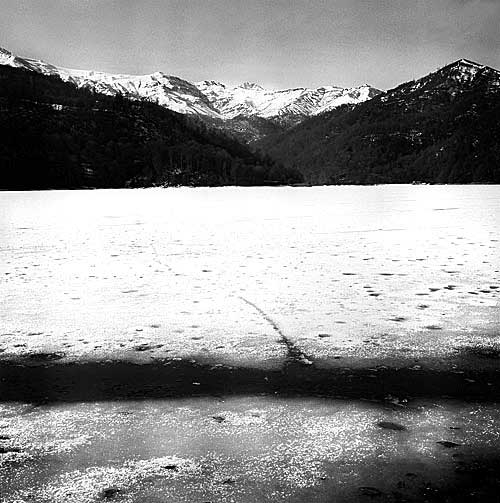 The frozen Goy Gel Lake in Ganja region was once a popular tourist destination during the Soviet era. But due to its proximity to the frontline the lake resort now has been turned into a military base and public access is prohibited. (Rena Effendi for EurasiaNet) 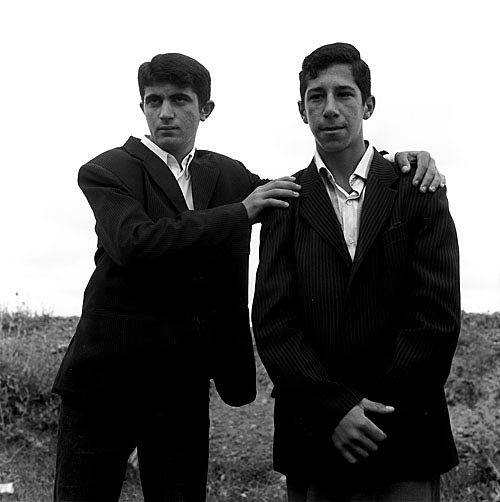 Young boys hang out by the frontline in the village of Mirashalli. At this point Azeri trenches are 10 meters away and the distance between Azeri and Nagorno Karabakh trenches is no more than 30 meters. The area in between is heavily mined. (Rena Effendi for EurasiaNet) 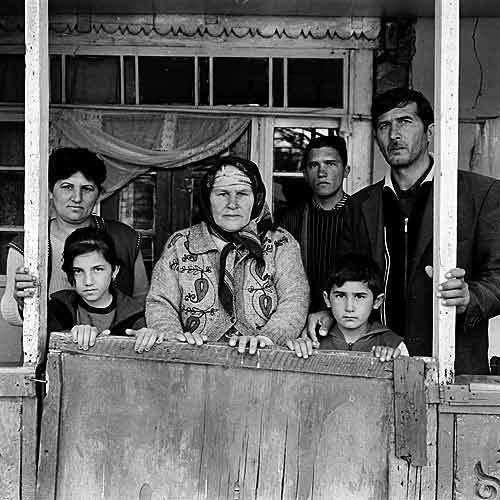 Elnur Ahmedov, 22 (fourth from left), and his family pose in front of his house in Mirashalli. Elnur, who earns money by video recording weddings and birthdays in his village, uses his camera also to record sniper shootings, firefights and other military events that happen in his town. He submits his footage to the Lider TV channel in Baku, but rarely gets paid for what he records. (Rena Effendi for EurasiaNet) 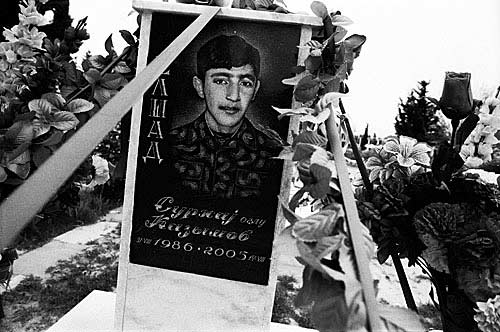 Elshad Kazimov was born in 1986 and died in 2005 of sniper fire along the frontline in the Ganja region. (Rena Effendi for EurasiaNet) 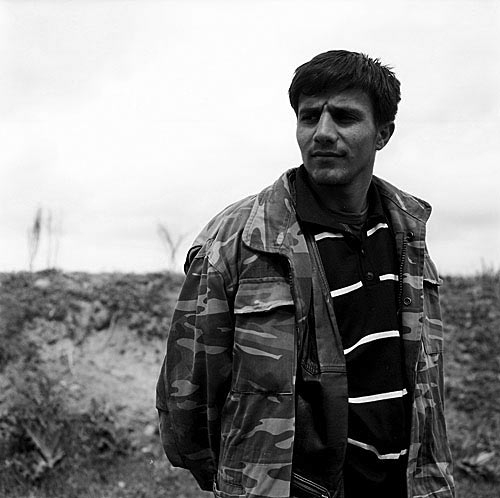 A shepherd in Mirashalli stands 40 meters away from potential sniper fire. Shepherds regularly are injured in mine fields while grazing their sheep. (Rena Effendi for EurasiaNet) 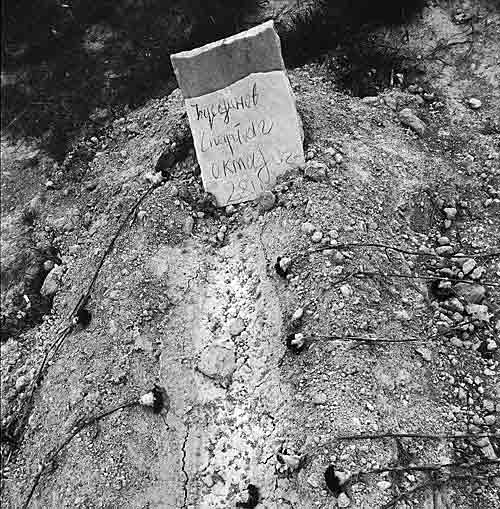 Flowers lie strewn across the new grave of Spartag Husseinov, an Azeri soldier who was recently killed at the frontline. His family has not yet had the time to erect the traditional marble tombstone for his grave. (Rena Effendi for EurasiaNet) 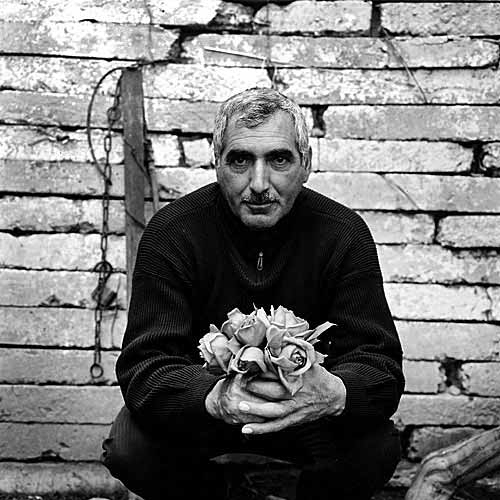 Valeh Shirinov, 53, sits by the reinforced wall of his rose garden in Horadiz. Most houses in Horadiz are reinforced with horizontal cement slabs to obstruct sniper fire. (Rena Effendi for EurasiaNet) 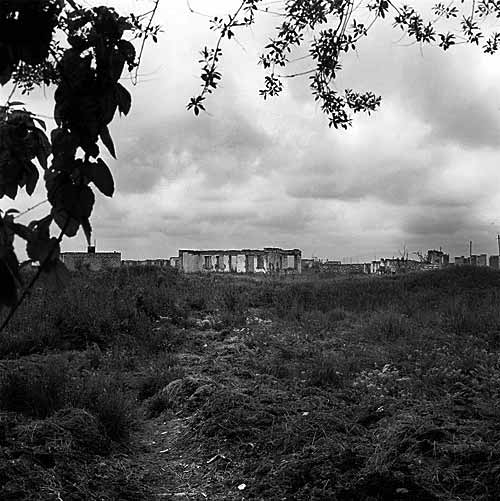 Used by soldiers from Nagorno Karabakh, military trenches under the walls of destroyed houses are 40 meters from the village of Mirashalli. (Rena Effendi for EurasiaNet) 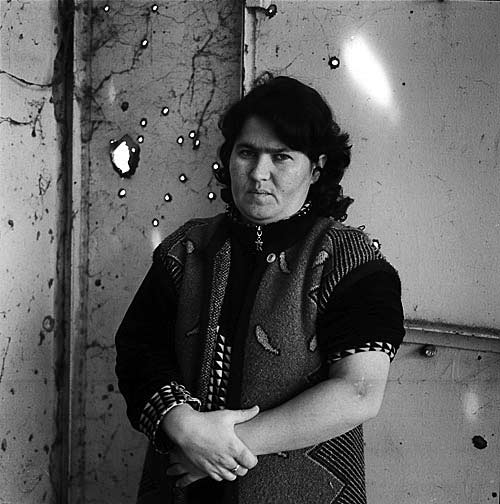 Standing near the shrapnel-damaged gates of her garden in the village of Chirahli, Sabina Shukurova, 34, shows a shrapnel wound in her elbow. Shukurova, who is deaf and mute, lives with her parents in a house 150 meters away from potential sniper fire. The gates of her garden face the frontline. She was wounded while planting vegetables in her garden. (Rena Effendi for EurasiaNet)
prev
next

Thirteen years after the cease-fire agreement that brought an end to fighting between Azerbaijan and Armenia over the breakaway region of Nagorno Karabakh, villagers still living along the Azerbaijani frontline remain trapped in a state of neither peace nor war.

Tens of Azerbaijani villages and settlements, stretching from the southwestern town of Horadiz to the northwestern Terter region, are strung along the roughly 120-kilometer-long frontline that divides Armenian and Azerbaijani forces. According to government statistics, they contain some 150,000 people.

Some, like the village of Chirahli in Agdam region, have become ghost towns; only 10 families are left to occupy the 100 houses still standing there. Still others, battle sites during the last two years of the 1988-1994 war, look as if the fighting ended only yesterday.

But still, their inhabitants stay on. "It is very difficult to live here. No money, no good prospects. But we are keen to stay in the village," said Yashar Ahmedov, a farmer who lives in Mirashalli village on the frontlines in Agdam region, an area mostly controlled by the Armenian army. "If we leave this place then everyone else will go, too. We don't want to give up our lands."

Gunfire and occasional shell explosions are routine for frontline residents, making security their major concern. According to the Azerbaijani Defense Ministry, up to 200 people, many of them civilians, are killed each year from cease-fire violations. Even more, the ministry says, are wounded.

To avoid Armenian sniper fire from a few kilometers away, cab drivers dim their lights at night when driving to Azerbaijani-controlled villages within Agdam region. Further to the south, in villages like Horadiz in Fizuli region, some 150 meters from the frontline, houses are reinforced with horizontal cement slabs and top floor windows are sometimes covered with metal and wood to shield from such attacks.

Some of the worst damage can come from the debris of war itself. According to the Azerbaijan National Agency for Mine Actions (ANAMA), a government body that works to clear Azerbaijan of land mines, approximately 116.8 million square meters of Azerbaijani land are suspected to be mined; another 47.1 million square meters have been identified as still containing unexploded ordnance. Over 80 percent of the 1,953 mine victims in ANAMA's records are civilians living in areas along the cease-fire line.

Economic problems rank a close second to security concerns for frontline residents. Poverty rates in frontline settlements are Azerbaijan's highest. People here mostly get by with odd jobs. Nasimi Mammadov, a 39-year-old resident of Guzanli village in the Agdam region, says that the lack of land reform poses the biggest obstacle for frontline families.

Unlike elsewhere, in frontline areas the government retains ownership of all land and artesian wells for irrigation."[A]grarian reforms here are lagging behind other regions," Mammadov said. "Our farmers cannot take loans from banks because they have no land to put down as collateral."

Meanwhile, the population is growing larger. About 30,000 Internally Displaced Persons (IDPs) from the breakaway region of Nagorno-Karabakh and surrounding occupied regions were recently moved to the frontline Fizuli, Agdam and Terter regions from tent settlements around the country. The IDPs occupy new houses built by the government over the past two years out of proceeds from the State Oil Fund.

"[It] only reinforced the unemployment level," commented Mammadov. "There are not enough jobs, not enough land for ploughing, infrastructure is underdeveloped."

Residents largely depend on the government's monthly IDP aid payouts of 4 manats (about $5) and not having to pay income tax or for utilities.

Access to healthcare adds to the challenges. Some villages do not even have a first aid station. No hospital exists. Sick villagers must be transported long distances over badly damaged roads to medical clinics in regional centers such as Beylagan, Barda or Ganja, depending on the location.

A sense of apathy prevails. Older people who remember pre-war times are becoming fewer and fewer, while many other residents are moving to Baku or elsewhere in the Commonwealth of Independent States.

Yet even in these blighted villages, normal activities can be seen. Children play soccer just a few meters from military trenches. New wedding palaces are being built. The government plans to open a huge sports center in the village of Guzanli.

"Life is continuing," concluded Guzanli resident Mammadov. The frontline residents who remain behind "are somehow adjusting."