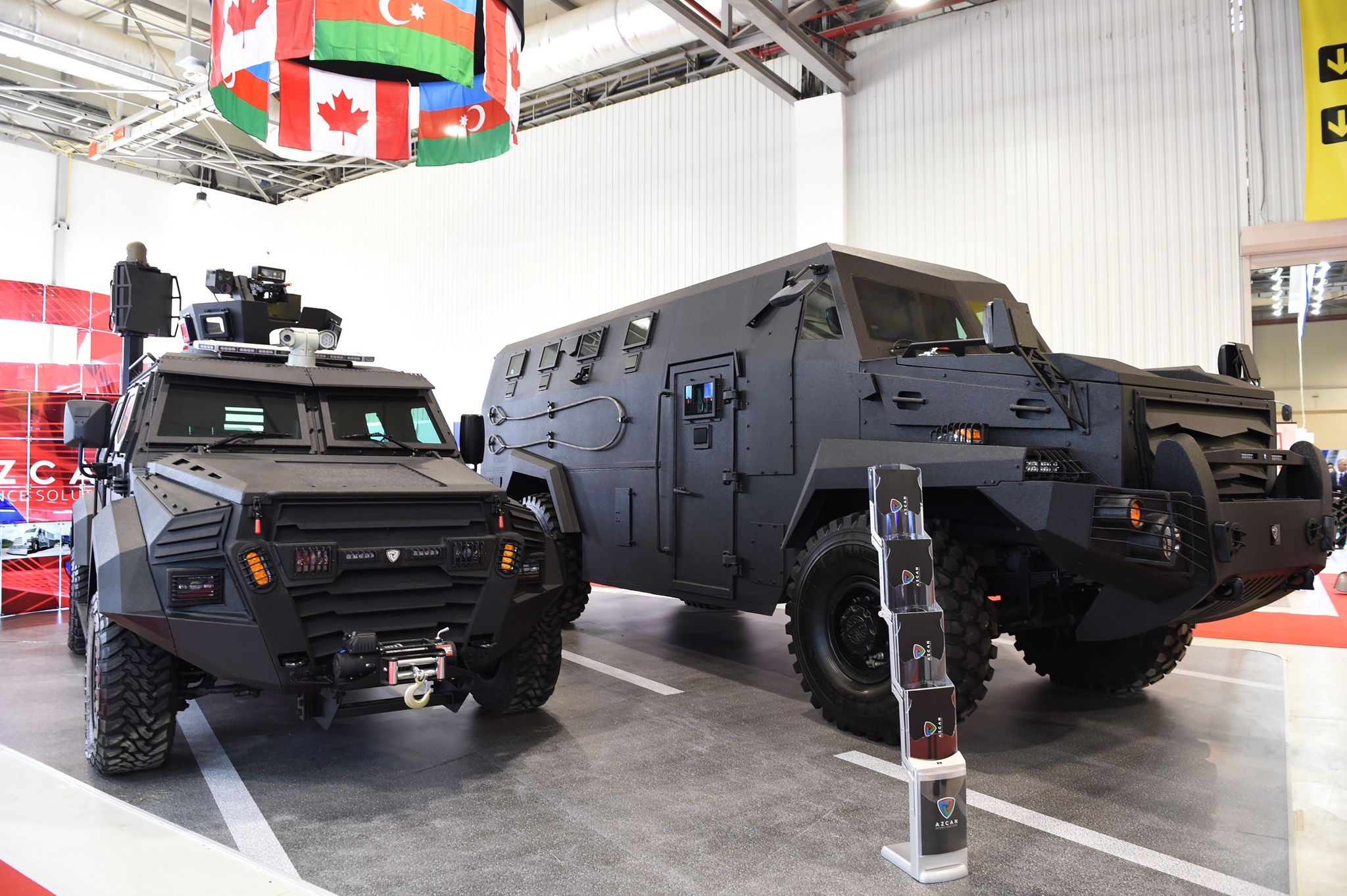 With an array of new, domestically produced weapons, including sniper rifles, machine guns, armed drones, and armored vehicles, Azerbaijan is showcasing its arms industry amid growing tensions with neighboring Armenia.

Much of the attention on Azerbaijan's growing military has focused on the country's weapons purchases from abroad, notably from Russia and Israel. But the country also has been steadily building up its indigenous production capabilities. The new wares were on display at the country's defense exposition, ADEX-2016, at the end of September.

“Today, the Azerbaijani army is one of the strongest armies in the region,” the country's Minister of Defense Industry, Yavar Jamalov, said at the expo's opening. “Today's event is a good example of that.”

It was the second iteration of ADEX, and Azerbaijan’s defense production has expanded significantly since the first expo two years ago: this year’s event featured 260 products, compared with 160 in 2014. There was a heightened sense of anticipation surrounding this year's ADEX due to Armenia's demonstration of powerful, newly acquired Russian Iskander-E missiles during an Independence Day parade just a few days earlier. The Armenian display raised questions about how Baku would respond.

Expectations that Azerbaijan might display domestically produced missiles at ADEX were not met, suggesting that Baku will have to look abroad for a response to counter the Armenian missiles, against which Azerbaijan's current air defense systems are incapable of defending.

Azerbaijan did roll out its first ever armed drone at the show; drones have taken on increasing importance in the conflict with Armenia and featured heavily in their “four-day war” in Nagorno-Karabakh this past April, the sharpest fighting since a ceasefire between the two countries was signed in 1994. Notably, the April fighting saw the first-ever combat use of Azerbaijan's Israeli-made IAI Harop “kamikaze” drones.

At ADEX Azerbaijan demonstrated its domestically produced Zerbe (“Strike”) armed drone. Few of its specifications have been made public, but it appears similar to the Israeli Orbiter 1K, with an armed warhead, stealthy profile, and an endurance of up to three hours. Azerbaijan's Ministry of Defense has ordered more than 100 Zerbe drones, which “have become a nightmare for the Armenian army,” Jamalov said.

Other new weapons demonstrated at ADEX included the NST14.6 sniper rifle, with a range of 1,600 meters and the “Shimshek” (Lightning) machine gun, designed to be installed on tanks and armored personnel carriers. Two new types of armored vehicles were on display, as well: the Azerbaijan-made BRDM-Combat Reconnaissance vehicle equipped with anti-tank missiles, and an armored personnel carrier manufactured by an Azerbaijani-Canadian joint venture.

Azerbaijan has built its arms industry almost from scratch. Azerbaijan played only a minor role in the Soviet defense industry, and even that tiny sector collapsed upon Azerbaijan's gaining independence from the Soviet Union in 1991.

Baku relied mainly on Ukrainian arms during the hot phase of the Karabakh conflict in the early 1990s.

Azerbaijan created a Ministry of Defense Industry in 2005 to oversee domestic arms manufacturing. According to the country's military doctrine, the purpose of the ministry is twofold: first, to respond to “urgent needs for military products on the part of the armed forces,” and second, to produce arms that are “competitive” for export.

The state industry was supported by profits earned from Azerbaijani energy exports, which enabled a rapid increase in the defense budget. Spending on the military grew from $175 million in 2004 to $3.1 billion in 2011. Starting in 2011, the state budget began including a line for “private defense-oriented projects and events,” and from 2011-2015 an additional $6.1 billion was allocated toward that.

While it is widely believed that this budget line is directed toward the Ministry of Defense Industry and buying weapons from abroad, precise details are classified. In the 2016 state budget, this line was removed amid sweeping budget cuts caused by a global collapse in oil prices. Earnings from energy exports are a critical source of government revenue.

The state industry's first major project was the establishment of Azad Systems, a joint venture between Azerbaijan and Israeli drone manufacturer Aeronautics, in 2011. Similar joint ventures were subsequently set up by Azerbaijani and Turkish companies to produce submachine guns, anti-tank missiles, and other weaponry. Joint ventures between Azerbaijan and the South African firm Paramount produce Marauder and Matador mine protected vehicles, as well as implement helicopter modernization and upgrades.

The scale of the domestic defense industry is difficult to assess. Baku has signed cooperation agreements with more than 30 countries, but few production agreements. In June, Jamalov said that to date his ministry has signed contracts worth $106 million “with the countries of Europe, the Americas, Asia and Africa.” According to the ministry, it had 27 products available for export in 2009, 132 in 2011, and 260 in 2016. In terms of domestic use, it is unclear how much of Azerbaijan's armed forces' equipment is domestically produced.

Jamalov said that “a number of local defense products were widely used during the fighting” in April.

Azerbaijan's arms export potential faces significant hurdles. Its main partners are Turkey and Israel, both of which are already strong exporters. It also faces regional competition from Kazakhstan, which has followed a similar strategy of establishing joint ventures with Israeli and Turkish companies, among others. The fact that Azerbaijan's defense products include a mix of Soviet/Russian and NATO standards muddles marketing strategy.

Developing new products in partnership with foreign companies takes several years, however, and it is hard to imagine that Azerbaijan will produce its own ballistic missiles in the near future.

In 2011, Baku reached an agreement with Turkey's Roketsan to produce laser-guided anti-tank missiles. However, the resulting product – the UMTAS anti-tank missile – did not appear until ADEX-2016.

Another possible supplier is France. In 2014, Baku claimed that French officials had lobbied for the purchase of the ASTER 30 SAMP/T mobile anti-aircraft system. France’s Eurosam developed the system with MBDA and Thales; the latter two companies were present at ADEX-2016.

An expert from a government institution who spoke on condition of anonymity argued that “the best solution for protection against Iskander ballistic missiles is the ASTER 30 SAMP/T, which is effective and available for purchase.”

Azerbaijan's options for foreign purchases may be more limited now, given the government’s budget woes. It remains uncertain whether in the current economic climate Baku is ready to purchase French or Israeli air defense systems.

Baku's efforts to obtain arms from other countries also could be complicated by Russian interference. Russia wants to increase its own revenue through arms sales to Azerbaijan, yet it is hard to imagine what Moscow can offer in terms of missile defense against Armenia's Iskander missiles.

Zaur Shiriyev is an Academy Associate at the Royal Institute of International Affairs (Chatham House).