Don’t assume the push is motivated by an environmentalist impulse. 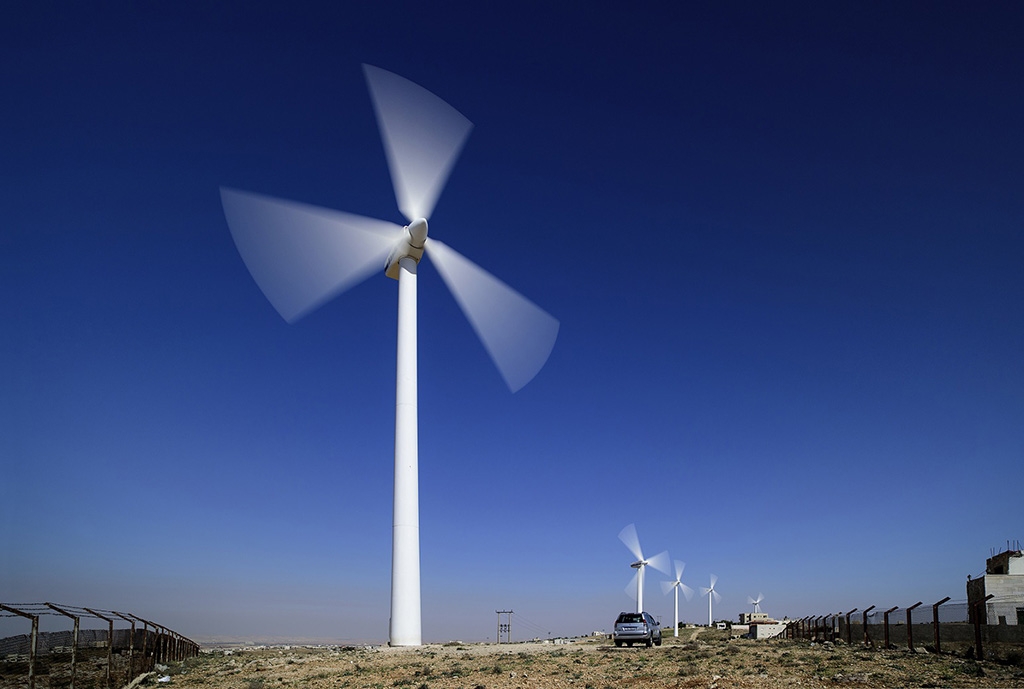 Wind turbines in Jordan built by Saudi Arabia’s ACWA, which is constructing a wind farm on Azerbaijan’s Caspian coast. (ACWA)

In discussions about renewable energy, Azerbaijan is not the first country that springs to mind.

As one of the world's top 25 oil and gas producers, Azerbaijan is better known for its substantial Caspian Sea hydrocarbon reserves and ambitious pipelines shipping oil and natural gas to Russia, Turkey, and Europe.

But Baku now is expanding its ambitions to wind and solar energy, with two new contracts signed this year for large-scale projects costing a total of $400 million.

One of the deals, with Saudi Arabia’s ACWA, is for the construction of a 240-megawatt wind farm in the Khizi and Absheron districts on Azerbaijan’s Caspian Sea coast, the windiest region in the country. A second deal with Masdar, a firm based in Abu Dhabi, is for a 200-megawatt solar plant further south, near Alat.

These are substantial projects, known as “grid scale” in energy parlance. In neighboring Turkey, which has a well-developed wind power sector with about 275 farms, only one of them tops 240 megawatts. Azerbaijan’s solar plant will be the fourth-largest in Europe and the former Soviet Union. In total, the two projects are expected to generate up to 1.4 terawatt hours of power, about 5 percent of Azerbaijan’s current energy needs.

Longer term, the plans are even more ambitious: for renewables to meet 30 percent of the country’s needs by 2030. With help from the European Bank for Reconstruction and Development, Azerbaijan is developing “renewable energy auctions” to support private investment in further renewable energy projects.

Azerbaijan currently has about 6,650 megawatts of generating capacity, and about 92 percent of the country’s energy in 2019 was produced by burning natural gas.

The optimistic estimates for Azerbaijan’s wind and solar potential are backed up by the International Renewable Energy Agency (IRENA) in a November report. "Despite current reliance on oil and gas, the country has excellent wind and solar resources, along with significant prospects for biomass, geothermal and hydropower development," the report said.

Boosting Azerbaijan's renewable energy sector will help the country meet its commitments to reduce greenhouse gases under the 2016 Paris Agreement on climate change, which Baku has both signed and ratified.

But don’t assume that the push for renewables is motivated by an environmentalist impulse.

In recent years, as its domestic energy consumption has increased, Azerbaijan has struggled to meet its obligations on a variety of contracts to export gas westward. To meet those shortfalls, it has had to import natural gas from Russia. Renewables offer a way to keep that from happening again.

The two new wind and solar plants will free up for export about 300 million cubic meters per year of gas that Azerbaijan had been burning for domestic power use, Mammadov said.

"The Azeri authorities are concerned about climate change, and their development of renewables will help reduce CO2 emissions, but their prime incentive for developing wind and solar power is to ensure they can provide energy at home whilst maintaining gas export levels," John Roberts, a regional energy analyst, told Eurasianet.

"There are routine shortages for domestic gas, and because this gas is subsidized – and the Azerbaijani authorities are worried about the social and political consequences if they reduce subsidies too fast – this means they either have to import gas or to find ways of substituting gas consumption at home with renewables," Roberts added.

Azerbaijan is not alone in this strategy; Kazakhstan and Uzbekistan also are seeking to boost renewable energy to increase natural gas exports.

Georgia, meanwhile, is seeking to boost renewable energy to reduce its dependence on the gas it buys from Azerbaijan (and Russia). George Chikovani, the CEO of the Georgian Energy Development Fund, said Georgia plans to have 1,200 megawatts of wind energy capacity and up to 6,000 megawatts of solar capacity by 2030. The country’s first solar plant, with a capacity of 25 megawatts, is expected to begin operations later this year.

Azerbaijan’s renewable push has an unlikely supporter in the UK.

Global Warming Policy Foundation (GWPF) is a body set up by prominent climate change denier and former UK chancellor Lord Nigel Lawson. It challenges the mainstream view that climate change is manmade and opposes government policies to mitigate it. One of its longtime board members, Baroness Emma Nicholson, is the UK’s trade envoy to Azerbaijan, where the energy giant BP is the country’s largest foreign investor and largest producer of natural gas.

But in a February 20 interview with the Azerbaijani news agency Report.az, the baroness expressed London’s willingness to "help maximize Azerbaijan's solar, wind and hydro generation," celebrating the opportunity for "both of our nations to take the necessary measures to address climate change.”