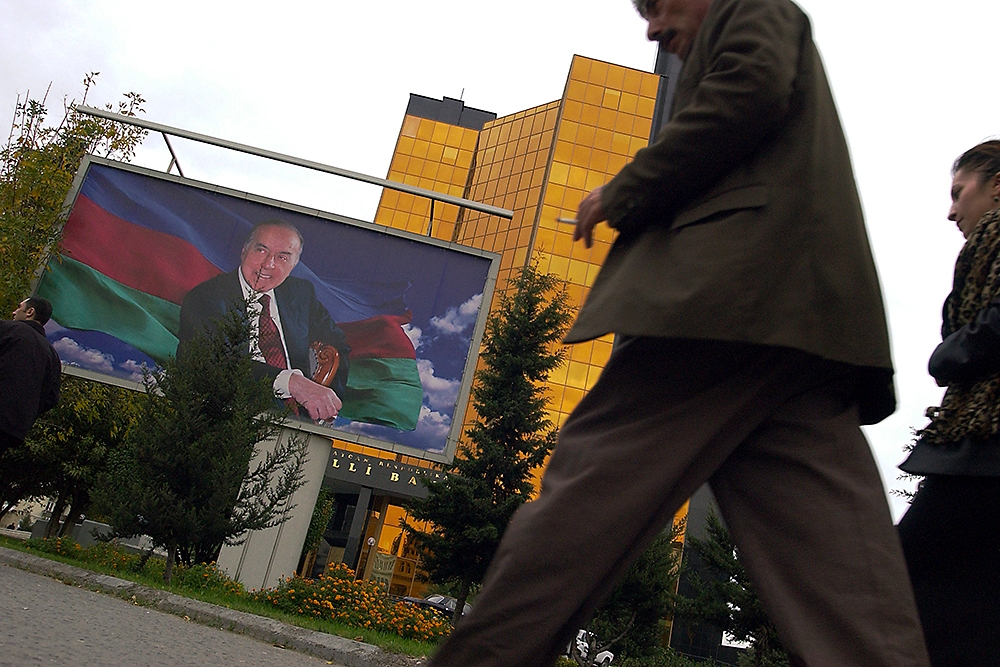 For thousands of Azerbaijanis like 58-year-old high-school teacher Nargiz, the Azerbaijani national currency’s precipitous plunge on February 21 wiped out more than their savings. It popped a bubble of belief that Azerbaijan was protected from the kind of financial instability that has shaken other Eurasian states.

Azerbaijan’s Central Bank on February 21 devalued the manat 33.5 percent against the dollar and 30 percent against the euro. That move cost Nargiz, who would give only her first name, the equivalent of $4,500, a decade’s worth of savings. It also amounts to her official salary for nearly the past three years from a secondary school in the capital, Baku.

“This is a big loss for my family,” she said. “My daughter warned me that this could happen, but I did not listen to her. Now I regret it so much.”

Nargiz could be understood for believing that the manat, and the Azerbaijani economy, would always hold its own. Authorities had offered repeated and plentiful reassurances that all was well. Though oil prices dipped below $50 a barrel in January, President Ilham Aliyev had stressed that the fall had had “no negative impact” on the manat. “On the contrary, the AZN [manat] is even stronger,” Azerbaijani news outlets quoted the president as saying on January 28.

Symbols of a strong manat abound in Baku. Over the past decade, the city, flush with cash, has been transformed by futuristic skyscrapers. It is now in the final stages of sprucing up for this summer’s upcoming European Games, an Olympic-style competition.

While President Aliyev had earlier proclaimed that Azerbaijan possessed plentiful reserves, apparently, the Central Bank decided that enough was enough. The rate has now been set at 1.05 to the dollar and 1.19 to the euro, compared with the rate on February 20 of 0.78 and 0.89 manats, respectively.

The Central Bank claimed that devaluation aims to diversify the economy, strengthen its compatibility with international markets, boost the country’s export potential and avoid running up debt.

To many Azerbaijanis, February 21 has simply become known as “Black Saturday.”

Over the weekend, people swarmed exchange bureaus across the country seeking to buy dollars. The surge prompted some bureaus to stop selling dollars. Some supermarkets in Baku also stopped selling food, as locals, afraid of price-rises, began hoarding. Shopping malls in Baku likewise closed to allow managers to recalculate prices that took into account the manat’s lower value, according to local media reports.

One policy observer, Gubad Ibadoglu, director of the non-governmental Center for Economic Research, said that he expects most food prices to rise sharply as a result of the devaluation. In some Baku markets the price of bread has reportedly doubled. Azerbaijan imports most of its retail food items. Prices for retail goods have already increased well over 30 percent, local media reported.

One 31-year-old Baku clothes shop owner told EurasiaNet.org that he had no choice but to increase prices. “I am sorry I have to do that. I would not have expected such a betrayal from the government,” the retailer, Yavuz, who did not want to give his last name, said, referring to earlier Central Bank statements that the manat’s value would remain steady.

Government officials could not be reached for comment on the Central Bank’s February 21 action.

Some pro-government politicians, repeating the official line about improving exports, downplayed the notion that devaluation is damaging for Azerbaijan’s economy. "There is absolute stability in the country and there is nothing to worry about,” Fazail Agamali, chair of the Ana Vatan (Motherland) Party, told EurasiaNet.org. Claims about the potential for future upheaval “are all made up by people who have an anti-Azerbaijan attitude and want to harm the country's stability.”

On February 21, the Ministry of Economy and Industry’s State Service for Anti-Monopoly Policy and Consumer Protection claimed on its website that it would take “measures,” including “further legal actions,” against those who use devaluation as cover to engage in price-gouging. Ministry officials did not provide criteria for what would constitute profiteering.

There have been reports of scattered demonstrations in regions, including Lenkaran. In Baku, however, many seemed to be keeping their discontent to themselves or venting on social networks. People are well aware that the government has cracked down on any form of criticism over the past year; thus a public display of dissatisfaction over devaluation could easily result in a jail term. A February 22 protest in Baku drew only about 15 actual attendees, even though more than a thousand Facebook users had indicated they would attend.

Some economic experts maintain that the devaluation shock is the result of government mismanagement. Devaluation “proved once again that the country’s economy has been operated by administrative tools, rather than economic means” since Azerbaijan regained its independence in 1991, said Ibadoglu, the policy analyst. Diversification of the economy away from hydrocarbons, which generate the overwhelming majority of Azerbaijan’s revenues, has not occurred.

“The national economy is not capable of regulating itself in a crisis,” he said.
Rather than drastically devaluating the manat against the euro and the dollar in one day, devaluation should have occurred gradually to allow businesses time to adapt, said economist Natig Jafarli, executive secretary of the opposition ReAL movement.

Nargiz Rashid is the pseudonym of a freelancer reporter focusing on Azerbaijan.