Admiration of the first republic and its president comes at the expense of the man today's authorities prefer to see as father of the nation: Heydar Aliyev. 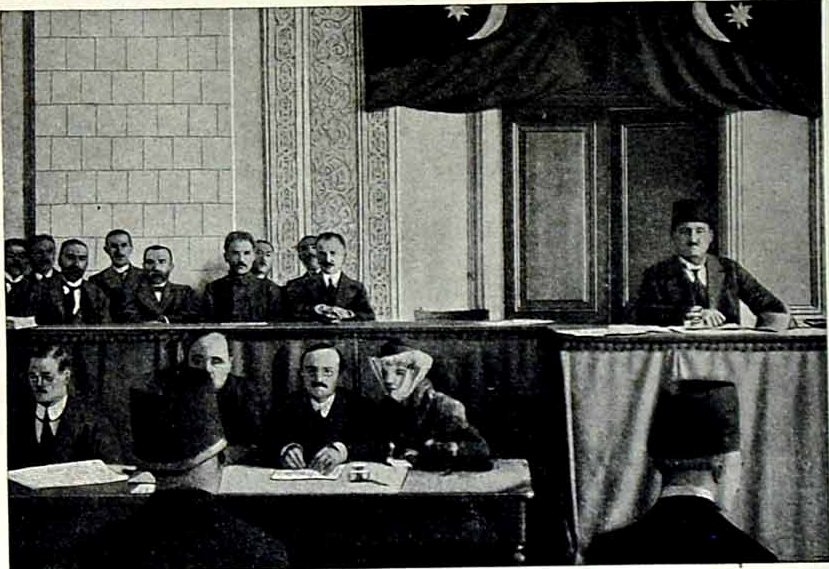 The first meeting of the Azerbaijan Democratic Republic’s parliament, 1918.

One hundred years ago this month, the first secular democracy in the Muslim world was established, the short-lived Azerbaijan Democratic Republic. The republic's progressive credentials – it was the first Muslim country to allow women to vote – are often touted by the publicity-loving Azerbaijani government.

But as the centennial of the republic's founding approaches, the same government is taking a low-key approach, offending some of the republic's admirers and highlighting the complex attitude that current authorities hold toward their forebears.

During a speech last year about the upcoming centennial, President Ilham Aliyev paid a sort of tribute to the republic. But when he named several of the key figures in Azerbaijani history, he pointedly omitted Mammad Amin Rasulzadeh, the leader of the first republic.

And when Aliyev again discussed the republic at an economic forum in March, he suggested that “if the founders of the first Democratic Republic had a chance to see how Azerbaijan develops today, they would have definitely been proud of us,” a formulation that admirers of the republic found insulting.

The first republic was a well-established democracy which was based on liberal values, said Altay Goyushov, an Azerbaijani historian. “Today, Azerbaijan is at the bottom of all the rankings, and if the founders of the Azerbaijan Republic actually saw it, they would be very upset,” he said.

The republic was founded on May 28, 1918, emerging out of the collapse of the Russian Empire. It was the first state in history to use the name “Azerbaijan,” and ran the country on liberal, modernizing principles until the Soviet Union invaded and annexed it in 1920.

“The republic's leaders were the most successful in Azerbaijani history,” said Jamil Hasanli, a historian and opposition politician.

For Ilham Aliyev, “the current republic is the heir of Soviet Azerbaijan under Heydar Aliyev,” rather than of the 1918-1920 republic, said Thomas de Waal, a Caucasus expert at Carnegie Europe, in an interview with Eurasianet. That means that “the first republic, with its Musavat government, language of democracy and rights, does not fit so well into this legacy,” he said. (Musavat was Rasulzadeh's political party; one of today's embattled opposition parties, of the same name, sees itself as that party's heir.)

Baku, indeed, has sought to steadily erase Rasulzadeh from the public sphere. Monuments and statues to him have been taken down over the past two decades, and his picture was removed from the country's currency.

The way the history of the republic is taught today is a direct result of the government's political directives, said Nigar Maxwell, head of a department dedicated to studying the first republic at Azerbaijan's National Academy of Sciences.

“Each statement by the authorities, starting with the president and then down the organizational ladder is a signal to public organizations and scientific institutions as a guideline for building a definite direction for them,” Maxwell told Eurasianet.

Formal events celebrating the centennial are few: a handful of museum exhibits and scholarly conferences have taken place, but they have been overshadowed by other events like the recently held Formula 1 race in Baku.

In the absence of larger events, republic admirers are marking the centennial online, by changing their social media profile photos to include a frame honoring the republic, setting up Facebook pages to raise awareness about the founding fathers, or organizing volunteering projects to commemorate the centennial.

A group of civil society activists and members of the opposition political party ReAL have organized a commemoration on May 28, the invitation to which makes a veiled but clear reference to today's political situation: “The path to freedom is not easy. One hundred years ago our ancestors accomplished this in spite of all the obstacles. We urge you to celebrate the proud page of our history – the 100th anniversary of our republic.”

Some government loyalists have complained about Rasulzadeh's admirers, including Zahid Oruj, who ran in April's presidential elections while asking his supporters to vote for Ilham Aliyev.

“Why is Rasulzadeh, a person who created Azerbaijan during the first republic, accepted by everybody, but Heydar Aliyev, who is the founder of the modern Azerbaijani state, is not accepted by the opposition and they don't hang his photo in their offices?” Oruj asked in a pre-election interview with the BBC's Azerbaijani service. “Let's change this mindset. If they accept the Heydar Aliyev model, these parties might participate in the future development of the country."

“Right now there is a narrative struggle between these two camps,” said Erkin Gadirli, a ReAL board member. “The government takes this [Rasulzadeh commemoration] seriously because the opposition made Rasulzadeh into an icon. If not, they would never have tried to put Aliyev ahead of Rasulzadeh.”

The government's recent rhetoric about Yerevan and other parts of current-day Armenia being Azerbaijan's “historical lands,” which sparked an international backlash, is part of its attempt to denigrate the first republic, Maxwell said.

“Today's Azerbaijan cannot be compared with the Azerbaijan Democratic Republic, because at that time there were difficulties and our independence did not allow Azerbaijan to pursue an independent policy,” Aliyev said in a January speech. “We had economic difficulties, land losses, and our historical city [Yerevan] was given to Armenia.”

“Unfortunately, the republic is remembered only from anniversary to anniversary, and so is easily used by both powerful and opposition figures as a card in their political games,” Maxwell said.