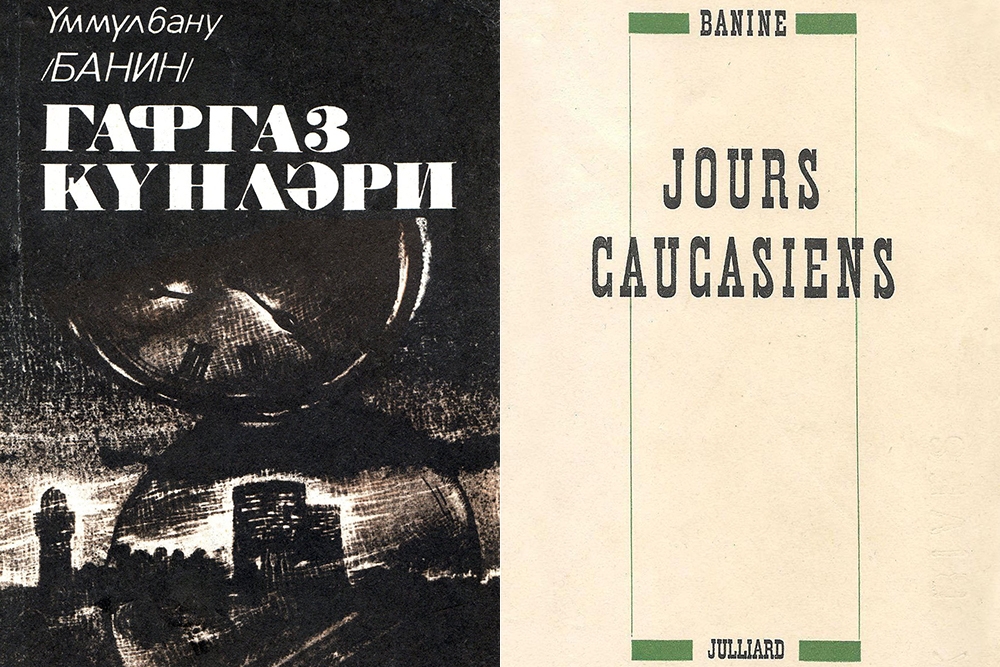 “Caucasian Days” was first published in 1946.

Like many of the Azerbaijanis who have left their homeland in recent years, Ümm-al-Banu Asadullayeva in 1922 was a victim of circumstance. She did not let that stop her.

A teenager when she fled the Azerbaijani capital, Baku, Asadullayeva would go on to become known to the French-speaking world as Banine, a close friend of German philosopher Ernst Jünger, and the Paris-based writer of 17 books, mostly memoirs or essays.

At her death in 1992, she was an 86-year-old woman who viewed her 17 years in Azerbaijan as something to leave behind; even though it was that very past that had fed her creativity in her new home, France.

In “Caucasian Days,” first published in French in 1946 as “Jours Caucasiens,” she describes a time that many Azerbaijanis in the post-Soviet era now idealize — the years before the Red Army invaded in 1920, and the country’s short-lived Azerbaijani Democratic Republic collapsed.

Yet unlike Kurban Said’s “Ali and Nino,” a fanciful novel that describes the same turbulent time in Azerbaijan’s history, “Caucasian Days” is presented as a facts-based work (though some believe names were changed). It provides the only written, eyewitness account of this era from an Azerbaijani woman.

Banine’s father, Mirza Asadullayev, heir to an oil-fortune, served as the Republic’s minister of trade and industry; a man consumed by the push for “an independent Azerbaijan.” She describes the still-standing Baku mansion in which she grew up as the site of constant government-meetings and ceremonies.

“I woke up to the sound of the ‘Internationale’ playing in the street,” Banine recalled, as she recounted the Red Army’s march into the Azerbaijani capital, Baku. “When I got up, I saw soldiers not looking Azerbaijani by either their looks, or their uniform. Those were Russian soldiers. “

The Azerbaijani army “disappeared without firing a single shot,” she continued. “The republic was destroyed . . . I witnessed the end of a world with my own eyes.”

Banine’s father was arrested. She claims that, as a 15-year-old, she was obliged to marry a man she did not love, in order for her father to receive a passport and be able to leave the country.

She later left her husband in Istanbul, and, solo, headed on to Paris to rejoin her sisters, father and stepmother. There, she worked as a model, while her family mostly lived on savings.

She never returned to Azerbaijan. A car accident prevented a trip proposed by Azerbaijani writer Elchin Afandiyev, the now deputy prime minister told Azerbaijanskiye Izvestia in 2006. She died in Paris less than a year after the Soviet Union’s 1991 collapse.

Today, Banine’s works, which feature topics ranging from Jünger to her conversion to Catholicism (“J’ai Choisi l’Opium” or “I Chose Opium”),
are not well known among Azerbaijanis. Her memoire about Azerbaijan was more popular at the end of the 1980s, when Soviet republics were testing the limits of Moscow’s control and, in some cases, calling for independence.

“Both the 1920s and 2014-2015 are remarkable for the brain drain in growing numbers for politically motivated reasons,” commented Goyushov, a member of the opposition REAL movement.

Amidst an intensifying government-crackdown on civil liberties in Azerbaijan, scores of Azerbaijani civil-society activists, journalists and others over the past year have been forced to find work abroad – for their own safety or that of their families in Azerbaijan.

“However, the picture for exiles in the 1920s was broader,” Goyushov noted. “Azerbaijan lost its independence, and people were hopeless about regaining it. Everything was so uncertain.”

For Banine, though, the past was just that.

Her literary heir, German painter Rolf Stürmer, told RFE/RL’s Azeri-language service recently that she came to see France, rather than Azerbaijan, as her home.

“She did not see very much of her country. She knew some streets of Baku and the gardens of Mardakan [a district of Baku – ed], the houses of her family and those of her friends,” Stürmer said. “She was a little girl, destined to become a wife and nothing but that; give birth to children and then die . . .”

In “Parisian Days,” a book describing her exile, and the only other of her works translated into Azeri, Banine bitterly describes the Caucasus as a place where women are treated badly, have less freedom than men, and traditions are blindly observed.

But, still, it was a homeland that appeared to facilitate her later life.

Banine’s stepmother was an ethnic Ossetian, Amina, who had grown up in Moscow and lived for a while in France. This woman, whom Banine revered, along with her German governess, Fräulein Anna, broadened her perspective on the outside world.

Banine and her three sisters were raised speaking German and French, and, like upper-class European girls of the day and unlike her peers, learned to play the piano.

Perhaps reflecting the more liberal norms of her later French surroundings, Banine openly describes the lives of her sisters and other relatives – stating, for instance, that two male cousins supposedly acted as paid, gay companions.

But tradition surrounded her, too.

Banine claims that she herself hesitated to tell her father of an affair with a non-Muslim, a Bolshevik-official, identified as “Andrei,” who later ran off with her cousin.

For latter-day readers, the fact that Banine never returned to Azerbaijan to bring her story full circle – contact with relatives was minimal, according to Stürmer – is regrettable.

“Caucasian Days” is based on the recollections of a child and teenager alone – written, said Stürmer, “like about a lost dream . . . “

Yet, for many, that can explain its attractions as well.