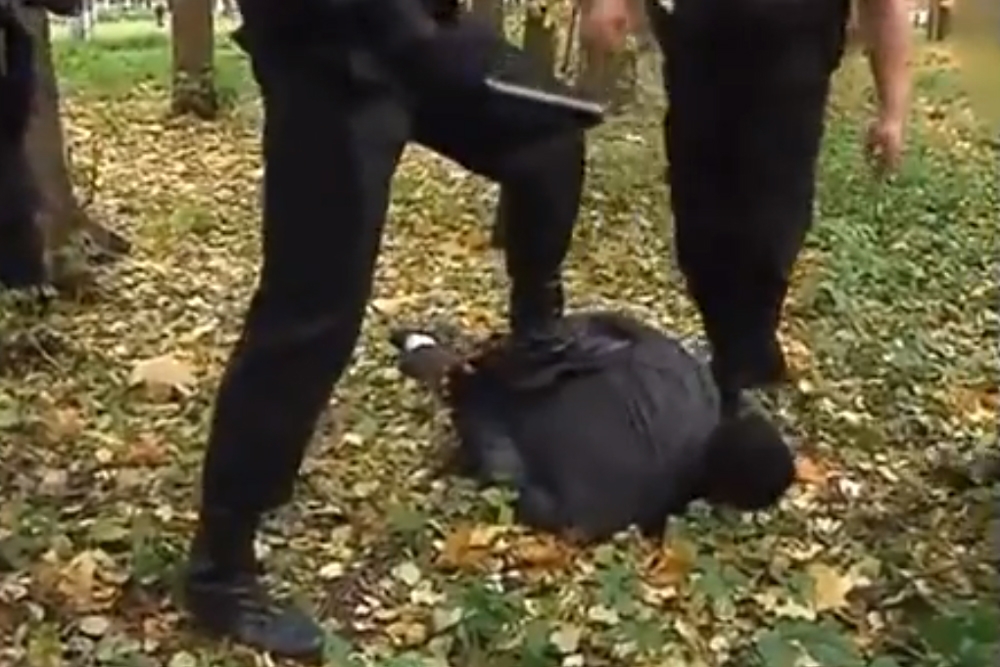 Public anger is building in Azerbaijan over Russia’s rough treatment of an ethnic Azeri accused of murder. The incident likely will scuttle any chance, however remote, that Baku will join the Moscow-led Customs Union.

On October 16, a 31-year-old Azerbaijani citizen, Orhan Zeynalov, was arrested in Moscow for the murder of Russian Egor Sherbakov after an alleged street altercation in the Russian capital’s Biryulevo District. Russian TV channels broadcast reports showing masked police officers beating and humiliating Zeynalov before dragging him, for unknown reasons, into the office of Interior Minister Vladimir Kolokotsev.

Anti-migrant protests followed the October 10 murder, with a mob looting a mall in Moscow and a vegetable warehouse allegedly owned by ethnic Azeris and a place of employment for many labor-migrants. (According to some estimates, 1 million Azerbaijani migrants are now in Russia; firm numbers do not exist.)
As sensationalist coverage from Russian media outlets gained steam, and “hundreds” of arrests and deportations of Azerbaijani labor migrants began, anger in Azerbaijan reached a quick boil. Even MPs from the ruling Yeni Azerbaijan Party, usually not ones to criticize Russia, denounced Moscow’s “medieval methods.”

On social networks and in traditional media, some Azerbaijanis argue that, given what is perceived as an unwarranted insult to Azerbaijan’s dignity, the country now has no option but to ally itself more strongly with the West, if “we want ever to become a civilized nation,” as one commentator stated.

While steering clear of such declarations, Ali Hasanov, a longtime senior presidential political advisor who is often seen as the administration’s mood-ring, signaled that the government isn’t going to look the other way. Terming Russian police’s behavior “inadequate” and charging that Russian media is “provoking hatred,” he warned on October 17, that “these actions could have a boomerang effect and create negative conditions for Russian society,” the Turan news agency reported.

The upshot of this anger, whether coming from the Azerbaijani government or public, could have one direct consequence, analysts say – ending any chance for Baku to look favorably on Russian President Vladimir Putin’s attempt to unite former Soviet republics into a so-called Eurasian Union. The initiative is widely seen as a Kremlin-branded alternative to the European Union.

“Indeed, I think that Baku could use the hysteria over the Orhan Zeynalov case as a pretext not to enter the Customs Union,” said Guluzade, who himself favors closer ties with the European Union.

While Azerbaijan has never indicated publicly that it is considering joining the Russia-led Customs Union, some observers believe that Moscow will start a membership-rush on Baku in the run-up to the European Union’s summit next month in Vilnius, where three former Soviet republics (Georgia, Moldova and Ukraine) are expected to formalize closer ties with the EU.

In September, Azerbaijan’s western neighbor Armenia announced, after much Russian coercing, that it would join the Customs Union. The decision came despite earlier talks with the EU about an Association Agreement.

Energy-rich Azerbaijan does not have the same economic concerns as does Armenia. Nonetheless, some Azerbaijani media outlets believe that pressure is being brought to bear – including by influential presidential administration chief, Ramiz Mehdiyev. The campaign, the story goes, included stirring up tensions with the United States after Azerbaijan’s October 9 presidential elections.
The government has not commented on these allegations.

Azerbaijan so far has no plans to move toward an Association Agreement with the EU. In October 21 comments to journalists, Deputy Foreign Minister Araz Azimov said that Baku would prefer “individual relations with the EU” rather than a relationship “based on some regional approach.”

Whether or not President Ilham Aliyev will participate in the Vilnius summit is not known, he added.

Many Azerbaijanis believe Moscow is on the lookout for diplomatic pressure points. Russian authorities may be acting under an assumption that, as is the case with labor migrants from Central Asian states, the deportation of guest workers is a political instrument that can exert pressure on Baku, some observers in the Azerbaijani capital suggest. Yet analyst Zardusht Alizade contends that Azerbaijan’s state of relative economic health means that the deportations “will not become an efficient lever to force Baku to join the Customs Union.”

“It will not cause really serious problems for society in Azerbaijan,” he added.

What the deportations are doing is reinforcing a widely held notion throughout the South Caucasus: Russia looks at its relationships with its southern neighbors not as mutually equitable, but in more colonial terms.

If Moscow, as a consequence of the uproar over the Biryulevo murder, starts to consider imposing visa requirements on Azerbaijani citizens, Bulbuloglu continued, Baku “is ready to consider a visa regime with Russia.”

Baku is “not insulted” by Moscow, Bulbuloglu added, but it expects “the resolution” of the Sherbakov murder-case to take place “within the framework of the field of law.”