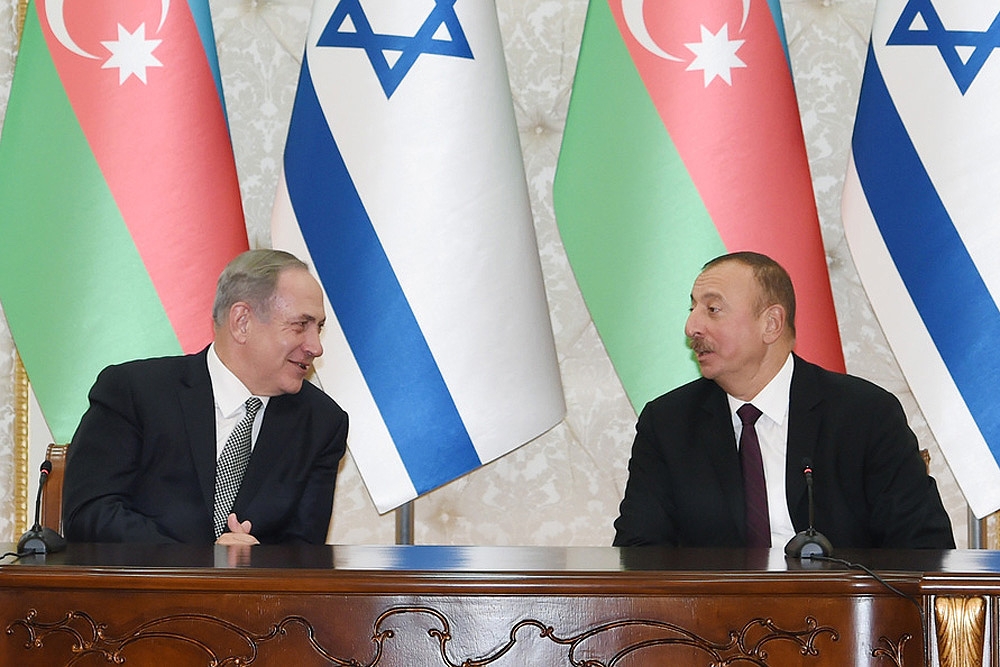 Netanyahu’s visit on December 13, his first since 1997, resulted in the signing of four cooperation agreements, including one creating a joint economic commission that Netanyahu said would expand Azerbaijani energy exports to Israel.

“We obviously have a robust relationship in energy,” Netanyahu said at a joint press appearance with Azerbaijan President Ilham Aliyev. “Now we’re talking about not just the sale of oil from Azerbaijan to Israel, which is a very important part of our oil imports, we’re talking about using common facilities for the export of gas and the linking of Israel’s gas exports potentially to a great pipeline that is being built as we speak right now from Azerbaijan into Turkey.”

Netanyahu was referring to a plan to export Israeli gas via Turkey to European markets, using the Azerbaijani-led Trans-Adriatic Pipeline. Netanyahu’s visit was announced in July, and it was predicted then that it would showcase some kind of weapons deals. While none of the four agreements signed in Baku had to do with military cooperation or arms sales, Aliyev mentioned the large volume of arms deals with Israel, the value of which he cited as $4.85 billion.

“The biggest part of these contracts has already been executed and still we are continuing to work on that and we are very satisfied with the level of this cooperation,” Aliyev said.

Security cooperation has played a large role in boosting Israel’s image in Azerbaijan, in particular after the April four-day war with Armenia, in which several new arms acquisitions from Israel, including drones and missiles, were revealed for the first time. The performance of those weapons showed that, in the words of Azerbaijani military analyst Uzeyir Jafarov, “Israeli equipment is better quality and more modern than Russian weapons.”

Russian weapons still make up the bulk of Azerbaijan’s arsenal; the Stockholm International Peace Research Institute calculated that 85 percent of Azerbaijan’s arms expenditures from 2005-2014 went to procurements from Russia.

Recent arms deals have had a significant impact on public opinion, improving sentiment towards Israel. Some Azerbaijanis – particularly radical members of the Shia majority – are sympathetic to Iran and influenced by Iran’s adversarial relationship with Israel. Others oppose Israel due to sympathy with Palestinians. But in recent months, there has been a noticeable increase in positive articles about Israel in the Azerbaijani media, and social media attitudes appear to have shifted to a positive focus on Israel’s military contributions to Azerbaijan.

Israel appears to be interested in taking advantage of its enhanced public image to deepen bilateral ties in two potential ways.

First is the possibility that Azerbaijan will open an embassy in Tel Aviv. Baku has long been reluctant to do so, given the negative reaction that such a move would engender in much of the Muslim world. The embassy question has been a source of contention between Israel and Azerbaijan; in mid-April one high-ranking Israeli diplomat told EurasiaNet that it was an obstacle to improved bilateral ties, in particular business ties.

Israel is “interested in cooperation in agricultural, energy, pharmaceutical and other spheres” with Azerbaijan, said its ambassador to Baku, Dan Stav. In this context, it could be significant that one of the agreements signed during this visit is related to agricultural cooperation.

Secondly, the April war also diminished misgivings within the Azerbaijani government about the military partnership with Israel. Many in Azerbaijan saw Israel as an untrustworthy military supplier because of the Georgia-Russia war in 2008, when it emerged that codes for Israeli-made drones purchased by Georgia were acquired by Moscow, enabling Russian forces to neutralize the drones.

Azerbaijan continued to buy Israeli weapons, but many in Baku remained suspicious as a result of Georgia’s experience; there also was a worry that Israel was selling only outdated weapons to Azerbaijan. However, the four-day war dispelled those concerns, opening the door for deeper military cooperation, not only with Azerbaijan, but elsewhere in the post-Soviet space. Kazakhstan, for example, announced in August that it had signed an agreement with Israel to jointly manufacture drones. Azerbaijan, meanwhile, has expressed a desire to counter Armenia’s recent acquisition of Russian Iskander ballistic missiles.

Iran has long looked warily at the relationship between Azerbaijan, its northern neighbor, and Israel. Over the last several years, however, tension between Iran and the West decreased as the result of the presidency of Hassan Rouhani, and a landmark nuclear deal. Accordingly, Tehran reacted relatively calmly in recent years to the visits of Israeli officials to Baku.

The harsh reaction to Netanyahu’s visit could stem from the fact that with the incoming US administration of President-elect Donald Trump, Netanyahu is in a position to potentially attempt to unravel the Iranian nuclear deal.

Netanyahu’s visit also could help bolster Azerbaijani influence with the US government. Baku has benefited in the past from lobbying efforts undertaken in Washington by the American Israel Public Affairs Committee (AIPAC). The conservative AIPAC had relatively little influence in the Obama administration, but it stands to have much greater sway over a Trump White House. AIPAC could use some of that expanded influence to advocate on behalf of Baku, one Azerbaijani researcher from a government affiliated institution told EurasiaNet on condition of anonymity.

The prospects for future arms purchases from Israel remain unclear. But an analysis of past arms purchases provides some clues that further acquisitions are in the pipeline. Tallying the market prices of the weapons already delivered to Azerbaijan indicates that less than $4.85 billion worth of arms has been acquired so far. In addition, Azerbaijan has already procured the EL/M-2080 Green Pine air defense radar from Israel. The radar is designed to work with Israel’s Arrow theater ballistic missile system, and is likely the best response, of the options available to Azerbaijan, against Armenia’s Iskander missiles.