Azerbaijan: Officials Are Wrong to Securitize the Shias 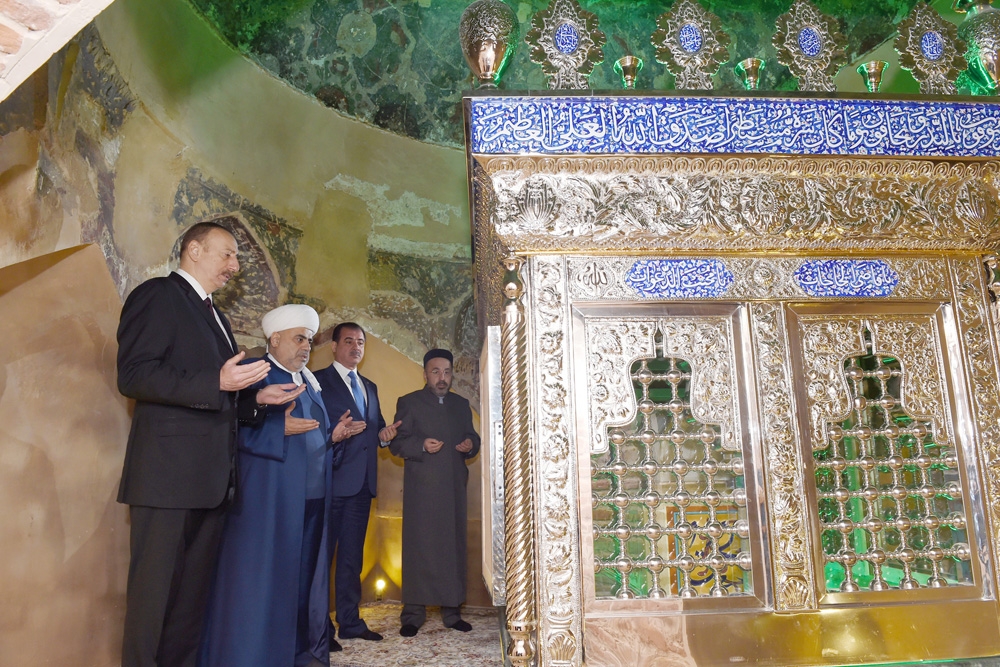 Azerbaijan’s President Ilham Aliyev (left) prays at a religious complex in Ganja. While the president has repeatedly made a point of demonstrating his faith, critics say authorities restrict religious freedoms to the nation’s peril. (Photo: Azerbaijani Presidential Press Service)

Groups of humbly dressed, unshaven men in black shirts flocked to mosques in mid-October in the town of Lenkoran to listen to marsiye – a mournful elegy performed by a white-turbaned cleric to commemorate the martyrdom of Imam Hussein and his comrades in the battle of Kerbala, a defining moment for the world’s 100 million Shias. The mosque is situated near the town’s bazaar area, filled with small shops trading everything from teapots to screwdrivers. Tables were lined up beside the mosque for ehsan giving – free food and tea for the faithful.

The faithful, however, were careful not to display any flags honoring the killed Imam Hussein and to avoid praying on the streets, in compliance with the recent guidelines issued by Allah-Shukur Pasha-zade, the head of the official Spiritual Board of the Muslims of the South Caucasus, a Soviet-era legacy designed to control the religious life of Azerbaijani Muslims. Nearby, police officers observed the scene to spot potential troublemakers. No incidents were registered as the worshippers make no inflammatory, or even remotely political, speeches. However, there was a whiff of tension in the air – and some believers were asked to show their passports to the police while attending the religious ceremony, witnesses later reported to this author.

The context of this year’s restrictions was set by events in another Shia village far from Lenkoran: Nardaran, near Baku, where clashes between the police and believers in November 2015 resulted in the deaths of four believers and two policemen. The clashes erupted mostly over poor socio-economic conditions and chronic unemployment in the area. Since Nardaran is traditionally known for its Shia piety, it should surprise no one that the protests acquired an Islamic bent.

Since then, the authorities have cracked down on the Muslim Unity Movement (MUM), an Islamist group accused of inciting the violence in Nardaran. Its leader Taleh Baghir-zadeh, a young Shia cleric, and 17 others are facing charges of terrorism, attempted coup, illegal weapons possession, and homicide.

According to Human Rights Watch, all the men alleged at trials that police repeatedly beat them to compel confessions and testimony. Authorities denied the allegations and did not investigate. According to a report presented by the Shia Rights Watch, a Washington-based advocacy group, at a September 2016 session of the United Nations Human Rights Council, the authorities have imprisoned over 150 Shia activists and 18 Shia scholars and banned 732 religious books in Azerbaijan, for allegedly inciting religious hatred. While it is difficult to corroborate these numbers independently, Human Rights Watch sets the number of the arrested at 68 in Nardaran alone.

By any standard, this is a high number. Yet it should be noted that the fact that the government often misuses the label of “Islamic extremists” to silence its critics does not mean that there might not be violent radicals among them. When such is the case, they should face fair trial and held accountable. What is wrong and counter-productive under any circumstances is to securitize the whole community because some of its members may have been involved in unlawful acts.

But this is what the arbitrary restrictions on religious liberty amount to. The restrictions also are in contravention to the Constitution of Azerbaijan, which grants the citizens the right to freedom of assembly, religious practice, presumption of innocence and equality regardless of religious denomination.

Authorities’ claims that such heavy-handed measures are necessary to combat religious extremism seem to be overblown. According to a Pew Research Center poll conducted in Muslim-majority countries in July 2016, Azerbaijanis are among the least supportive of the idea that the Shariah law should take precedence over civil law, with only about 8 percent of Azerbaijanis holding such views. Even if some of those surveyed were not genuinely open in expressing their views, there is still precious little evidence to suggest that Azerbaijanis are eager to establish a theocracy.

There is a danger that treating peaceful believers as a security threat could eventually foster a self-fulfilling prophecy. As experiences in other Muslim-majority countries show, unjustified limitations of religious freedom can lead to radicalization, especially in the absence of available outlets for political dissent, as is the case in Azerbaijan today. A harsh treatment of religious activists could, in this context, accord them a status of martyrs.

A big downside of a heightened focus on the Shias is that it diverts the attention from a far bigger security threat – the Wahhabi/Salafist activism. No Azerbaijani Shia has been involved in terrorist acts either in Azerbaijan or abroad. There are, by contrast, hundreds of Azerbaijani Salafis who are known to have joined the terrorist organizations Islamic State and Al-Qaeda in Syria. With Islamic State increasingly squeezed in Syria and Iraq, some of them might well set their sights on Azerbaijan.

What Azerbaijan needs today is not the harassment of ordinary believers on stretched security grounds, but a genuine respect for diversity of views, beliefs and lifestyles. This would form a better basis for a long-term, sustainable security and stability in the country.