Authorities say an assassination attempt was a wide-ranging Islamist plot. Now, amid a series of trials, few seem to believe the official story. 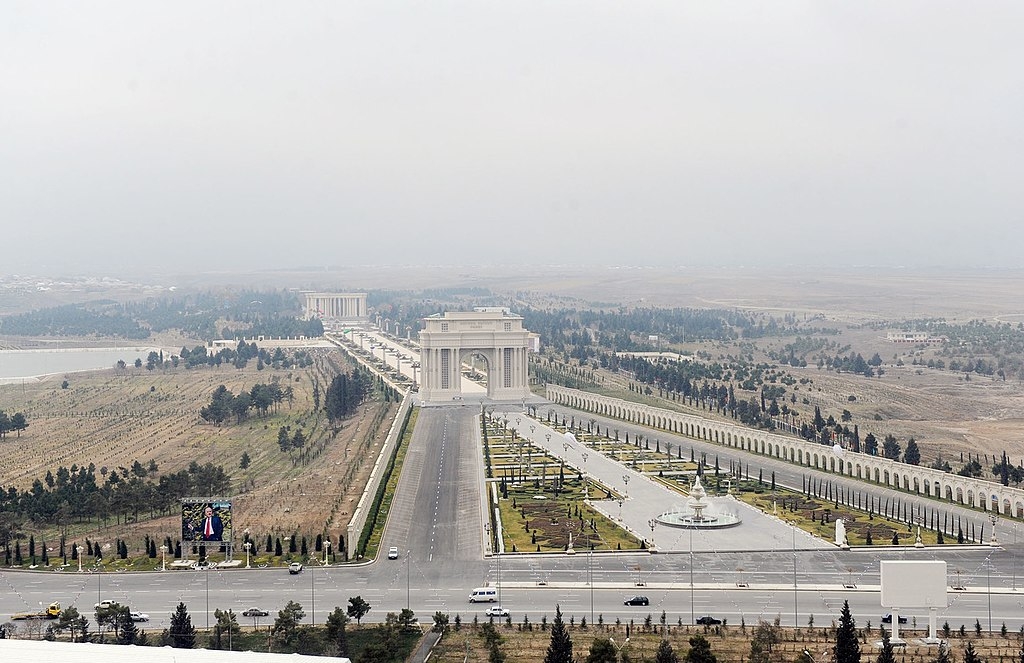 More than a year after an attempted assassination set off a series of arrests, killings, and allegations of a wide-ranging Islamist plot, Azerbaijanis remain as far as ever from understanding what was behind the murky events. And a series of trials of the dozens of suspects, currently ongoing, have only raised more suspicions that the official story does not correspond to whatever really happened.

“Our children are victims of a filthy game,” said Sevinc Huseynova, whose 24-year-old son Elmir is currently on trial for his role in the events. “I’m 100 percent sure of it,” she told Eurasianet.

On July 3, 2018, someone tried to assassinate Elmar Valiyev, the mayor of Azerbaijan’s second city Ganja, authorities said. A suspect, Yunis Safarov, was quickly arrested. Officials claimed that Safarov was part of an Islamist conspiracy. The government has stuck to that line: Ali Hasanov, a senior adviser to President Ilham Aliyev, said on the one-year anniversary that the violence was carried out by “radical-clerical circles of certain governments, separatists and groups inside the country.”

A week after the assassination attempt, a small demonstration in support of Safarov took place in front of city hall, and two police officers were reported killed.

Police rounded up several dozen suspects: In total, 77 people have been charged related to the attacks and 11 more remain wanted. At least 10 suspects have been killed, including the man accused of killing the two police officers, Rashad Boyukkishiyev.

The case has shaken Azerbaijan, not only because of the dramatic accusations of plots and conspiracies but because of the unusual suspects. While persecution of the political opposition has become an old story in Azerbaijan, the targets here appear to be purely random people who ended up in the wrong place at the wrong time.

Trials began in February in Baku with judges from Ganja taking part. Groups of several defendants are being tried at a time, facing charges including committing violence, looting, use of firearms and explosives, and armed resistance to the government. Thus far six groups of trials, involving 51 suspects, have been completed and all have been convicted and sentenced to prison terms of between five and nine years. Two more groups of trials are ongoing.

The trials have relied heavily on witness statements and prosecutors’ claims and have underplayed video evidence that often appears to exonerate the suspects. Prosecutors and judges have concentrated primarily on the suspects’ religiosity and alleged ties to Islamist groups.

But defendants and their families have rejected claims that they are Islamist radicals – or even observe Islam – and say they were in fact the victim of indiscriminate roundups. One suspect, Jabir Azizov, told the court that he drinks alcohol, so “how can I be part of a religious demonstration?”

One of the signature features of the trials has been the regular presence of the suspects’ relatives, especially mothers and grandmothers, who have come from across Azerbaijan to attend. The women present a somewhat subversive presence among the otherwise all-male proceedings, jeering when the prosecution makes improbable claims and holding regular demonstrations in Baku.

Sevda Yusifova, whose son Vugar Yusifov faces 10 charges related to the events, said Yusifov had only come to Ganja from their home in the neighboring city of Shamkir to get his cell phone repaired. She said Yusifov’s taxi had stopped at a red light when the demonstration was taking place and, out of curiosity, he decided to get out and check out the scene. “He didn’t lay a finger on anyone,” she told Eurasianet. “It was pure coincidence” that he was at the demonstration. “And now he is accused of being the bodyguard of Rashad.”

Several of the defendants have said they were tortured in jail. “They tied something to my little fingers and applied electricity,” Bakram Aliyev wrote in an open letter in March, published in local media via his lawyers. “I screamed so much I lost my voice. Both of my fingers were torn to pieces.” His trial is ongoing.

Sevil Mammadova, whose grandson Raul Suleymanov was sentenced to four years in prison on charges including mass disorder, violence against representatives of the state, and drug-related offenses, said he was tortured as well. “They put two charges on Raul and tortured him,” she told Eurasianet. “They tied his head to his knees and beat him badly.” Mammadova, too, said her grandson was rounded up indiscriminately, walking toward his home, which is very close to the area where the demonstration took place.

“Most of the accused who have testified stated unequivocally that they had been subjected to severe torture in police stations in the first and subsequent days of their detention,” the Committee Against Torture and Repression, a watchdog, wrote in a recent report about the trials. “The scale and cruelty of the torture was so severe that many victims lost consciousness. Some have attempted suicide due to the inhumane treatment.”

Law enforcement and government officials have denied the torture allegations.

Officials also have dismissed the relatives’ claims of innocence and continue to maintain that what happened was a terrorist plot. “Everyone’s child is dear to his parents,” Musa Guliyev, a member of parliament from Ganja, told Eurasianet in an interview. “Parents want to make excuses for their children, this is natural. What parent would be proud when their child is arrested?” He said the state was obligated to respond forcefully to the events. “Every attempt to attack the state should be prevented, everyone must be punished.” 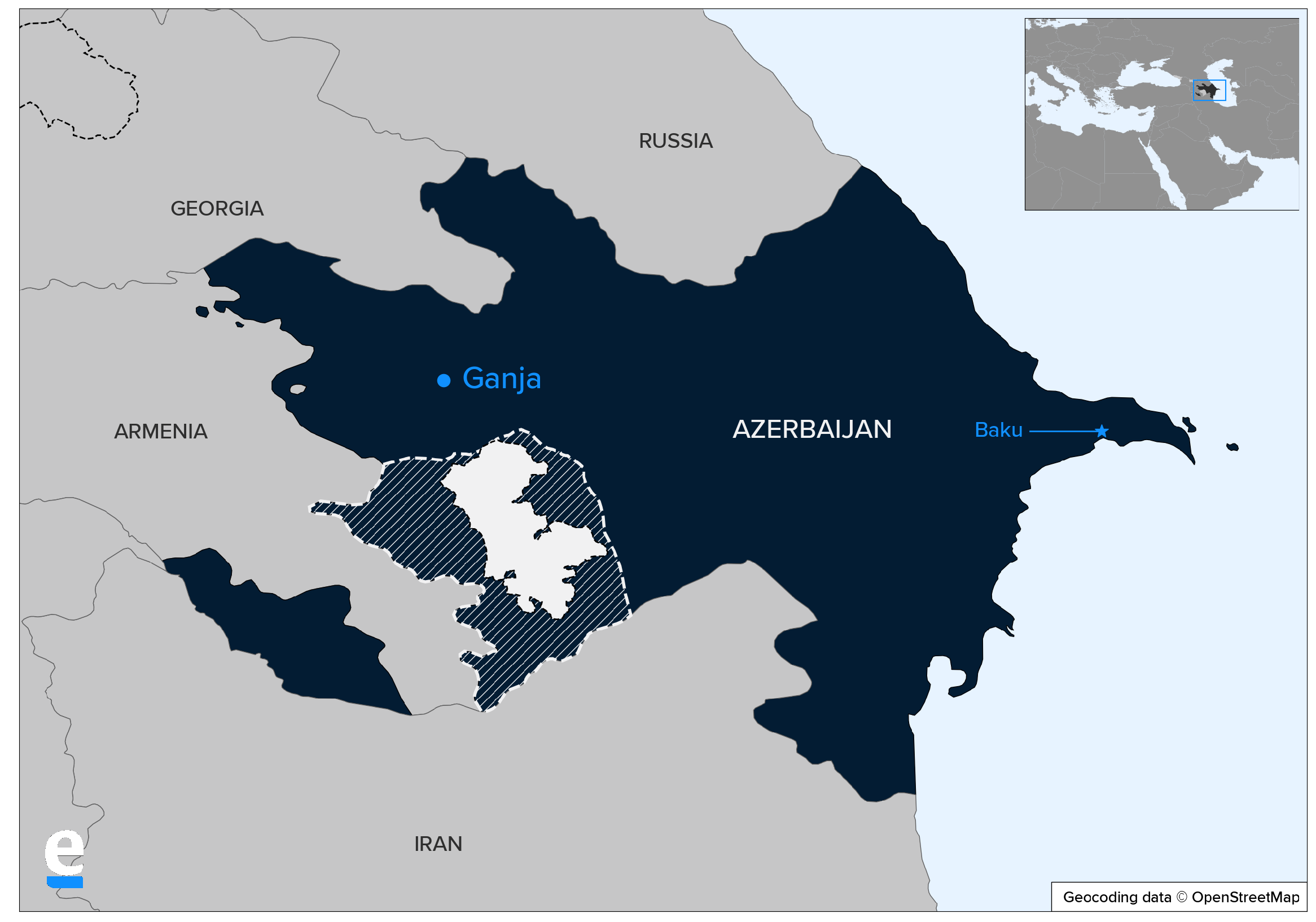 Meanwhile, the trials have offered few answers to the many questions and conspiracy theories that arose in the wake of the attacks. Who was behind the unidentified social media accounts that called people to the demonstration in support of Safarov? How to explain the presence of many women in hijab on the scene, whom police accuse of throwing dishes at them but who have not been identified? Why were the police officers at the demonstration, who said they were expecting violence, largely unarmed?

Video surveillance footage displayed during the trials has suggested that Boyukkishiyev attacked the police by himself. “No one helps him,” the Committee Against Torture and Repression report said. “No one in the area had a weapon except him.” The report notes that many of the police on the scene behaved in a surprisingly casual fashion when two of their colleagues were stabbed: “Rashad Boyukkishiyev walks up and down the square, holding up his knife. The police either ignore him or don’t stop him, and some of them just watch him get away.”

Political analyst Zardusht Alizadeh said the authorities appear to be trying to hide the fact that the Ganja mayor was widely hated and that the attack on him may have been an act of personal revenge.

The mayor, Valiyev, “had done so much wrong, committed so many crimes, and humiliated the poor people that there had to be some kind of punishment,” Alizadeh told Eurasianet. “In the end, a brave individual emerged who responded to state terrorism by individual terrorism. This was a dangerous moment for the authorities, people might have realized that the best reaction is not to appeal to courts but to punish the oppressor personally. So the authorities tried to scare the public and made up various lies: Islamic radicalism, ISIS, Iran, the participation of foreign forces, and so on.”

Oktay Gulaliyev, of the Committee Against Torture and Repression, said that the public reaction against the trial has been strong enough that the government has retreated a little. In July, the prosecutor at the Court of Appeals was replaced, and his replacement petitioned the court to reduce the sentences of those already convicted. Some suspects have been released and others are expected to be released soon.

But the relatives, he said, are not mollified.

“They are demanding not just concessions but that their children be acquitted and released, and for officials involved in their persecution and torture to be punished,” Gulaliyev told Eurasianet.

Chimnare Jafarova’s son was arrested after going to the demonstration out of curiosity. “Without any proof they instantly declared my son a criminal,” she said. “There were all kinds of tortures. This is how the Ganja police act. I hate just seeing the face of a policeman. But I won’t stop, I will demand justice until the end. All the mothers will.”

“This injustice is creating anger in our children,” Sevinc Huseynova said. “The government should take care that this anger does not turn into revenge. I’m afraid of this.”