The new route could allow more Caspian gas to be exported to Europe, but can Azerbaijan produce enough to make a difference? 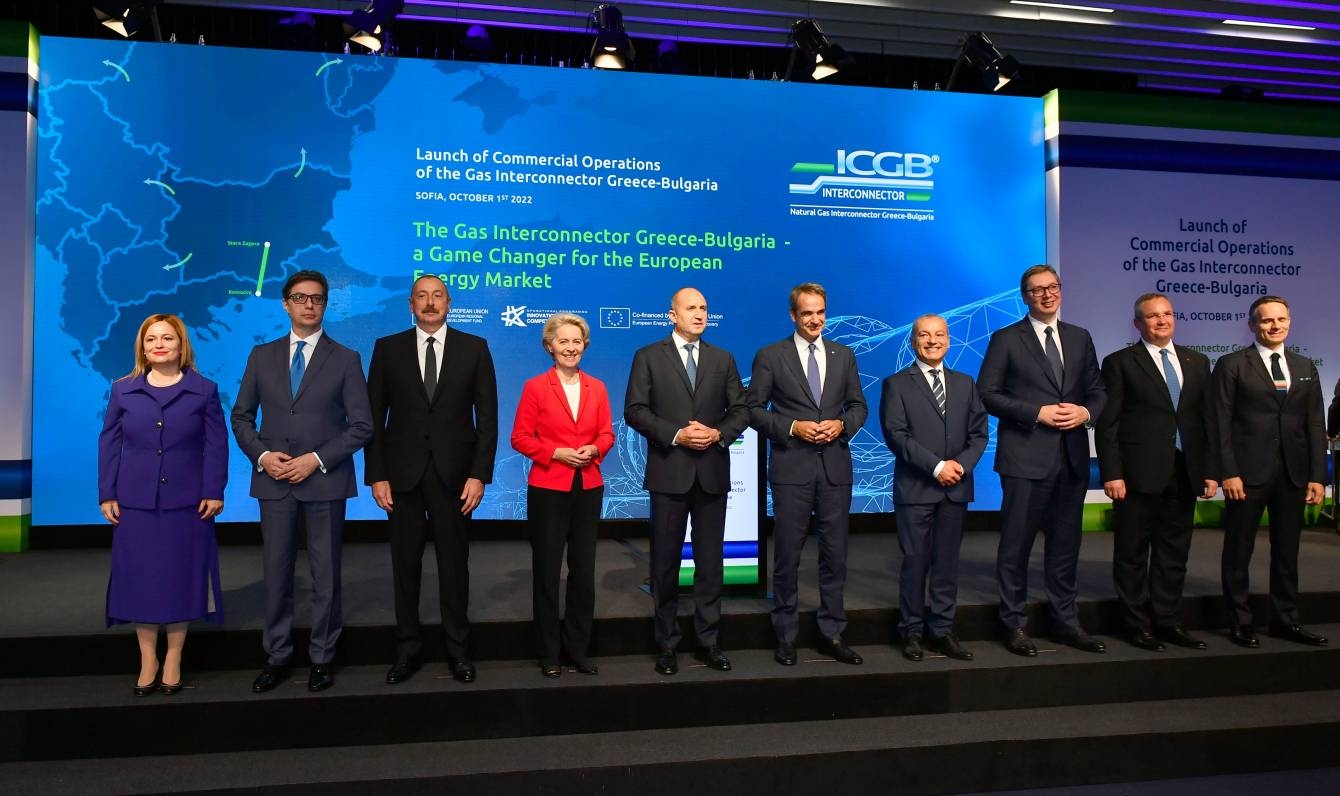 The commissioning of a new Greece-Bulgaria Interconnector (IGB) gas pipeline has been heralded by Baku and Brussels as a step toward getting Europe less dependent on Russian gas.

Meanwhile, other signs have emerged suggesting that Azerbaijan may not be able to deliver on even the modest increase they promised the European Union earlier this year.

The IGB was inaugurated on October 1 at a ceremony in Sofia, with Azerbaijan President Ilham Aliyev in attendance, along with leaders from the European Union and several of Bulgaria’s neighbors – Serbia, North Macedonia, and Romania – who also stand to gain.

"The IGB project will play an important role in strengthening energy security of Europe and diversification of gas supplies," Aliyev said in his speech.

Supplied by gas from the three pipelines that make up the Southern Gas Corridor from Azerbaijan through Georgia and Turkey to Greece, the IGB pipeline will initially carry only the 1 billion cubic meters (bcm) per year of gas that Azerbaijan has contracted to supply to Bulgaria.

That will go some way towards meeting Bulgaria's annual demand of roughly 3 bcm, most of which had been supplied by Russia. Moscow halted those deliveries in April in retaliation for EU sanctions imposed on Russia for its invasion of Ukraine.

At full capacity the IGB line could currently carry up to 3 bcm per year and could be expanded to ship up to 5 bcm per year. That raises the potential for Azerbaijan, using Bulgaria’s existing gas pipelines to neighboring countries, to supply energy further into the Balkans and Central Europe, as well as Moldova and even Ukraine.

Russia has already cut gas exports to most of Europe, and on October 4 threatened to do the same to Moldova. “In the long term, we are trying to find alternative supplies with our partners, such as Azerbaijan,” Moldova Deputy Prime Minister Andrei Spinu said in September.

The IGB was planned long before the current crisis, and its construction had been delayed by the COVID pandemic. Its completion now will likely allow Bulgaria, combined with the liquefied natural gas it can get from Greece and Turkey, to make it through the coming winter without complications.

But its broader impact on Europe’s energy independence from Russia remain unclear.

Azerbaijan’s reserves are limited: In July, Azerbaijan and the EU signed a Memorandum of Understanding under which Baku is "expected" to deliver 12 bcm of gas to the EU this year – up from the 10 bcm that has been contracted. Those figures already included the gas planned to be supplied through the IGB, and represent a small fraction of the roughly 150 bcm that Russia supplied to Europe annually.

And there are indications that Baku will not even reach that modest target.

In his address at the IGB commissioning ceremony Aliyev said that Azerbaijan's gas exports this year will increase and "11.5 billion cubic meters will go to European consumers." That echoed a previous estimate by Energy Minister Parviz Shahbazov.

No reason has been given for the decreased projection, but given the looming winter energy crisis in Europe, interest in even small volumes of gas has been intense.

It’s not clear whether the issue has been with the BP-operated Shah Deniz gas field that produces all the gas that Azerbaijan exports; or in some part of the Southern Gas Corridor pipeline network that leads from the Caspian Sea through Georgia, Turkey, Greece, Albania and Italy; or for some other reason.

Earlier this year BP, which also is a shareholder in two of the pipelines to Europe, suggested that capacity of both the field and the pipelines could be expanded to 11 bcm per year from the previous ten.

The company has not responded to queries from Eurasianet as to how it would be possible to further boost capacity to 12 bcm, or why the target has now slipped to 11.5 bcm.

Adding to the mystery: sales contracts for gas from Shah Deniz to Europe currently remain at just 10 bcm per year with no new supplies announced, an industry source told Eurasianet.

Meanwhile, it appears that Azerbaijan has lately been exporting more gas to Turkey and less to Europe. In August, Azerbaijan’s gas exports to Europe dropped 27 percent from the figure in July, while exports to Turkey rose by 20 percent, according to data from Azerbaijan’s Energy Ministry.

The volume difference does not account for the full 0.5 bcm gap, and it’s not clear whether it is related.

While Turkey has not been cut off Russian gas, it is having its own gas problems. Mindful of potential shortages it has been striving to fill its 5.8 bcm of underground storage capacity ahead of winter.

The lack of clarity on the EU deal also raises questions about longer-term plans for expanding the pipeline network and boosting Azerbaijani gas exports to Europe by "at least" 20 bcm by 2027, as the two sides agreed in July.

In his speech in Sofia at the commissioning of the IGB pipeline, Aliyev confirmed that Azerbaijan has "started consultations with our partners" over the pipeline expansion plans, noting that without such efforts "it will be difficult to provide additional supplies.”

Aliyev didn't elaborate on where he expects the extra gas will come from, however.

BP has said publicly that its Shah Deniz field cannot supply all the additional 10 bcm per year that Azerbaijan and the EU have agreed on, and Azerbaijan’s other fields do not appear able to make up the difference.

Turkmenistan has been repeatedly mentioned as a possible source, but there is no visible movement on that issue.