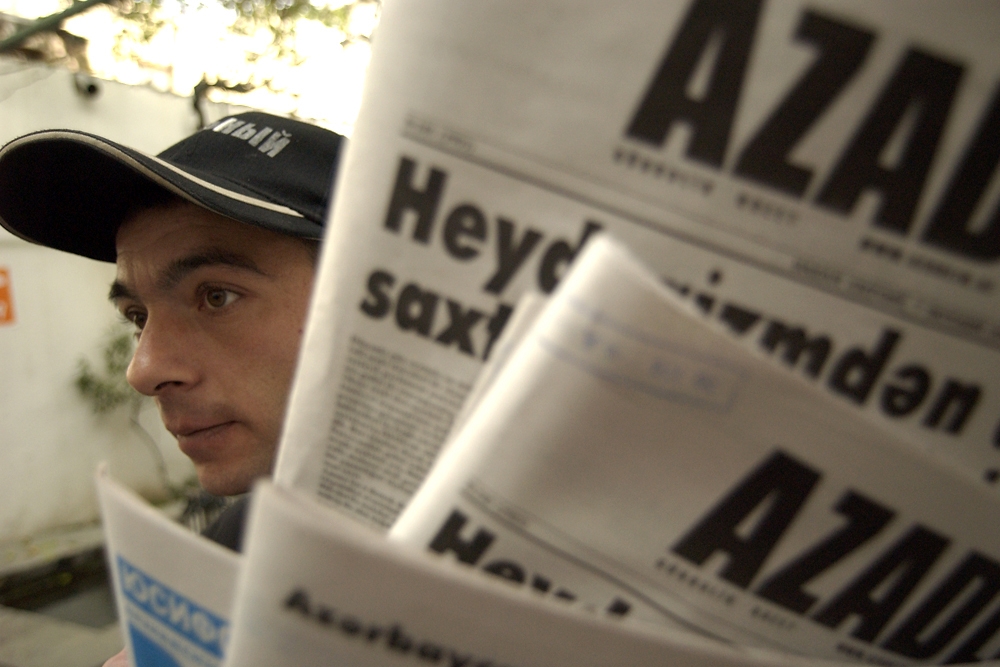 Should newspaper reporters get free apartments from the government? (Photo: Dean C.K. Cox)

In Azerbaijan, opposition journalists have long been beaten, blackmailed and some even killed. But now, it appears a few are being bought.

When it comes to media freedom, President Ilham Aliyev’s administration has a dismal record. In recent years, the government has tended to resort to the stick to go after journalists who expose official misdeeds, or otherwise vex people in high places. With a presidential election fast approaching in early October, however, authorities have evidently opted to offer a few carrots in the hopes of quelling critical news coverage

In late July, the government opened an apartment building with 155 one-, two- and three-bedroom units to be occupied exclusively by working journalists and their families. The 17-story structure, built at a cost of 5 million manats ($6.37 million), is located in the Baku suburb of Bibi Heybat. Many of the takers are affiliated with pro-government media outlets and information entities. But a few new tenants work for opposition-oriented and independently owned outlets.

Some journalists contend that the offer of free housing is a thinly disguised government bribe, designed to influence media coverage. “Authorities have finally turned the fundamental right to freedom of speech into the right for freedom from paying rent for an apartment,” quipped former newspaper editor Shahveled Chobanoglu in a Contact.az op-ed.

Two employees of the government’s most outspoken media critic, the newspaper Azadliq (Freedom), a periodical associated with the opposition Popular Front Party of the Azerbaijani Republic, applied for and were given free apartments in the Bibi Heybat building. Several employees from other opposition newspapers, Yeni Musavat (linked to the Musavat Party) and Bizim Yol (Our Way), are also tenants.

Azadliq Editor-in-Chief Rahim Hajiyev told EurasiaNet.org that, despite his strong objections to the project, he did not refuse when two employees “really in need” informed him that they wanted to apply for the flats. “They asked me and I just could not say no because the newspaper cannot fulfill their financial needs,” Hajiyev said. He underlined though, that he is not comfortable with their decision. “I agree, it is a vicious practice to take grants and apartments from the government. I cannot say we are right,” he said. The paper also receives revenue from the government’s Media Support Fund.

“We are working in very tough conditions, deprived of any foreign donor support and advertising revenues and have to survive,” Hajiyev added

Both Hajiyev and the opposition journalists who live in the building insisted that the acceptance of a government-funded apartment will not influence the way either the journalists in question, or the outlets they work for, carry out their watchdog functions.

The Turan news agency was the only privately owned, pro-opposition outlet that refused -- despite several supposed invitations from the government – to seek any apartments for its employees.

One Turan reporter, Huquq Salmanov, suggested that the government seemed more interested in trying to compromise the journalistic integrity of opposition media outlets, than in helping any specific journalist in need. When Salmanov, whose family faces acute economic hardship, applied for an apartment as an individual, officials told him he could “only get an apartment as a Turan correspondent.”

“They wanted to have Turan in the list of recipients,” Salmanov claimed. “I did not want to play these games, and refused.”

Media Support Fund Director Vugar Aliyev was not available for comment to EurasiaNet.org.

Salmanov is far from the only journalist struggling to make ends meet in Azerbaijan. On average, monthly salaries for broadcast, online or print journalists amount to just 450 manats ($574), while the typical rent for a flat in central Baku can easily be double that, if not more. The comparatively high cost of living in Baku is what drove most, if not all the opposition journalists to apply for a place in the Bibi Heybat building.

“It is not possible to have a decent life with our salaries when you need to rent a place to live,” said one of the opposition journalists/ Bibi Heybat residents, a married father of two children. He spoke on condition of anonymity.

The opposition journalist saw no conflict of interest in his actions. “The building was not built with Ilham Aliyev’s personal money,” he reasoned. “I received the apartment from the state and, therefore, do not feel under an obligation” to the Aliyev administration.

In general, the scramble for apartments seemed to highlight a shortcoming in Azerbaijani journalists’ understanding of what constitutes a conflict of interest.

Another opposition journalist, Aygun Muradkhanly, a Yeni-Musavat correspondent, believes the government has an obligation to financially assist journalists. When Muradkhanly’s name was removed from the list of apartment recipients a few days before the building’s opening, she appealed to President Aliyev. “I have 22 years of experience and have rented an apartment for the last 14 years,” she told to EurasiaNet.org. “I also deserved an apartment.”

Such sentiments harken back to the Soviet era, when the state provided apartments and other perks to members of the creative class who toed the government line. Rejected from the first media building, Muradkhanly expressed gratitude that the presidential administration subsequently promised her an apartment in the future.

Meanwhile, at least one recipient of a Bibi Heybat apartment has acknowledged owning another flat, a violation of the eligibility requirements. Rashad Majid, editor-in-chief of the privately owned 525-ci Gazet, admitted in an editorial that he has an apartment in Baku, but sees nothing wrong with getting a new one for free. “I am in journalism for many years and deserved it. My son, who is also a journalist, will live in the new apartment,” Majid wrote. “I want the government to give me two more apartments for my two other sons.”

Such apartments will soon be on offer. In late July, President Aliyev allocated another 5 million manats for the construction of a second media residence, next to the first. Construction already has begun.