Azerbaijan: Painting With Oil – No, Not that Oil 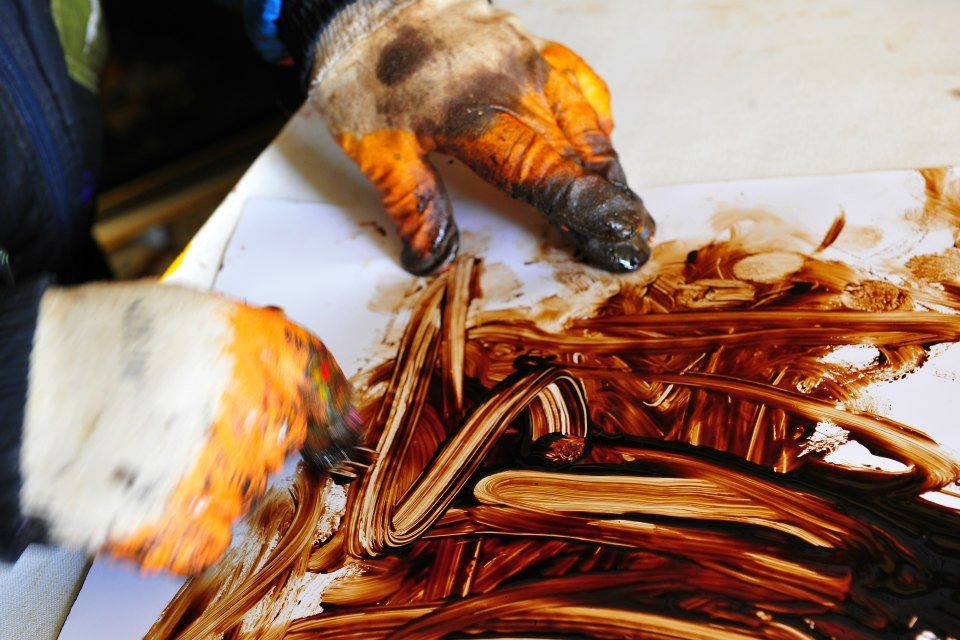 Since he was a child, Azerbaijani artist Sabir Chopuroglu has painted with a unique type of oil: petroleum. (Photo from Chopuroglu's official Facebook account)

One day, when he was seven years old, Sabir Chopuroglu's parents brought home a small bottle of petroleum from Naftalan, the Soviet sanatorium famed for its medical treatments involving bathing in oil.

Instead of the medical potential, however, Chopuroglu saw creative possibilities. Attracted by the strange smell he poured it on the floor, and using his hands, drew horses and trees on the white walls of his house. His parents, naturally, weren't pleased. But it proved to be the beginning of a unique artistic career. Now 62, Chopuroglu has made a successful career out of this particular style of oil painting.

He moved from his family's village in Dmanisi to go to art school in Tbilisi and then Baku, where he worked on developing his childhood technique. He went to the Baku neighborhood of Bayil, where oil oozes out of the ground and sits in puddles. He scooped up some of the oil, took it into his studio and started experimenting. “I knew Baku as an oil city, and that inspired me,” he said.

He still paints with the kind of oil usually processed into fuel, though these days he mixes it with acrylic, tempera or oil paints. The result is a sepia tone, unmistakable as crude oil. He says he has sold over 500 paintings, with foreigners his best clients. He's even patented the unique paint mixture in Azerbaijan.

Oil is not only the medium for Chopuroglu's paintings, but often the theme, as well. Derricks, oil workers, and the petroleum-rich Caspian Sea figure often in his paintings, along with other Azerbaijani cultural motifs like Baku's medieval Maiden Tower, Silk Road caravans, carpets, and traditional musical instruments.

Chopuroglu is far from the first Azerbaijani artist to have been inspired by oil. Since the 19th century, when Baku was the world's first oil boom town, Azerbaijani arts have been tightly connected to oil. Poets and writers like Mirza Alakbar Sabir, Abdulla Shaig, Suleyman Sani Akhundov, and Mir Jalal Pashayev have explored the wealth brought to Azerbaijan by oil, as well as the social injustices it has wrought.

The first-ever film shown in Baku, in 1898, began with a short, “Fire at the Oil Gusher in Bibi-Heybat.” The first full-length feature film of Azerbaijan by Boris Svetlov, one of Baku's most significant early filmmakers, was the 1915 “In the Realm of Oil and Millions,” was funded by some of the city's oil barons and depicted the story of a poor man who becomes rich from oil and then tragically loses it all.

“Oil was our main source of wealth and our main cause of problems,” wrote cultural critic Rahman Badalov. “Therefore, it's only natural that Azerbaijani cinema would start with an episode about an oil gusher.”

The subject was particularly rich for art created during the period of Soviet socialist realism. The 1933 “Symphony of Oil,” documented a gushing oil well and workers' efforts to get it under control, with the score synchronized to the pulsing of the oil and the exertions of the workers.

The prominent Soviet Azerbaijani composer and student of Dmitri Shostakovich, Gara Garayev, wrote the score for a 1958 documentary, A Story About the Oil Workers of the Caspian Sea.

Many prominent Soviet Azerbaijani painters took up residence at Neft Daşları (Oil Rocks), the world's first offshore oil platform, in the Caspian Sea, and heroically depicted the everyday lives of the oil workers there.

Since gaining independence, Azerbaijan has experienced a second oil boom. But this time, it's had relatively little effect on art, said Elmir Mirzoyev, a cultural critic and composer. “It is impossible to speak of radical developments in the art and cinema of Azerbaijan, despite the fact that over the last 15 years the country has received a fair amount of money,” Mirzoyev told Eurasianet. “That some young writers have made some innovations is not because of the oil wealth, but in spite of it.”

Still, oil has seeped its way into the country's contemporary art. Painter Tora Aghabayova presented a solo exhibition, titled Oil and Dreams, in 2011 at London's Royal Opera House Arcade, depicting oil's influence in wry, ironic ways, such as a classical nude in a hard hat painted against a background of petroleum processing plants.

Meanwhile, multimedia artist Teymur Daimi caused a minor scandal in Berlin after the Azerbaijani authorities reportedly blocked his oil-themed short film, “The Black Paradise,” from being shown because of its critical portrayal of Azerbaijan.

In conceptual artist Orkhan Huseynov's video piece Oil Drinking, two men in bright orange jumpsuits apparently drink oil as if it were tea. In another work, Splash, he shows a stylized, raised fist grabbing oil that squirts away.

“Oil has existed in our art for more than 100 years, it's part of our culture,” Huseynov noted in a 2011 interview. In Splash, he addresses the ephemerality of oil. “Keeping something liquid, it's impossible, it just leaks or explodes. You can't possess it.”