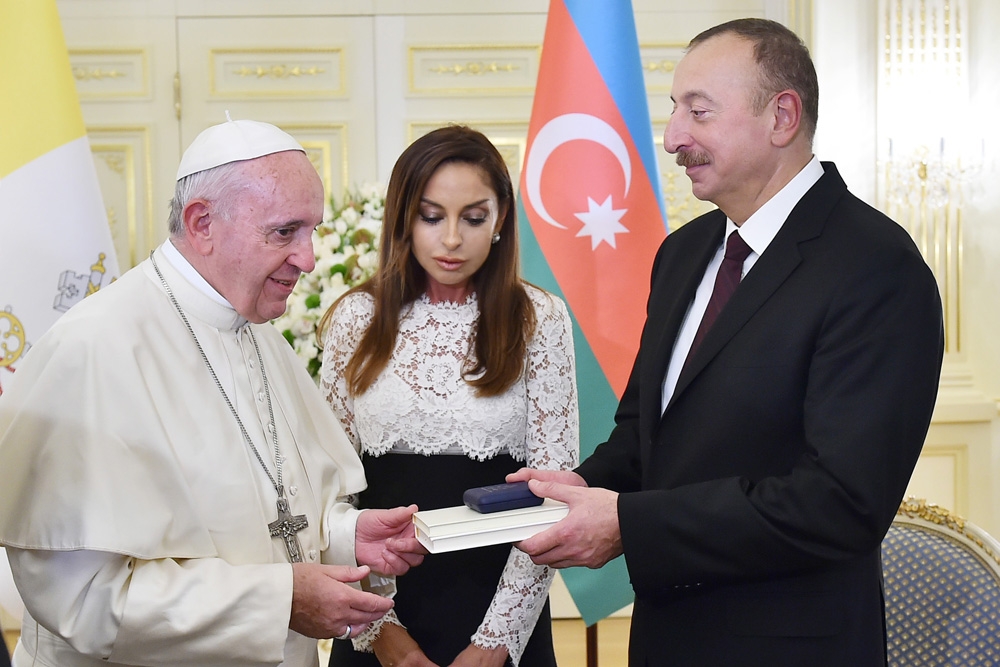 The Roman Catholic Church’s Pope Francis extolled multiculturalism on October 2 in Baku with Azerbaijani President Ilham Aliyev and First Lady Mehriban Aliyeva, both of whom he has met before. (Office of the President of Azerbaijan)

At first glance, Azerbaijan, a predominantly Shia Muslim state, seems an unlikely destination for the leader of the Roman Catholic Church. But Pope Francis’ 10-hour visit to Baku on October 2 was not so much about religion as it was about PR payback.

Since 2012, the Heydar Aliyev Foundation, run by Azerbaijan’s first lady, Mehriban Aliyeva, has donated undisclosed sums to finance restoration work at the Vatican, including repairs to the Sistine Chapel.

The Foundation, named in honor of President Ilham Aliyev’s father and predecessor, the late Heydar Aliyev, also has provided funds for other projects, including the restoration of two Vatican catacombs and the preservation and digitization of ancient manuscripts in the Apostolic Library.

In 2012, the Vatican termed the catacombs donation the first of its kind by a predominantly Muslim country, although Azerbaijan’s government is secular in nature. Vatican officials did not respond to a question about whether other predominantly Muslim states have supported similar projects.

The Foundation’s official interest in preserving European cultural heritage has extended beyond the Vatican.

Seven years ago, the foundation provided 40,000 euros (at the time, about $57,253) to finance repairs to two stained-glass windows in France’s Cathédrale de Notre Dame de Strasbourg, and later contributed to the restorations of two medieval Norman churches.

“There’s no other such example of a Muslim country restoring Christian churches and museums throughout all of Europe,” said Elkhan Şahinoğlu, head of the non-governmental Atlas research center. Funds also have gone to the Louvre, Versailles, Germany’s Berlin City Palace and Italy’s Capitoline Museum. “Baku and the Heydar Aliyev Foundation are propagandizing the idea of [the] Azerbaijani people’s tolerance toward all other peoples and religions.”

Foundation representatives did not respond to questions about its relationship with the Vatican. It does not appear to have a similar relationship with Azerbaijan’s Catholic community of several hundred – reportedly, mostly foreign – believers.

The Aliyev foundation is widely perceived in Baku as a quasi-governmental agency, and its involvement in Vatican restoration project is seen by some local experts as an extension of the government’s foreign policy.

“There is more than a bit of realpolitik,” said Şahinoğlu. “The tiny country of the Vatican has enormous influence in the Christian world. And by helping the Vatican with restoration, the leadership of Muslim Azerbaijan hopes for support … from the pope’s side.”

If that is the foundation’s aim, it appears to be working – at least in terms of helping to promote Azerbaijan as a country that values multiculturalism.

In October 2 comments to a Baku audience, Pope Francis hailed what he described as “good relations” between Azerbaijan’s Muslim, Catholic, Orthodox Christian and Jewish citizens, saying that they “assume great significance for peaceful coexistence and for peace in the world.”

In that spirit, he urged Azerbaijanis to “grasp every opportunity to reach a satisfactory solution” to its decades-long conflict with Armenia over the separatist, ethnic-Armenian-controlled Nagorno-Karabakh region, so that the Caucasus can become “a gateway open to peace.”

President Ilham Aliyev, who has declared 2016 a “year of multiculturalism,” provided the refrain: “This visit is very important for all of humanity,” he stated, local news agencies reported. “Because this visit again shows that dialogue between civilizations is alive [and] continues.”

The trip to Baku followed a September 30-October 1 papal mission to neighboring Georgia and an earlier trip to Armenia.

Public opinion appears to be mixed about the connection to the Catholic Church. While many believe that the donations to the Vatican illustrate their country’s generosity and tolerance, others, noted Şahinoğlu, wonder why the funds are not being spent on domestic needs, given that Azerbaijan’s economy has been hit hard by the drop in energy prices. Energy exports are the primary source of revenue for the government.

“Why restore museums throughout Europe, if the economic and social situation in Azerbaijan is worse than in European countries?” Azerbaijanis ask, according to Şahinoğlu.

The Vatican, which is now trying to make its finances more transparent, did not explain how the Foundation was chosen as a donor, and what mechanisms, if any, were used to check the donated funds’ origins. The source of the Foundation’s financing has never been made public.