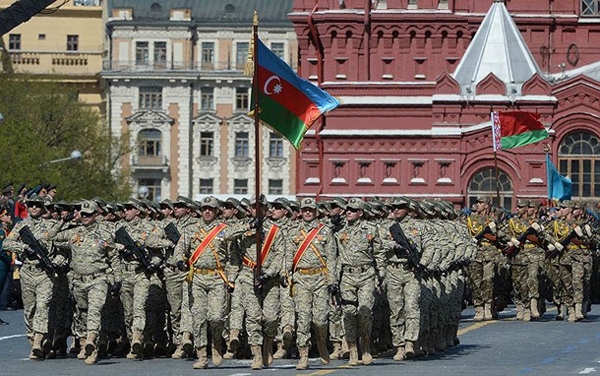 Top: the photo published by the Azerbaijan Ministry of Defense. Below: from the twitter account of Armenia MFA spokesman Tigran Balayan.

Azerbaijan's Ministry of Defense published a photo of its soldiers in Moscow's May 9 Victory Day parade in which an Armenian flag has been digitally edited out.

Armenia and Azerbaijan were among a number of countries whose soldiers marched in the parade, marking 70 years since the allied victory in World War II. And thanks to the fact that they are next to one another alphabetically, they marched one behind the other in the parade.

While the parade went off without a hitch, the controversy began soon afterwards. Azerbaijan's Ministry of Defense published a photo of its soldiers on its website, which web users quickly identified as an alteration of a previously published photo which was a good shot of the Azerbaijani contingent but -- unfortunately for Azerbaijan military PR -- prominently featured the flag of the Armenian soldiers right behind.

The episode caused some embarrassment within Azerbaijan, as well. "It's an obvious Photoshop," prominent military analyst Uzeir Jafarov told the BBC Russian service. "Our soldiers are in a ceremonial parade. They have Israeli weapons in their hands, conforming to NATO standards -- and all this for a photo shoot? It's unworthy of us." (The Azerbaijan MoD declined to comment.)

It's unclear where the original photo came from, but it seems to have been part of a photo essay, credited to Kommersant, and published in several places -- including Azerbaijani website minval.az, which published the photo with the Armenian flag. And it turns out that the photo isn't even of the parade itself, but from the rehearsal the day before.

There was already a political shadow over the event, as NATO countries boycotted the event over the Ukraine crisis, apparently seeing it as a political event legitimizing Russian President Vladimir Putin's rule rather than as an earnest commemoration of World War II. So, it could be seen as a small victory that Armenia and Azerbaijan soldiers even agreed to show up in the same place as one another. In recent years the two countries have come closer and closer to war over the territory of Nagorno Karabakh, de jure part of Azerbaijan but de facto controlled by Armenian forces since the early 1990s.

"The hope that May 9 would become a day in which, at least for a short while, could bring peace to the relations of the neighbors, was dashed fairly quickly -- on the official Azerbaijan MoD website published a photo in which the Armenian flag was erased," wrote Russian website regnum.ru. "And not very well at that -- the historical museum [visible behind the soldiers] lost a window." (Indeed, looking at the two photos, the alteration makes some substantial changes to the facade of the museum building.)

Azerbaijan, incidentally, was itself the victim of a recent geopolitical Photoshopping at the hands of an unfriendly neighbor. Last year, an Iranian newspaper printed photos of the soccer team Atletico Madrid, then sponsored by Azerbaijan, with the "Azerbaijan: Land of Fire" logo airbrushed off the players' jerseys.