Azerbaijan: Is Platform for Peace an Olive Branch or PR Stunt? 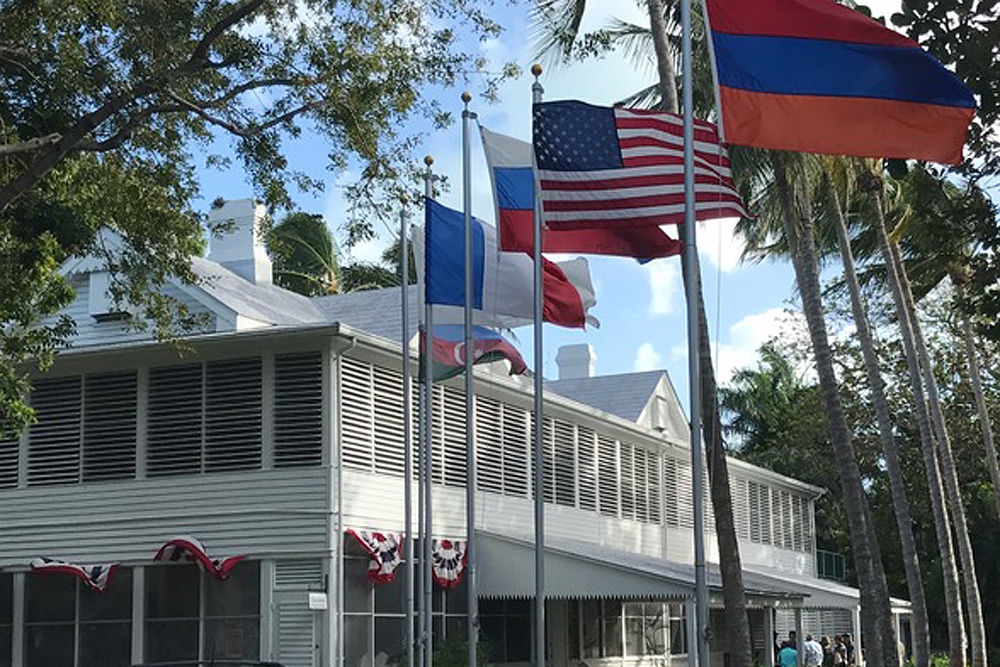 The Truman “Winter White House” in Key West, Florida (pictured here) was the scene of peace talks in 2001 that reportedly produced a tentative framework for resolving the Karabakh conflict. Both sides subsequently walked back from the Key West framework, and the conflict remains “frozen” due to the lack of a political settlement. (Photo: Peter Burke)

At a time when the prospects for peace between Armenia and Azerbaijan seem as bleak as ever, the unprecedented appearance in Baku of several Armenian activists has come as somewhat of a surprise.

To call this a quixotic effort would perhaps be an understatement. For one, the Armenians involved in the project are obscure, with little credibility in Armenia.

“The people involved from the Armenian side are mostly little-known and have left Armenia with scandals, or have been granted asylum in European countries – that raises many questions and suspicions,” said Stepan Grigoryan, a Yerevan-based analyst who has been involved in previous non-official dialogues between Armenia and Azerbaijan, known as Track II diplomacy, in an interview with EurasiaNet.org.

In addition, their statements from Baku are unlikely to resonate much in Armenia. One of them, Syusan Djaginian, speaking at the November conference, accused Armenian President Serzh Sargsyan of “genocide, not only against Azerbaijanis, but against the Armenian people.” Another participant, Vahe Avetiyan, told the conference that “international law requires respect toward territorial integrity and state sovereignty.”

“Fewer than 1 percent of Armenians support these principles,” said Thomas de Waal, a senior fellow at Carnegie Europe, in an interview with Armenian news website hetq.am. He describes the initiative as “a road to nowhere.”

But Baku seems to believe that it may be possible to undercut the Armenian government’s support among Armenians, and that this sort of initiative can help achieve that aim.

Public opposition in Armenia to Sargsyan’s administration seems to be rising, as was vividly illustrated last summer, when a group of ultranationalists seized a Yerevan police station and took hostages, and Armenians came out into the streets to support the hostage-takers against the government.

One of the sources of public discontent that fueled the hostage-taking episode was a perception that Sargsyan was soft on Karabakh, and supposedly willing to make concessions to Azerbaijan. Even so, Baku seems to believe that it can use this sort of soft power to help peel off support from Sargsyan.

“The Armenians who came to Baku, by their own admission, are under constant pressure from the Armenian authorities,” wrote Ramiz Mehdiyev, head of the Presidential Administration of Azerbaijan, in an article that he published a week before the Peace Platform’s founding.

“Such an unfortunate situation for Armenian human rights activists can be explained by the Sargsyan regime’s extreme intolerance towards his critics, which costs Armenia dearly and threatens the country with even more damage,” Mehdiyev added.

Baku may “naively” see the platform initiative as a means of reinvigorating negotiations over Karabakh, de Waal said. “We’re seeing attempts by Baku to find a means of pressure on the Armenian side,” he said. “This Baku platform should be interpreted in this context.”

For the first decade after Armenia and Azerbaijan signed a Karabakh ceasefire agreement in 1994, Baku encouraged genuine contacts between Armenian and Azerbaijani activists, primarily funded by European Union member states.

Starting in about 2009, the Azerbaijani government tried to sponsor Track II diplomacy itself. Some prominent Armenian officials, such as Gerard Libaridian, adviser to former president Levon Ter-Petrossian, were invited to Baku to participate in conferences, and state-run think tanks cooperated with Armenian counterparts to work on ideas for resolving the Karabakh conflict.

As official negotiations over Karabakh stalled, Azerbaijan’s government soured on these Track II efforts. And in recent years, Azerbaijani officials had become hostile toward them: Three of Azerbaijan’s most prominent peace activists, Arif and Leyla Yunus, and Rauf Mirgadirov, who had for years led dialogues with Armenian counterparts, were imprisoned in 2014 on charges including spying for Armenia. Arif and Leyla Yunus were released in 2015 and Mirgadirov in 2016.

Even some representatives of Azerbaijan’s civil society sector – which is often under direct or indirect control of the state – have responded with hostility to some previous Track II endeavors. In 2014, a joint statement initiated by two public figures, former high-ranking government officials from each country, Eldar Namazov and David Shahnazaryan, faced opposition from some in the Azerbaijani elite. “If the peace process doesn’t yield any results at the presidential level, then there is no meaning in our dialogues,” said Sahib Mammadov, Chairman of the Citizens’ Labor Rights Protection League.

Some in Baku express concern that the Peace Platform may in fact be a means of monopolizing Track II diplomacy and bringing it under tighter government control.

“Local civil society actors might feel pressure to join the platform, which could endanger their confidence building measures in different frameworks, in particular in regards to cross-border cooperation,” said one civil society activist in Baku, who spoke to EurasiaNet.org on condition of anonymity.

Moreover, international donor organizations that have financed Track II processes by local non-governmental organizations could be paralyzed by being forced to exclusively support the Peace Platform and cut financing to other initiatives, the activist added.

Baku has made other moves recently intended as gestures toward Armenia. In 2012, it instituted a system to allow Armenians who had lived in Azerbaijan during the Soviet era to get funds from bank accounts that they had had there, and had not been able to access. And in October, President Ilham Aliyev said that Azerbaijan may accept Karabakh as “an autonomous republic,” a formulation he had not previously used.

Zaur Shiriyev is an Academy Associate at the Royal Institute of International Affairs (Chatham House).