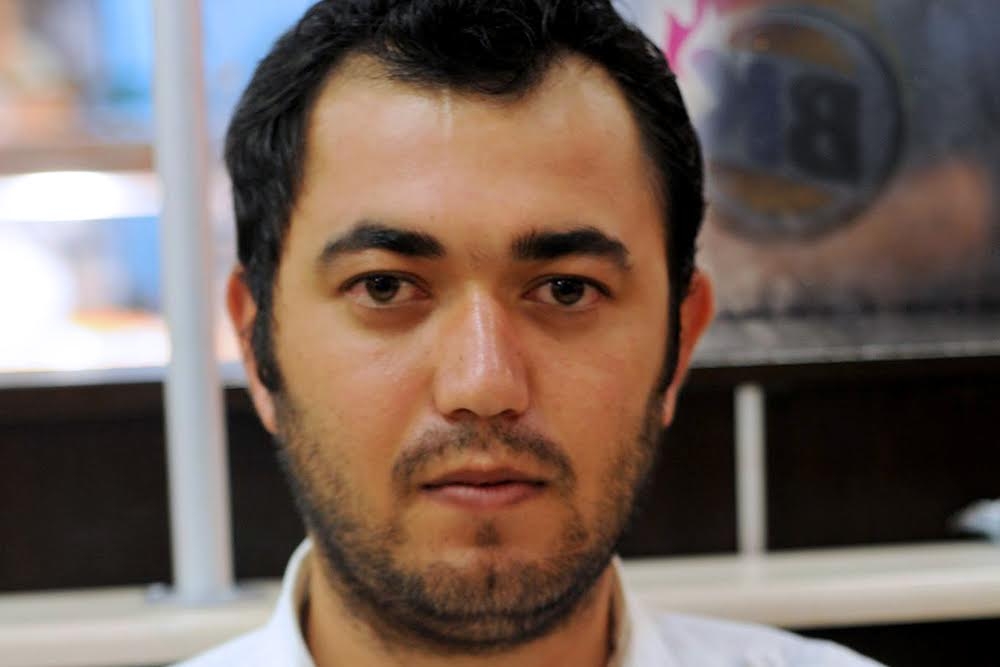 Rashadat Akhundov, a youth activist and board member of the NIDA Civic Movement, was sentenced to eight years in prison in May 2014. He was accused of organizing mass disorders, and illegal drugs and weapons possession. (Photo: Azadliq Radiosu/RFE/RL)

When civil-rights activists, journalists and others government critics are imprisoned in Azerbaijan, they tend not to go alone. Figuratively speaking, they often take family members with them.

The price that some pay for the political activity of their relatives can be severe, including job loss, harassment or simply the inability to raise a child with a spouse. In at least one case, it may have cost a life.

In September 2013, the 75-year-old grandfather of Rashadat Akhundov, a jailed youth activist for the NIDA civic organization, killed himself after additional charges of causing and participating in violent mass disturbances were brought against his then 29-year-old grandson. Along with seven other NIDA members, Akhundov had been imprisoned six months earlier on drugs and weapons charges, accusations that international rights organizations considered politically motivated.

Akhundov’s grandfather, Ayanat Akhundov, did not leave a suicide note, but family members, including Akhundov’s wife, Turkan Huseynova, who spoke with EurasiaNet.org, believe that the charges against his grandson, whom he had raised from childhood, were the cause.

Opportunities for political detainees to have contact with loved ones can vary, based on the prison and the prisoner. Standard rules allow prisoners to make 15-minute phone calls to relatives twice a week. In special cases, prisoners can be allowed extra calls. Charges are picked up by the prison, except for long-distance calls or to a cell phone. Monitoring of these communications is a given.

Prisoners and detainees can also receive visitors every 15 days, but this does not always happen. Officials refused for months to allow investigative reporter Khadija Ismayilova, who has been behind bars since early December, to see her mother or other relatives. After an international outcry, the restriction was relaxed for her 39th birthday this May.

As is the case with the loved ones of imprisoned government critics, friends and relatives of opposition leaders living in exile also are vulnerable to government harassment. In late July, authorities arrested a brother-in-law of Emin Milli, the outspoken leader of the opposition media initiative Meydan TV, ostensibly on a drug charge. Milli denounced the arrest as an act intended to coerce him into ceasing his political activity. Milli also claims that senior officials, including President Ilham Aliyev, have threatened his life.

Subsequently, 23 relatives took the unprecedented step of issuing an open letter to President Aliyev in which they publicly distanced themselves from Milli and denounced Meydan TV. “He has insidious thoughts and tries to present himself as a hero,” the letter alleged. Milli lamented the breach with family members, saying they acted under duress. In a statement posted on his Facebook page, he vowed to expand Meydan TV’s coverage of Azerbaijan. “Every attack against me and Meydan TV will … make us only stronger,” he wrote.

Prolonged separation is a source of stress for family members of most prisoners, not just political detainees. With still seven years to his sentence, Akhundov, the NIDA activist, is now the father of a two-year-old boy, Araz, born while he was in prison. He sees the child infrequently during prison visits.

For a few, the experience of imprisonment brought them closer together with loved ones. Uzeyir Mammadli, another NIDA activist who spent 21 months behind bars before being amnestied in late 2014, said that he managed to find a pocket of happiness in prison.

Twenty-eight-year-old French teacher and translator Aygun Pancaliyeva said she only understood that she was in love with Mammadli immediately after he was detained. “I wrote my confession [of my feelings] on a book cover and sent the book to him … in pretrial detention,” she said. The romance helped sustain him during his imprisonment. Mammadli said that he called Pancaliyeva “two to three times a week, once I had the chance,” and exchanged letters with her. They plan to marry in September.

Life after prison has been filled with hardships for many. For example, Mirza Sakit, a 56-year-old satirical poet, continues to struggle more than five years after his release. He was jailed in 2006 on a narcotics charge and amnestied three years later. He moved to Belgium when he could not find a job in Azerbaijan to support his wife and four children. He now lives off of state support.

Despite his travails, he harbors no bitterness about his time in jail. He recounted that he continued to write his anti-government poems in prison. “I wanted to show the regime that I am not afraid of them,” he explained.

While acknowledging that he “suffered a lot in prison,” Sakit added that “I got to know myself better.”

“Although I was isolated from society, I was free inside of myself,” he added.

Elections in Karabakh to go ahead in spite of coronavirus