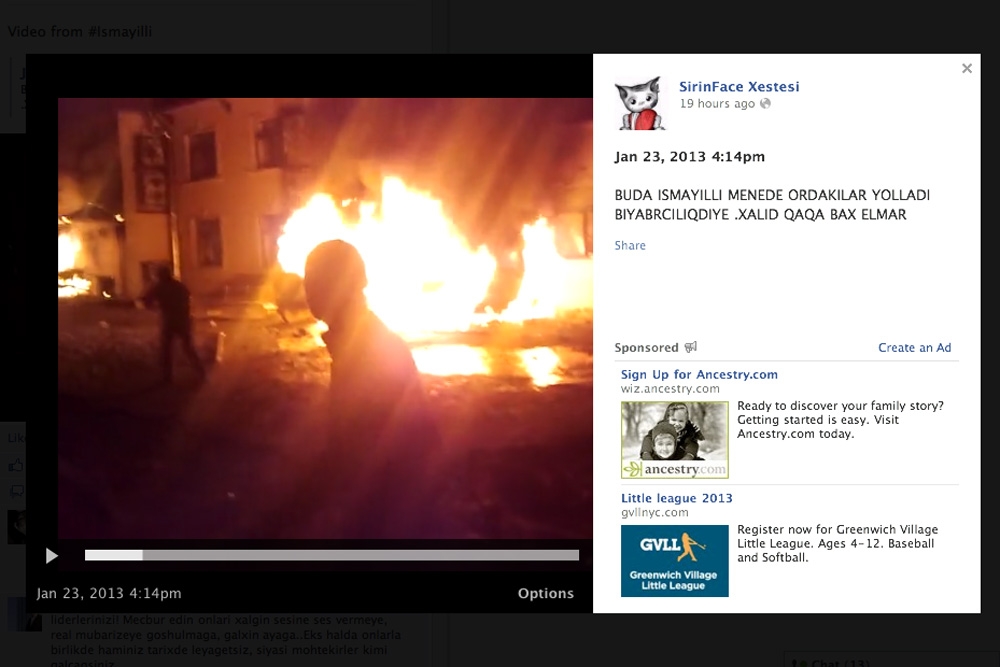 An auto wreck reportedly involving the son of a powerful politician sparked a rampage by residents in a provincial center in Azerbaijan. The incident suggests that Azerbaijan – an energy-rich Caspian Basin state, and a place where a small coterie around President Ilham Aliyev controls most economic opportunities while steadily restricting civil rights – could be heading toward a bursting point.

Rioting erupted in Ismayilli, a regional center roughly 200 kilometers (about 124 miles) northwest of Azerbaijan’s capital Baku, during the night of January 23. Law enforcement officials struggled to contain the violence, and it wasn’t until massive reinforcements arrived from neighboring areas that order was restored during the late afternoon of January 24. According to eyewitness accounts, several waves of clashes occurred, and police used tear gas and rubber bullets against rioters. Police cars also used megaphones to broadcast calls for crowds to disperse. In response protesters chanted “Resign” and “Freedom,” while hurling rocks and brickbats at police.

Ismayilli is currently in lockdown condition, with civilians ordered to remain indoors and all routes into and out of town blocked. Any male seen outdoors is being detained for questioning, local observers told EurasiaNet.org. According to Interior Ministry data, four people, including one police officer were hospitalized amid the rioting. Dozens were reportedly taken into official custody.
The mood in Ismayilli remained tense, and news agencies reported that fresh clashes involving hundreds of locals and security forces broke out after sundown on January 24. The region is home to a powerful family, the Alakbarovs. Fizuli Alakbarov is the country’s minister of labor and social protection, and his brother, Nizami, is the regional governor.

According to a report distributed by the Turan News Agency, Vugar Alakbarov, a son of the labor minister, appeared to be a central figure in the disturbance. Alakbaraov was allegedly in a Humvee sports utility vehicle that collided with a local taxi outside a hotel in the evening of January 23. The property reportedly is owned by Nizami Alakbarov. No injuries were reported in the crash, but, according to witnesses, Vugar Alakbarov assaulted the taxi driver while local police did nothing to intervene. The seeming sense of impunity with which Vugar Alakbarov acted outraged onlookers, setting in motion an upward spiral of emotion that culminated in pitched street battles involving thousands of locals and initially overwhelmed law-enforcement authorities.Property belonging to the Alakbarovs appeared to be the prime target of the rioters. The Humvee reportedly driven by Vugar Alakbarov and another auto were torched, as was the Hotel Chirag that supposedly belonged to his uncle. The mob then moved on to a villa believed to be owned by Nizami Alakbarov, ransacking it and burning two cars in the courtyard. Later, rioters destroyed commercial facilities in town allegedly owned by Alakbarov family.

The scope of the mob's fury sent authorities both in Ismayilli and Baku into full spin mode. Local police officials and, later, Azerbaijan’s Interior Ministry issued statements denying that the minister’s son, Vugar Alakbarov, had been involved in the incident. According to local police, Alakbarov was not in the region at that day. An Interior Ministry statement asserted that the trouble was provoked by the Chirag Hotel’s manager, Emil Shamsaddinov, and an associate, identified as Elmaddin Mammadov. “Both have been detained by police,” according to the ministry statement.

Meanwhile, the Mediaforum.az news agency distributed an interview on January 24 with the local governor, Nizami Alakbarov, who also insisted that no member of the Alakbarov clan was involved. “Neither my nephew, nor any other relative was there,” Nizami Alakbarov claimed.

The whereabouts of Vugar Alakbarov on January 24 could not be verified. If he was involved in the initial incident, he apparently slipped away as the protest gathered momentum.

The governor went on to suggest that provocateurs were to blame for manufacturing a crisis. “Some aggressive forces pointed the crowd to my house and pogrom was organized,” he said.
Local residents vigorously dispute official statements, insisting that Vugar Alakbarov was at the center of the incident. “We [local residents] are not idiots to make a pogrom if he was not there. Vugar is known in the region, and it was he who was beating a taxi driver there,” one protest participant, who did not want to be named for fear of official retribution, told Eurasianet.org by telephone on January 24.

The witness added that frustration among locals was high with Nizami Alakbarov’s leadership, which he described as high-handed and “repressive.”

“People are unhappy with the corruption and obstacles [hindering] farmers and businessmen that are created by the local administration. We are tired with unemployment, poverty, corruption and the climate of fear,” the local resident said.

Lending credence to the witness’ claim of widespread frustration with Alakbarov’s administration, news reports and videos posted on social networks showed rioters during the morning of January 24 gathering outside Ismayilli’s executive authority building and calling for Alakbarov’s resignation. The governor in his published comments gave no hint that he was contemplating resigning.

Musa Yagub, a former MP from the Ismayilli region, said in an interview with Azadliq Radio that the unrest was the outgrowth of abuse of power on the part of authorities. “It was clear that people are angry and not happy with their life. But local officials continued corrupt practices and even offended people,” Yagub said.

Ali Hasanov, an aide to President Aliyev’s office, told to APA news agency that “those responsible for organizing unrest in Ismayilli have already been detained and of course all of them will be punished.” Aliyev is in Switzerland, participating in Davos economic forum.

In March 2012 a similar outburst of unrest occurred in the Guba Region, resulting in the resignation of the governor there, Rauf Habibov. It is not immediately clear if Aliyev’s administration will take action to push Nizami Alakbarov out of office in Ismayilli.